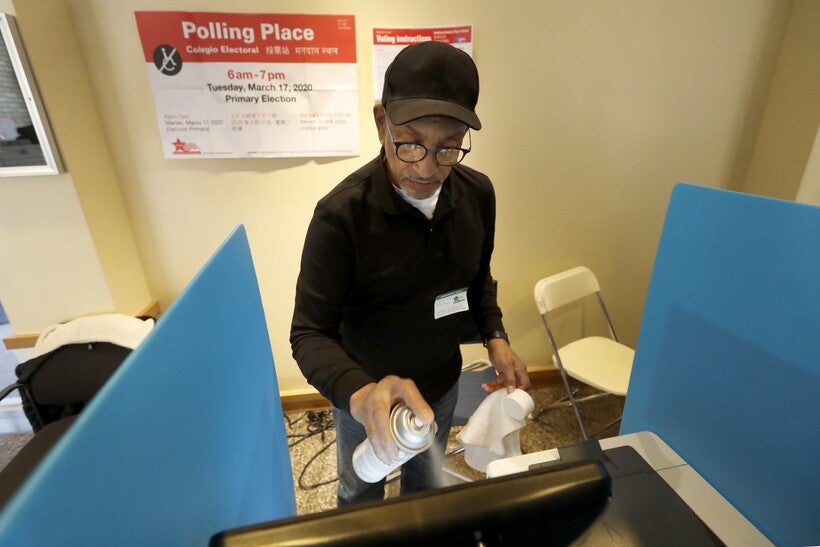 Nearly 60 percent of Wisconsin municipalities are reporting a shortage of poll workers ahead of Wisconsin's April 7 election as volunteers continue to bow out of their duties amid the continued spread of COVID-19 in the state, the Wisconsin Elections Commission said Tuesday.

During an emergency meeting of the Elections Commission Tuesday morning, Commissioner Julie Glancey raised the concern that "this election is going to go down as probably one of the worst elections in Wisconsin history."

Many poll workers are more than 60 years old and are at higher risk of developing serious symptoms if they contract COVID-19.

The poll worker deficiencies are being reported statewide as election officials continue to contend with the far-reaching effects of the pandemic on administering the April 7 election, which features the Democratic presidential primary, a state Supreme Court race, and numerous local elections.

According to Meagan Wolfe, administrator of the Elections Commission, local election officials have been given the go-ahead to consolidate polling places, if necessary. They must publicize any consolidation of sites and make sure voters know where to go on Election Day, she said.

Wolfe also said the commission has been working with clerks and the state Department of Administration to recruit more poll workers from colleges and universities and labor unions, as well as state employees.

However, clerks reported in the survey that despite those efforts, the worker shortage continues to grow.

"My concern is we are pretending with sort of our fingers crossed and unicorn wishes that we're going to be able to cobble together a way to administer this election," Jacobs said.

The Elections Commission doesn't have the power to delay the election. That decision would have to come from the state Legislature or the courts.

Republican legislative leaders have said the election should proceed as scheduled. Gov. Tony Evers agrees with them. A ruling in a federal lawsuit looking to delay the election could come any time.

During the meeting, commissioners failed to come to any consensus on offering an official opinion to the federal court on the best path forward.

"I think that we can have a good election on April 7," Spindell said, citing poll worker recruitment efforts by the Republican Party of Wisconsin.

Opponents of delaying the election have argued any delay would leave vacancies in a number of local offices on the April 7 ballot, like county executives, county boards and mayors.

"The issue of vacancies is a huge issue, especially during a time of crisis," Knudson said.

Commissioners also used Tuesday's meeting to discuss concerns about clerks processing a huge influx of absentee ballots on Election Day. Officials have been encouraging all Wisconsin voters to vote by mail.

According to commission statistics, 942,350 mail-in ballots had been issued statewide as of Tuesday morning. Only 337,563 have been returned.

"There is an avalanche coming at the clerk’s (offices)," Commissioner Mark Thomsen said during the meeting.

The deadline for requesting an absentee ballot is April 2. They must be returned to local officials by 8 p.m. on Election Day.

The commission is working with local officials as many begin to work on potential drop-off locations for ballots other than clerk’s offices. Those other locations could include library return receptacles. The drop-off option is being considered as some worry about ballots mailed close to Election Day making it back to clerks in time to be counted.

"If people under the law have the right to request the ballot until (April 2) and the post office is saying 7 days both ways, there’s no way that ballot is going to make it back on time," Thomsen said.

Commissioners also discussed the possibility of many clerks having to delay reporting vote totals until after Election Day, as processing absentee ballots takes longer than traditional ballots. Absentee ballots need to be inspected before they are unsealed, to make sure the envelope has all the required signatures and other information, like the address of the voter’s witness.

Commission staff also used the meeting to update commissioners on supplies being sent out to clerks across the state.

The commission has purchased 750,000 isopropyl alcohol cleaning wipes, 5,830 liters of multi-purpose sanitizer and 1.5 million disposable pens for use at polling places.