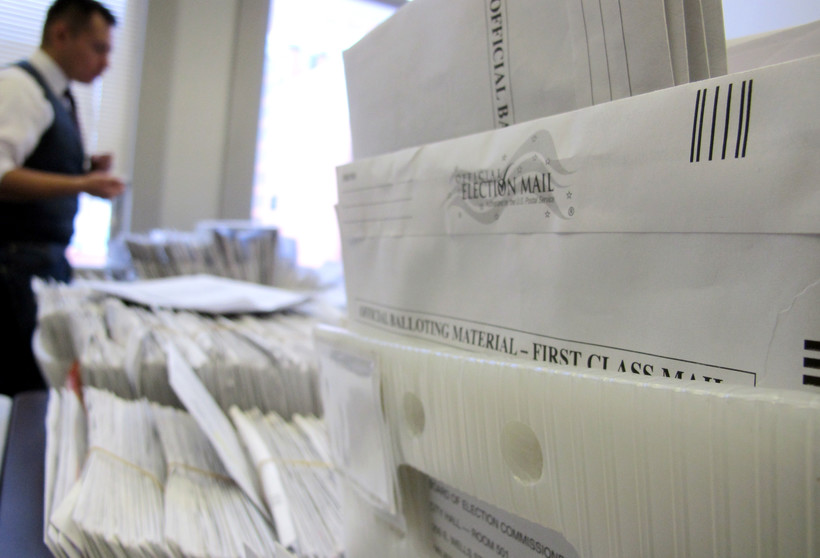 County clerks in Madison and Milwaukee are telling voters housebound during the COVID-19 pandemic how to bypass Wisconsin’s voter ID requirements when requesting a mail-in ballot for the April 7 election — a move that is drawing sharp criticism from some Wisconsin Republicans.

Milwaukee County Clerk George Christenson and Dane County Clerk Scott McDonell posted updates on their respective Facebook pages Wednesday telling voters they could indicate they are "indefinitely confined" when filling out an online form to request a mail-in ballot.

After indicating they are "indefinitely confined," voters are allowed to bypass a normal absentee ballot application requirement: uploading a copy of a valid ID for voting, like a driver's license.

McDonell said his office has been "inundated" with calls from voters, particularly senior citizens, who have had trouble uploading a photo of their ID with the application.

"They didn’t have the ability to upload a photo, they were being told to stay in their home (and) they want to vote," he said.

McDonell said everyone who is able should abide by the voter ID law, but the exception exists in state law specifically for those who can't.

"We’re all supposed to assume that we are ill, and the people around us are ill, and that’s exactly what it says in the law: if you’re ill, if you’re disabled (and) you’re unable to complete your vote because of that, that’s why this exception is there," he said.

Christenson said he is "not advocating to break any law." He also believes this is a legal application of the provision.

"I think the public has the right to know their options," he said.

The Republican Party of Wisconsin was quick to raise the alarm about the guidance.

Andrew Hitt, chair of the party, said the clerks are encouraging people to apply the "indefinite confinement" provision too broadly.

"They can come up with these little examples here and there that may be legitimate — that's not what they're doing," he said.

Hitt said the clerks should do more to help people having problems uploading or getting copies of their IDs for the application.

"These clerks seem to be taking advantage of the time of need instead of getting out there and helping," he said. "It’s sort of sad, when we should all be coming together, these clerks are using it as an excuse. Grocery stores have figured out how to serve people, hardware stores, restaurants ... yet our local governments can’t figure out how to do an election on Election Day or how to help people vote in the run up to an election."

Christenson called the pushback "typical grandstanding by the party."

"If they are advocating that senior citizens, individuals at risk, should risk their health and defy the governor’s emergency order to leave the house to go vote or to try and get a photocopy of their ID, then they need to take a hard look in the mirror because this is about human safety, people’s safety and health," Christenson said.

"If different processes and procedures are to be incorporated in the electoral process due to a state emergency, that decision can and should be made by the Wisconsin Election Commission, not a county or municipal clerk," Bernier wrote.

The elections commission has issued guidance to clerks saying it does not condone abuse of the indefinite confinement option "as it is an invaluable accommodation for many voters in Wisconsin."

"During the current public health crisis, many voters of a certain age or in at-risk populations may meet that standard of indefinitely confined until the crisis abates," the guidance read. "We have told clerks if they do not believe a voter understood the declaration they made when requesting an absentee ballot, they can contact the voter for confirmation of their status."

The League of Women Voters of Wisconsin filed a federal lawsuit Thursday against the Wisconsin Elections Commission challenging the state’s requirement that mail-in ballots include a witness signature.

The lawsuit argues the requirement places an undue burden for some voters amid the COVID-19 pandemic.

"Not addressing this particular measure complicates the process for the voters of Wisconsin and would have the impact of depressing turnout or unnecessarily exposing vulnerable voters," said Debra Cronmiller, executive director of the League of Women Voters of Wisconsin, in a prepared statement.

The lawsuit calls for the signature requirement to be lifted for the election. It would not otherwise affect state election laws.

The legal challenge is the third directly related to Wisconsin’s April 7 election and the spread of the new coronavirus.

On Wednesday, Green Bay filed a federal lawsuit calling for the election to be postponed, citing health concerns for election officials and voters.

Last week, a federal judge issued an initial ruling in a case from the state and national Democratic Party calling for some state election laws to be lifted amid the pandemic.

The Republican Party of Wisconsin moved on Thursday to intervene in both lawsuits, voicing its opposition.