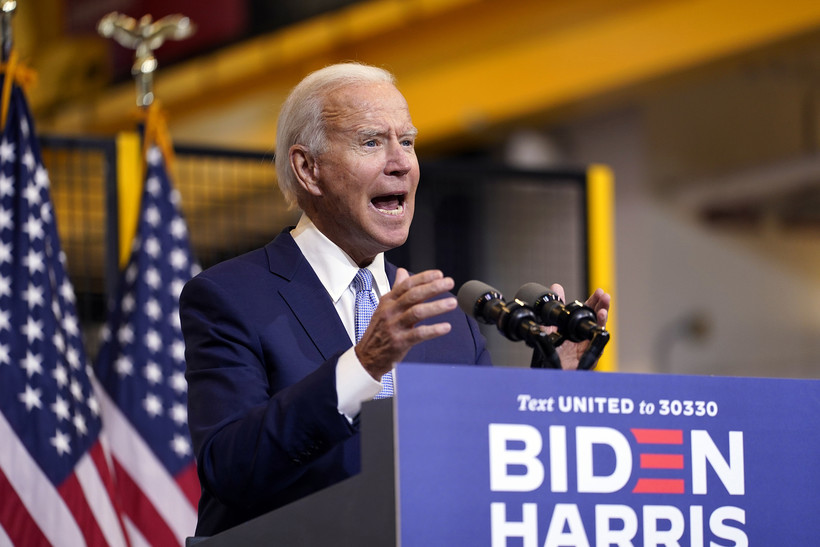 Democratic presidential nominee Joe Biden will visit Kenosha on Thursday, two days after President Donald Trump visited the city that has been rocked by protests and violence in the wake of the police shooting of Jacob Blake, a Black man, last month.

Biden’s visit will be the first time a Democratic presidential candidate has visited Wisconsin since 2012.

According to the former vice president’s campaign, Biden and his wife Jill will "hold a community meeting in Kenosha to bring together Americans to heal and address the challenges we face" and "make a local stop" afterward. Biden also plans to meet with Blake's family members, something Trump didn't do during his visit.

Republicans have been sharply critical of Biden’s lack of in-person appearances in Wisconsin so far this campaign season, arguing he has forsaken what is considered to be a key swing state in the presidential election.

"It shouldn’t take rioters burning down the City of Kenosha to get Joe Biden to visit our state," Hitt said in a prepared statement on Wednesday. "This desperation trip is about Biden’s support slipping as violent anti-Trump protestors are creating chaos around the country."

Trump’s Wisconsin campaign spokesperson, Anna Kelly, also noted how long it has been since Biden visited the state and said the stop is an "attempt to use a hurting community as a political prop for his failing campaign."

Democrats also accused the president of using unrest in Kenosha to score political points with his base. Gov. Tony Evers asked Trump not to visit Wisconsin ahead of his trip, saying his presence would "hinder our healing."

The governor’s office didn’t immediately respond to a request for comment about Biden’s upcoming campaign stop.

During the president’s visit Tuesday, which included a tour of damaged property and a roundtable event, Trump praised law enforcement and repeated campaign rhetoric about what he describes as radical, left-wing violence in cities across the country. He condemned conversations about systemic racism in the U.S. as "destructive."

Amber Wichowsky, professor of political science at Marquette University in Milwaukee, said she expects Biden to focus on themes like healing divisions and deescalating racial tensions.

"Biden’s going to want to talk about healing the country, bringing the country back together," she said. "I think this idea speaks to many of the themes he was raising earlier on the campaign trail."

Wichowsky noted Biden's visit is also an opportunity for him to shift the focus from how the president has talked about unrest in Kenosha.

"Actually coming to Wisconsin is a way to make sure that Trump is not framing this issue and making it be debated on his terms," she said.

Speaking to reporters on Wednesday, Biden said he believes the officer who shot Jacob Blake there at a minimum "needs to be charged."

Both Campaigns Unveil Ads About Kenosha

The announcement of Biden’s visit comes as both his and the president’s campaigns released ads focused on unrest in Kenosha on Wednesday.

The president does not have the power to deploy the Wisconsin National Guard. That power rests with Evers, who deployed the Guard less than 24 hours after a police officer shot Blake on Aug. 23.

Evers denied the Trump administration’s offer of Department of Homeland Security support later on Tuesday, according to his office, but on Wednesday accepted support from the FBI as well as help coordinating the deployment of other states’ National Guard troops to Wisconsin. Upon arrival, those troops from other states are directed by Wisconsin National Guard Adjutant General Paul Knapp. The National Guard has not been federalized.

The Trump campaign ad also paints Biden as a candidate who backs a "weak" response to protests and claims he supports the "defund the police" movement. Biden wrote a USA Today opinion piece in June saying he does not support calls to defund law enforcement.

The Biden campaign’s ad, "Be Not Afraid," uses footage from Biden speaking in Pittsburgh earlier this week. The former vice president condemns rioting and looting as "lawlessness" and accuses Trump of encouraging conflict.

"Fires are burning and we have a president who fans the flames," Biden says in the ad. "His failure to call on his own supporters to stop acting as an armed militia in this country shows how weak he is."

The president has so far declined to condemn the actions of Kyle Rittenhouse, the 17-year-old suspect in last week's shooting during the protests that killed two and injured one in Kenosha.

"Donald Trump adds fuel to every fire," Biden says. "This is not who we are."