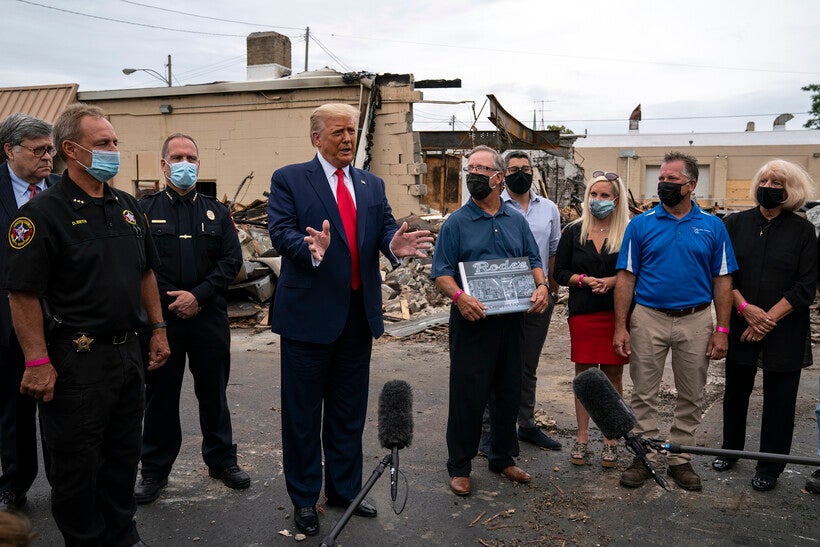 President Donald Trump speaks as he tours an area Tuesday, Sept. 1, 2020, that was damaged during demonstrations after a police officer shot Jacob Blake in Kenosha, Wis. Evan Vucci/AP Photo 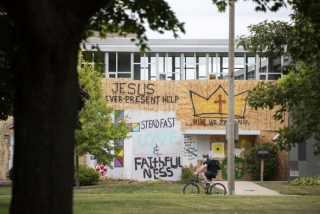 Wisconsin Lt. Gov. Mandela Barnes: Trump Will Use Every Opportunity To Divide People
Kenosha Protests, Violence Expose Racial Disparities Among The Worst In The Country

Kenosha was back in the national spotlight Tuesday with a visit from President Donald Trump.

The president's arrival came 10 days after the police shooting of Jacob Blake, a Black man, unleashed a wave of protests in the city along with widespread property destruction, deployment of National Guard troops and two protesters being fatally shot.

On the eve of his visit, Trump declined to condemn the actions of Kyle Rittenhouse, the 17-year-old suspect in last week's shooting during the protests that killed two and injured one, claiming without evidence that it appeared the gunman was acting in self-defense.

Trump went ahead with the visit despite calls from state and local officials, including Gov. Tony Evers and Kenosha's mayor, not to come to the city. They said the community should be focusing on internal healing, rather than gearing up for a presidential visit.

Trump arrived Kenosha at around 1 p.m., accompanied by U.S. Attorney General William Barr and Chad Wolf, the acting secretary of Homeland Security. The president toured parts of the city that were damaged by arson and looting, met with local law enforcement and National Guard members and participated in a roundtable event that included GOP members of Wisconsin's congressional delegation and local law enforcement leaders.

At the roundtable, Trump praised police officers, saying they're under pressure to make split-second decisions in the line of duty.

"They have a quarter of a second, quarter of a second to make a decision, and if they make a wrong decision one way or the other, they're either dead or they're in big trouble," Trump said. "And people have to understand that, they choke sometimes."

Several poster-sized photos of property damage in Kenosha were displayed during the roundtable discussion, although the president made little mention of Jacob Blake or the two people who were killed during protests. 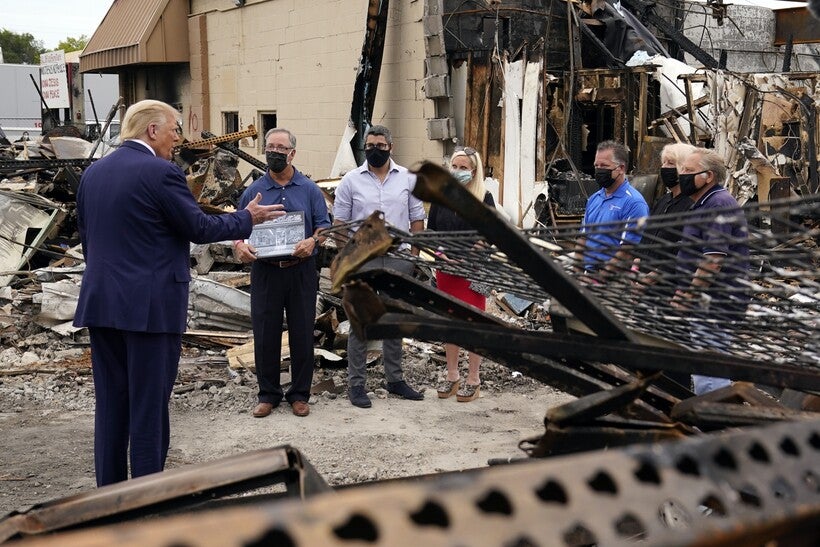 Trump used the visit to re-emphasize his presidential campaign themes about what he says is radical, leftist violence in Democratic-run cities.

"These are not acts of peaceful protest, but really domestic terror," he said.

"Reckless, far-left politicians continue to push the destructive message that our nation and our law enforcement are oppressive or racist," he said, saying he thinks more funding and support should be given to law enforcement.

"We must give far greater support to our law enforcement, it's all about giving them additional support, these are great people," he said.

According to a U.S. Department of Justice press release, the funding will "support community-based crime-fighting initiatives, local victim service programs, and the hiring and training of law enforcement officers and prosecutors."

Trump referenced Evers's deployment of the National Guard to Kenosha multiple times during the visit, which he had previously tried to take credit for himself.

"The minute they got here, (the violence) was over," he said, even though two people were fatally shot during protests after the National Guard was deployed.

At least three protest groups were planning to hold demonstrations in the city during Trump’s visit, including a day-long rally taking place in the city hosted by Jacob Blake’s family. Trump didn't meet or speak with members of the family, saying he would have spoken with Blake's mother but didn't want the family's lawyers to be involved.

Justin Blake, Jacob’s uncle, said he isn't interested in meeting with the president.

"We don't have any words for the orange man," he said. "All I ask is that he keep his disrespect, his foul language far away from my family. We need a president that's going to unite our country and take us in a different direction." 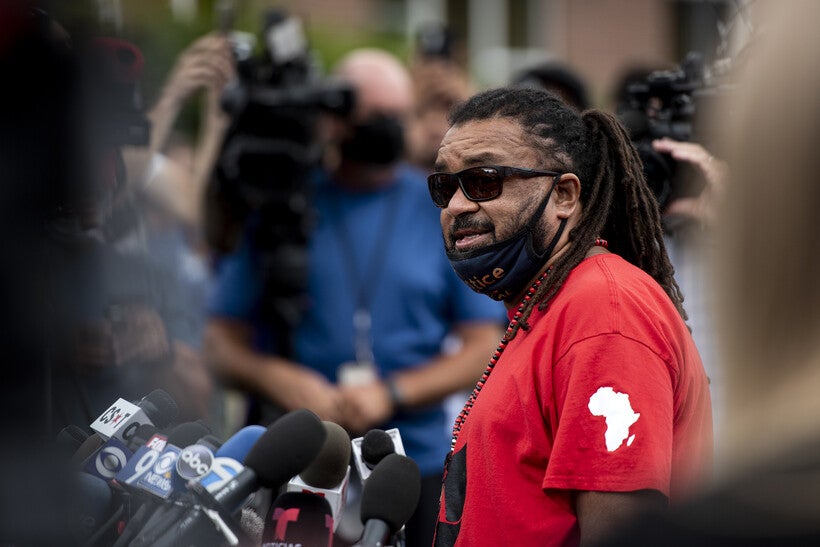 Blake said if former Vice President Joe Biden, the Democratic presidential nominee, comes to Kenosha, the family would like to meet with him and that a member of the Blake family has spoken with Biden and his running mate, U.S. Sen. Kamala Harris, over the phone.

Tuesday's rally was held on the street where Blake was shot in the back multiple times by Kenosha Police Officer Rusten Sheskey on Aug. 23. Blake remains hospitalized and partially paralyzed.

Justin Blake said the family won't leave Kenosha until Sheskey is indicted. The state Department of Justice is reviewing the case, and hasn't released a timeline for its investigation. 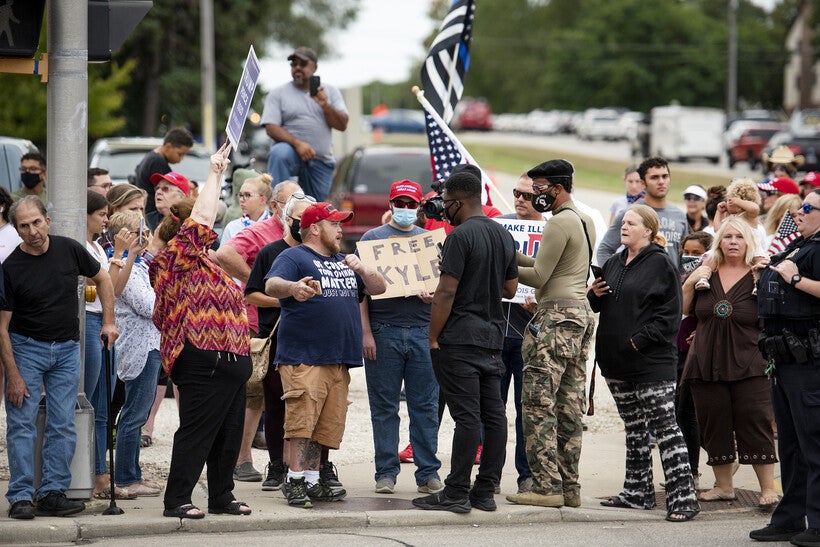 The rally was also attended by the Rev. Jesse Jackson, who said he would be doing community cleanup, voter registration, COVID-19 testing and U.S. Census work throughout the day.

While Trump spoke in Kenosha, the country's political divide was on display in the city's Civic Center Park, where last week protesters clashed with police and a steel fence still surrounds the county courthouse.

On Monday afternoon, Trump supporters repeatedly argued with Black Lives Matter activists, shouting over each other at adjacent rallies and in smaller shouting matches that popped up intermittently throughout the park. 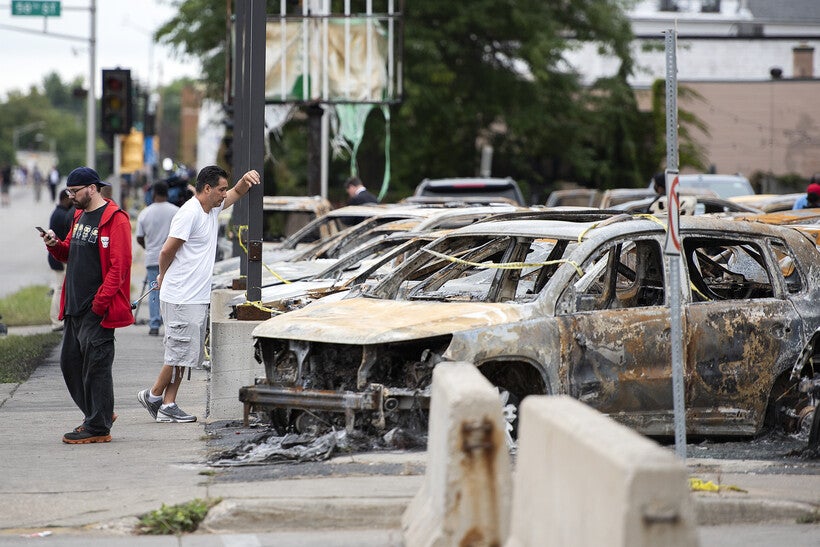 A man stands on a sidewalk near a lot of burned vehicles Tuesday, Sep. 1, 2020, in Kenosha. Angela Major/WPR

Niko Eastwind, of Chicago, said he made the trip to Kenosha because of what happened to Blake and the killings of Joseph Rosenbaum and Anthony Huber by Rittenhouse, who answered the call of a local militia group. He disputed the idea that Trump was in Kenosha to promote public safety.

"It's not about that," Eastwind said. "It's actually about giving these fascists a calling card, saying 'I support you.'"

Eastwind said Trump was exacerbating problems surrounding race in America by urging police to crack down. 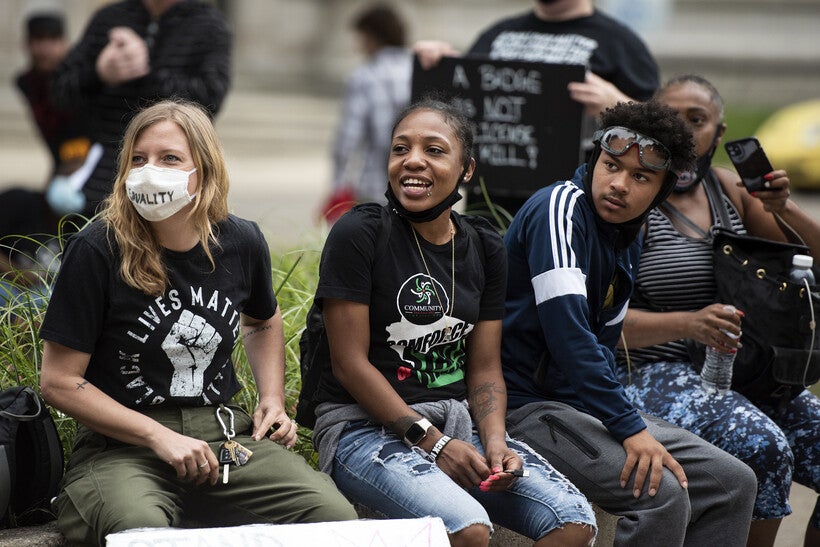 Protesters smile as they gather in Civic Center Park on Tuesday, Sep. 1, 2020, in Kenosha. Angela Major/WPR

"You've got to think, what does he mean by that and who's going to be the most affected?" Eastwind said. "It's going to be Black and brown people."

Michael, a Kenosha resident and Trump supporter who didn't give a last name, said he was glad the president visited.

"A president needs to come here," he said. "They need to come to these cities, and they need to see firsthand for themselves what's going on." 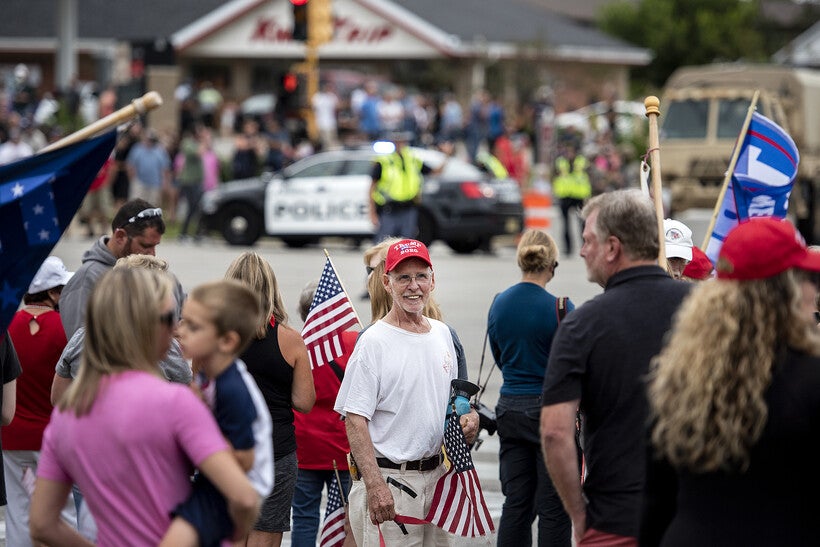 A man in a Trump 2020 hat smiles in a crowd of supporters Tuesday, Sep. 1, 2020, near Mary D. Bradford High School during President Donald Trump’s visit to Kenosha. Angela Major/WPR

Michael said he was among the crowds who shouted at one another Monday.

"You know, we all raised our voices," he said. "But I think people are just frustrated about everything."

According to the Kenosha Police Department, an emergency curfew will be in place in Kenosha east of Interstate 94 starting at 7 p.m. Tuesday night and 9 p.m. Wednesday through Sunday. 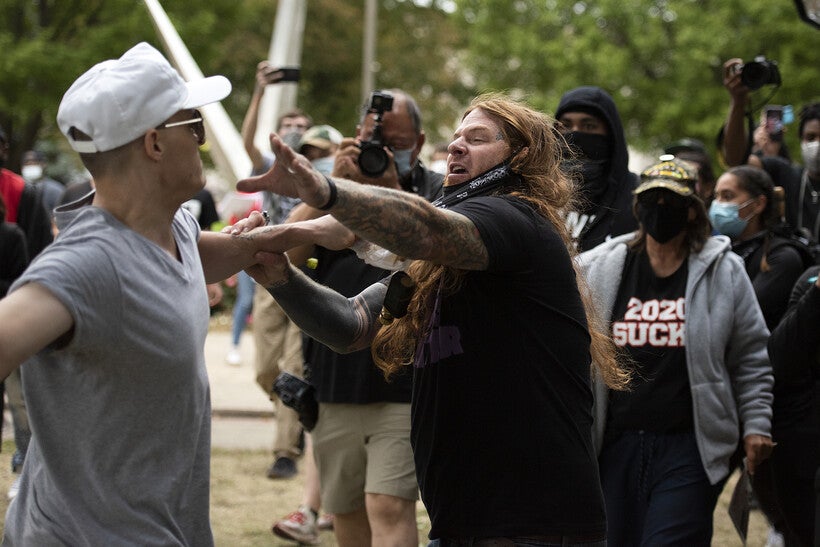 A man in a "Make America Great Again" hat, left, and a protester, right, fight after a tense argument Tuesday, Sep. 1, 2020, in Kenosha. Both men threw punches in the fight.  Angela Major/WPR