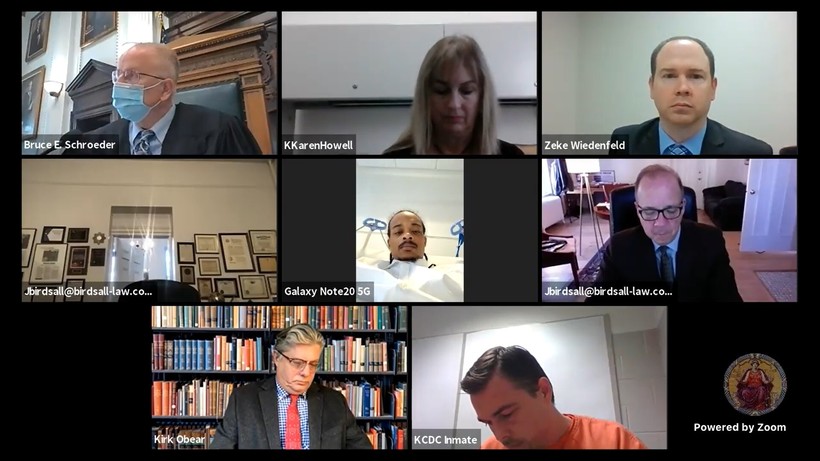 With Blake attending via Zoom from his hospital bed, attorneys spoke for less than five minutes before the case was postponed to next month.

The charges Blake is facing stem from an incident that occurred May 3, involving an alleged assault against the mother of his children.

In the hearing, special prosecutor Zeke Wiedenfeld planned to ask Kenosha County Circuit Court Judge Bruce Schroeder to allow him to admit evidence related to previous alleged attacks against the same woman. But Blake’s attorney, Patrick Cafferty, said he just received the motion from the prosecution and wanted a week to respond in writing.

"We have had some discussions about a potential resolution, but we don’t have a resolution to present to the court," Cafferty said.

The attorneys plan to have a possible resolution by Nov. 4, a week before Blake's trial is scheduled for.

The mother of Blake’s children called police several times over alleged verbal or physical clashes with Blake in eight years. On May 3, Kenosha police issued an arrest warrant. That warrant was active when police responded to a seventh call from the woman on Aug. 23, the day Blake, 29, was shot seven times in the back.

The allegations Wiedenfeld wants to present at Blake’s trial next month include:

Police had responded three times previously regarding arguments between the pair. No charges were filed in any of the incidents until May 3.

Meanwhile, Wisconsin Attorney General Josh Kaul's office is continuing to investigate whether Officer Rusten Sheskey was justified when he shot Blake. Earlier this month, Kaul provided a copy of the investigative file to Noble Wray, the former chief of the Madison Police Department and a consultant who has been retained in the case. Kaul said the investigation is nearly complete.

"We'll be preparing analysis that looks at the facts of the case and compares them to best practices for police, to be taking a look to see whether the practices that were taken here are consistent with law enforcement training or inconsistent with them," Kaul said Wednesday morning on WPR's "The Morning Show." "And at that point, after that happens, (Kenosha County District Attorney Michael) Gravely will take the file and will make a charging decision."

Kaul also said he would like to see more support for community policing efforts, "so we can strengthen relationships between law enforcement and people in the community where they work."

"I'd like to see funding for a hate crime hotline in Wisconsin," he said. I'd also like to see more training on implicit bias, cultural competency, critical incident training, and other training that can help improve law enforcement (and) community relations, and that help promote deescalation."