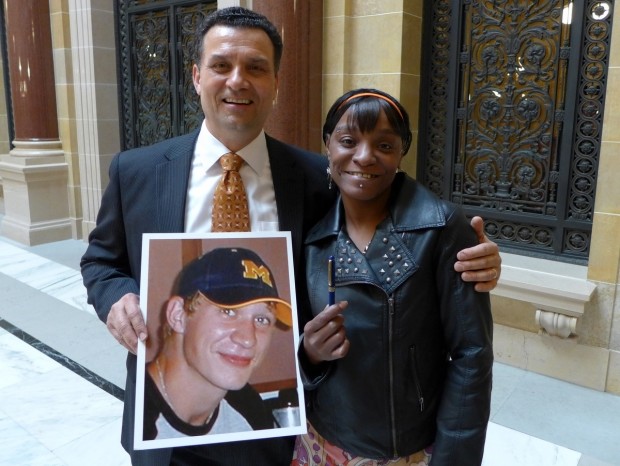 Michael Bell, Sr., left, and Sonya Moore embrace in this 2014 photo, after a bill was signed into law requiring outside investigations of deaths that occur in police custody. Shawn Johnson/WPR

Announcement In Blake Case Approaches, In A Process Born Of Another Kenosha Police Shooting

Kenosha erupted in protests just over three weeks ago after Jacob Blake, a Black man, was shot in the back seven times by white police officer Rusten Sheskey. And in many police departments across the country, a decision to charge the officer would have been made within days.

But not in Wisconsin. That's due in part to a police shooting in Kenosha 16 years ago that led to a law making Wisconsin the first state to require an independent investigation in such cases.

Wisconsin’s Attorney General Josh Kaul is heading the Blake investigation. He says his office has already conducted more than 80 interviews since the Aug. 23 shooting. Kaul said when he investigates officer-involved shootings, he aims to complete the investigation in 30 days.

That means an announcement could be made as early as next week.

"This is a case in which there is a lot of interest and obviously a lot of unrest in Kenosha in the immediate wake, but that doesn’t mean we are going to conducting this investigation any differently than we would conduct any other officer-involved shootings," Kaul said.

According to state investigators, Kenosha police were called to an apartment by a woman saying her boyfriend was violating a restraining order. Officers tried to arrest 29-year-old Blake and used a Taser on him twice. Blake was trying to get into his vehicle when Sheskey, holding onto his shirt, shot him in the back.

Sheskey is a seven-year veteran of the Kenosha Police Department and while his employment file hasn't been released, the one disciplinary action made public is a vehicle violation four years ago.

Blake’s family is pushing for Sheskey to be arrested and charged.

"We hope he’ll be fired," said Blake’s uncle, Justin Blake. "We hope he’ll be indicted. It doesn’t take that long to look at the video to do research, an investigation to find out what happened was wrong."

The reason the state is investigating the Blake shooting and not the Kenosha Police Department is largely because of Michael Bell, Sr., whose son was shot in the head by a Kenosha police officer in front of his mother and sister.

The shooting from 2004 happened after Michael Bell Jr. pulled up to his house in Kenosha, and an officer followed him after observing his driving. Dash cam footage shows the two men talked and then struggled, with the officer shooting Bell point-blank in the head. The officer said Bell had taken his gun.

Bell, a retired lieutenant colonel in the U.S. Air Force, lobbied state lawmakers to get a law passed that now requires outside agencies to investigate police shootings. At least eight states, including Georgia, California, New York and Illinois, have since passed similar laws.

"You can understand if you are in a police department with 100 officers there is a lot of comradery," Bell said. "If I run into an ex-Air Force person, I typically connect with them right away. And I know it's very similar in law enforcement."

"A lot of times, unfortunately, we have equated race with criminality, or with dangerousness." Stroshine said. "Everyone is vouching for this guy (Sheskey). They are saying he was a good guy. I think you can have those qualities and still have this horrible outcome."