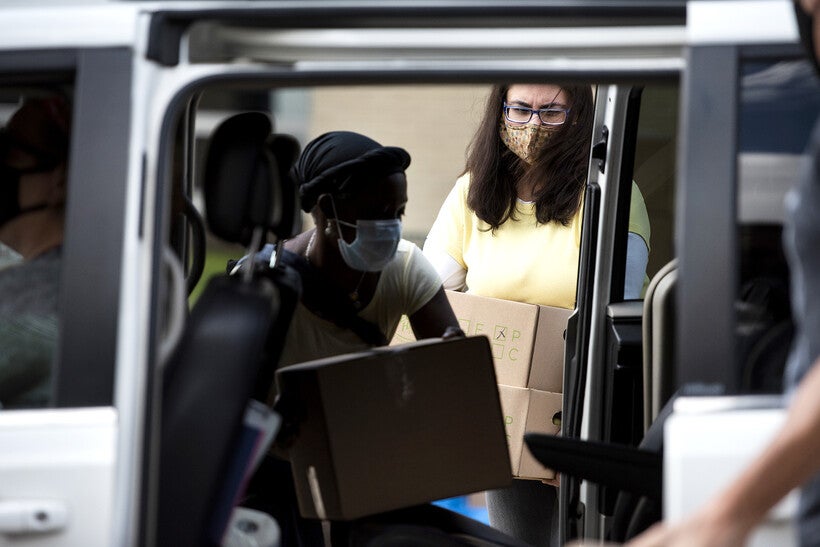 Wisconsin's Food Banks Have Found Their Footing After Early Pandemic Chaos, But It's 'A Marathon That Includes Hurdles'
By Madeline Fox
Share:

The early days of the coronavirus pandemic in Wisconsin were hectic for food banks. In the same way that grocery stores were seeing shortages of toilet paper, flour and other commodities, food banks were seeing disruptions to their own supply lines.

Outbreaks in meatpacking and food processing plants made some things even harder to find. At the same time, most were revamping their volunteer programs and their distribution practices to adhere to social distancing guidelines.

Now, things have stabilized a bit.

"Back in March, we had food shortages. April was looking pretty dire, and then finally by early June we started getting supplies from the USDA," recalled Sherrie Tussler, the executive director of Hunger Task Force in Milwaukee.

"It doesn’t necessarily mean that there’s more donated food out there, but it does mean that usually when we are ordering food, we can generally count on it arriving when they said it was going to arrive," he said.

And, just like for businesses and individual people, the CARES Act brought some relief to the state’s food banks. The Coronavirus Food Assistance Program, or CFAP, helped get some of the food that was no longer needed in restaurants or hotels to local food banks. Private donors also helped the organizations raise money to put toward purchasing food. Tussler said Hunger Task Force has purchased $2.4 million in dairy products from Wisconsin farmers through its Dairy Recovery Program.

That’s also meant this year’s harvest season has looked different from past years. Ordinarily, Second Harvest would get excess produce that farmers harvested for restaurants and farmers’ markets, but both are more limited this year, said Tazelaar.

"Instead of being the leftovers from the farmers markets or what’s left over from the restaurants, we’re the order for them," said Tazelaar. "We’re even getting a little bit more than we normally would from the farmers because of the CARES Act dollars."

Food banks can’t get donations from households, out of safety concerns, and many of the usual fund drives that would typically bring in thousands of cans and non-perishable food are also on hold this year, like a partnership with the Wisconsin State Fair to give discounted entry to people who bring cans, or a food drive run by postal workers.

But with CARES Act funding, financial donations and redirected products from local farms, Tussler said they’re actually in a boom time for food.

"What we’re seeing right now is a wealth unlike anything I’ve seen in my 23 years here," she said. "More food has been available than we have ever seen before."

At the same time, demand for some food banks slightly dipped back down — after an early spike from newly laid off hospitality workers — as CARES Act funding made its way to households through the stimulus check, extra federal unemployment benefits and relief from student loan payments.

"It trailed off for a while because that stimulus money kicked in, then there was the $600, and then on top of that, people that received FoodShare benefits in Wisconsin were getting the maximum benefit. So all of those things combined gave people more economic resources to shop locally as they should," said Donna Ambrose, executive director of The Neighbors’ Place in Wausau. "But now that's gone away, and so now our numbers are slowly ramping up again."

Ambrose, and others, are particularly worried about the school year. Wausau schools, like many others, are starting the year virtually.

"We know that’s going to put a strain on households and families whose kids may rely on those free and reduced meals," said Ambrose. "It’s a juggling act."

Tussler said August is usually the month when Hunger Task Force sees the most demand because summer school, camps and other programs have typically tapered off, and kids are getting all their meals at home again. She’s not sure this August will outdo this year’s unprecedentedly busy March and April, but she said they’ll be watching for higher need — though she points out they've still had a consistently busier year since shutdowns began in March.

"I've been describing it as 'a marathon that includes hurdles,'" she said, laughing.

Hunger Task Force distributed 337,823 pounds of food in February and March, a 37 percent jump over the year before, not including the nearly 9 million pounds of food delivered statewide through the Dairy Recovery Program or the Farm to Families Food Boxes. At the same time, they served 28 percent more people.

The Neighbors’ Place served close to 15,000 people from March to July, up from about 11,000 over the same period in 2019. At the same time, food donations were down from 500,000 pounds to about 426,000 pounds, but they were able to make up the gap thanks to monetary donations and federal assistance.

Second Harvest upped its mobile food pantry routes, which bring food to people who can’t make it to their permanent locations. Tazelaar estimates they’ve added about 17 new "pop up" routes to their typical 28 or so a month, which have either been additional appearances in the same location or the addition of new locations.

He’s a little worried about the same kind of pandemic fatigue that’s gripped Wisconsinites in other aspects of their lives, as some have gotten less careful about social distancing and limiting travel or outings. He said donors and volunteers have been generous with time and money, but it’s hard to keep up the same level of urgency as this turns into a months-long slog.

At the same time, as many businesses have started to reopen, some of their volunteers have had to cut back on hours as they return to work.

"How much longer, how much more can we go back and try to get more support from those folks?" he said. "Even though we know this is not a short-term problem, the increase in need is going to be for many weeks to come. We’re a little bit worried about donor fatigue."