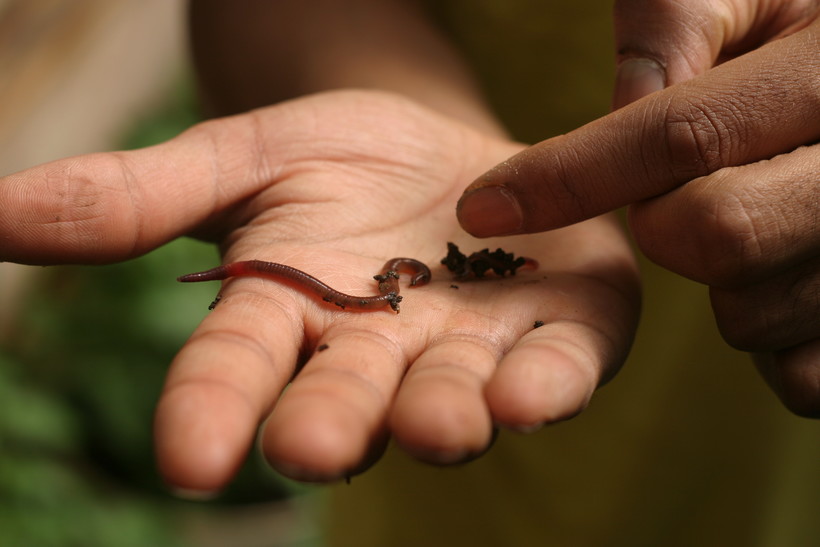 UW-Madison Professor Says There Is Still A Lot To Learn About The Invasive Species
By Brady Carlson
Share:

Every gardener knows having worms in the soil is a good sign, but some Wisconsin gardeners are starting to see an invasive worm that’s harming, not helping, their soil.

It’s called the Asian jumping worm, and, Monica Turner, a University of Wisconsin-Madison professor recently co-authored a study about how it transforms soil in the state.

Turner, the E.P. Odum Professor of Ecology and Vilas Research Professor in UW-Madison’s Department of Zoology, said the worms, true to their name, really do jump.

"They are very active," she said. "They almost seem like worms that want to be snakes."

Q: What else do we know about them, and how they ended up in Wisconsin?

A: The earthworms were first discovered at the University of Wisconsin Arboretum in the fall of 2013, so it's about three years that we've known they were here. They probably came accidentally, in compost or maybe horticultural plants that people were bringing in. They sure didn't come on purpose, and they can hide in the soil as cocoons, because that's how they overwinter.

Q: Traditional worms, the ones we've had here for years, transform the soil and improve it with what are called worm castings. What do Asian jumping worms do differently to the soil and, by extension, what grows in the soil?

A: That's one of the main things we were trying to find out. They go through the leaf litter, and that's not garbage, that's the plant material on the surface of the soil that keeps our soil moist and provides nutrients slowly so that other plants can take those up. What they're doing is transforming those leaves into nutrients that might be available for plants to take up, like nitrogen and phosphorus, the fertilizers that our plants use. But too much of a good thing might not be so good.

Q: You tested in both a forest setting and a prairie, not gardens or agricultural settings. But it doesn't sound like this is a visitor that farmers or gardeners would want to see.

A: We don't think so, because they seem to have a negative effect on the other organisms that live in the soil. We know that they raise the amounts of nitrogen and phosphorus in our soils in ways that might leave them vulnerable to leeching and getting into our water system. We know that phosphorus is a problem in our lakes and nitrates are a problem in our groundwater supply.

But we don't know what they might do to our native plants. Just like in your garden, you put mulch down to keep your plants protected and moist, if we lose that protection, we don't know what'll happen to our native plants. Now in the prairies, that's interesting because these worms are native to grasslands in Asia. We wanted to see, since we live in a state with a lot of prairie in it, whether or not they could thrive in our prairies. And they can.

Q: It sounds like there are multiple questions you have to tackle when studying a relatively new invasive species. You have to figure out how it acts in this new environment, and also find out how the introduction of that invasive species interacts with the other changes that might be going on in that place.

A: Absolutely. There are many, many more questions. This is really just the very first study to start to assess what might happen to our ecosystems with these new invaders present. But we also want to know where they are, even in the Madison and southern Wisconsin area. Where are they, and how many of them are there? They live at very high densities, so they can be quite patchy, but we don't know their distribution well.

We do want to know whether they can get into the agricultural fields, we don't know that. We would like to know how other organisms in the soil might be affected, whether the nutrients that they make available could be lost from our ecosystems or whether other plants will take them up, and, as you mentioned, how this might interact with other changes such as the more intensive rainfall we're seeing. So what happens if more intense rainfall comes at the same time we have more nutrients available to be leeched out of our soils?