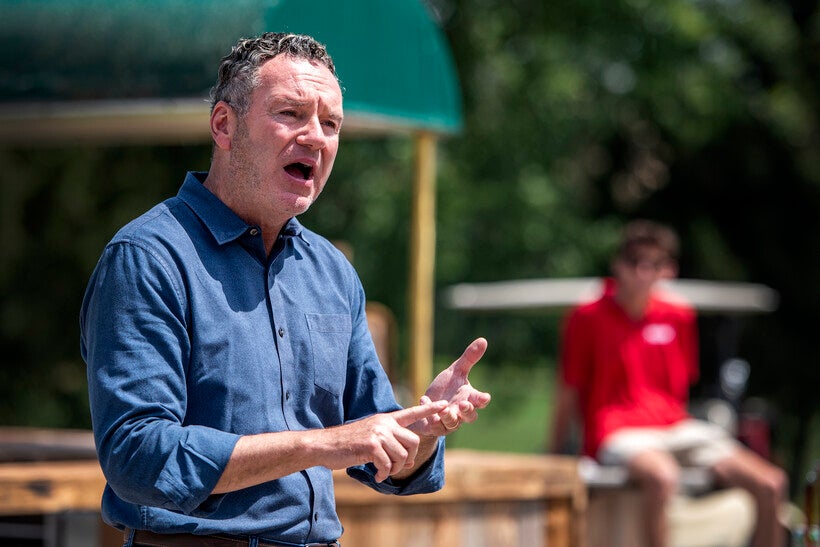 If elected, Tim Michels says he'd consider breaking up the DNR. He wouldn't be the first Wisconsin Republican to try.

A former DNR secretary raised concerns over the cost of the proposal, and the ability to protect the state's air, water, public lands and wildlife
By Danielle Kaeding
Share:

Republican candidate for governor Tim Michels’ proposal to break up the Wisconsin Department of Natural Resources is being welcomed by one former Republican lawmaker who floated a similar idea years ago. At the same time, a former DNR secretary argues splitting up the agency would cost more and provide less service.

Michels is running against Democratic Gov. Tony Evers in the race for Wisconsin’s governor. In their only debate on Oct. 14, Michels said the DNR was "close to being broken." Days later he expanded on those remarks at an event held by the Rotary Club of Milwaukee, saying the DNR needed to be "recalibrated" about who they serve. He said hunters and businesses feel like the agency is "out to get them."

A spokesperson for the Michels campaign did not respond to Wisconsin Public Radio's request for more details on his remarks. Evers spokesperson Britt Cudaback said the governor will oppose efforts to dismantle the DNR if reelected.

"Republicans and their allies have spent the last decade politicizing the DNR and its work, including a recent coordinated effort to obstruct the peaceful transfer of power on the historically apolitical Natural Resources Board," Cudaback said in a statement. "It’s unfortunate but not surprising that Republicans continue to pursue radical policies to the detriment of our state, our water, and our long history of protecting and preserving our state’s natural resources and outdoor areas."

Michels’ proposal is similar to ideas put forward in the past, including one in 2016 by former Republican lawmaker Adam Jarchow of Balsam Lake. Former Republican Congressman Mark Green and former Republican Assembly Speaker John Gard also floated the idea, according to the Milwaukee Journal Sentinel.

George Meyer, who served as a DNR secretary from 1993-2001, said there have been at least four proposals to split up the agency in the past. He said one occurred early on during his tenure at the DNR under former Republican Gov. Lee Dreyfus.

"Each of those efforts have not been finally enacted by the Legislature, and there's been pretty strong public opposition to them for several reasons," Meyer told WPR.

Meyer said some concerns revolved around the close interaction between the health of the state’s air, water and public lands and the health of fish, wildlife and other species. In the past, worries have surfaced that breaking up the agency would limit efforts to effectively prevent pollution and respond to issues like fish kills or runoff from farms and cities.

In 2017, five former DNR secretaries, including Meyer, laid out their opposition to splitting up the agency in a letter to former Republican Gov. Scott Walker regarding Jarchow’s proposal, which suggested breaking the DNR into several agencies. The proposal included two primary agencies responsible for hunting and fishing and another devoted to environmental protection and pollution control.

"One of the things that people in northern Wisconsin know whether you're a sportsman or a business owner, or a farmer is that the Department of Natural Resources is totally out of control and lawless," Jarchow said.

On the business side, the former lawmaker pointed to a lawsuit brought by Wisconsin Manufacturers and Commerce that challenged the DNR’s creation of an interim policy to clean up harmful forever chemicals known as PFAS. A Waukesha County judge ruled the agency must first list PFAS as hazardous substances through the state’s rulemaking process before requiring businesses to clean up contamination. That decision is currently under review by a Wisconsin appeals court.

Jarchow also highlighted the agency’s decision not to pursue a wolf hunt last year until a Jefferson County judge ordered the DNR to hold a season. A federal judge's ruling restored protections for gray wolves across most of the nation earlier this year.

"The department doesn't care. They do whatever the bureaucrats in Madison want to do and whatever they feel like doing regardless of what the law says," Jarchow said.

A Legislative Fiscal Bureau analysis found Jarchow’s proposal would have had no initial costs, but could result in future expenses by reclassifying positions.

Meyer and other secretaries had argued such a move would require more funding to pay for executive salaries and other positions. Even so, Jarchow noted other states have two separate agencies, including Michigan, Minnesota and Illinois.

Meyer told WPR that Michigan split up its DNR into two agencies in 1995, costing the state $4 million.

"It's going to add additional cost and complexity to the agency," Meyer said. "You end up spending more money to get less service."

Mark LaBarbera, executive director of the nonpartisan Wisconsin Wildlife Federation, said members have plenty of ideas about how to fix management of natural resources statewide.

"But none of them include splitting up the agency and doubling the number of administrators, lawyers, as well as overhead expenses," LaBarbera said. "Instead of spending more money to create two agencies, put that money back in the DNR budget where the legislators previously cut the DNR staff."

During Walker’s tenure, lawmakers eliminated nearly 200 positions from the agency over the span of several budgets.

"They want an agency that is accountable, that's responsive, that's effective and that's efficient, and the only way to do that is to split up the agency the way that Tim Michels has proposed," Jarchow said.

WPR reached out to around half a dozen sporting groups for their thoughts on Michels’ remarks. The Wisconsin Bowhunters Association, Wisconsin Association of Sporting Dogs, Wisconsin Sportsman’s Association and Kansas-based Hunter Nation didn’t return requests for comment.

Rob Bohmann, chair of the Wisconsin Conservation Congress, said the independent advisory group to the DNR hasn’t taken a position on Michels' comments.

Arnold Groehler, president of the Wisconsin Trappers Association, said he would like to see more specifics about Michels’ proposal. He also hoped to see more public input about splitting up the agency if Michels is elected "before enacting something that may have unintended consequences down the road."