A Waukesha County judge has ruled state environmental regulators must go through the state's rulemaking process to list PFAS as hazardous substances before requiring businesses to investigate and cleanup contamination from the toxic forever chemicals.

Wisconsin Manufacturers and Commerce and Oconomowoc-based dry cleaner Leather Rich filed a lawsuit against the Wisconsin Department of Natural Resources, DNR Secretary Preston Cole and the Natural Resources Board in February 2021.

In an oral ruling Tuesday, Waukesha County Circuit Court Judge Michael O. Bohren agreed with the state's largest business group that the DNR should establish a list of hazardous substances through the state’s rulemaking process.

Bohren said the DNR "(pulled) the rug out" from under Leather Rich when it issued an interim policy requiring participants in a voluntary cleanup program to test for PFAS and address contamination before they complete the program. Bohren declared the DNR's policy excessive and invalid.

“When the government ignores the rulemaking process, employers are left in the dark as to what regulations they must follow," Scott Manley, executive vice president of government relations for WMC, said in a statement. "Businesses cannot afford to have that kind of uncertainty, and we do not think it is too much to ask for DNR to simply follow the law as written.” 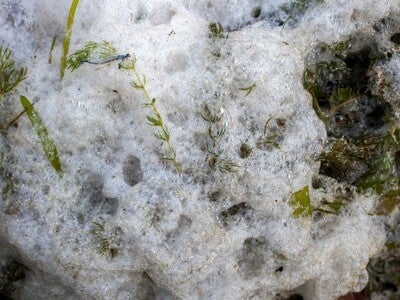 Assistant Attorney General Gabe Johnson-Karp said there has never been and continues to be no need for rules to regulate hazardous substances under the state's spills law. He said the DNR intends to appeal the ruling and file a motion to place the judge's order on hold due to the widespread impacts it could have on the state's regulation of environmental cleanups.

"There is significant concern about the impact that this will have on, for example, properties that are currently in remediation," Johnson-Karp said.

Bohren said he would place a hold on his ruling for 30 days while the court reaches a decision on the DNR's motion to stay the judge’s order.

PFAS, or perfluoroalkyl and polyfluoroalkyl substances, are a class of thousands of synthetic chemicals found in firefighting foam and everyday products like nonstick cookware and stain-resistant clothing.

Multiple studies of people living and working in areas with high PFAS levels have shown links to serious health effects that include increased risk of kidney and testicular cancers, thyroid disease and fertility issues. 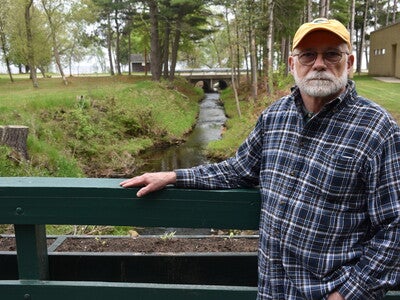 Marinette City Council member Doug Oitzinger stands over a ditch flowing into Green Bay where water samples have shown PFOS levels as high as 2,000 parts per trillion before it's treated.
Danielle Kaeding/WPR

The state's rulemaking process can take years to complete, and Republican lawmakers have also intervened in the process at times to weaken the agency’s rules. Environmental and citizens groups sought to intervene in the case, but a judge denied their request in the fall. They, along with residents of PFAS-polluted communities, say the judge's ruling would remove the DNR’s authority to protect public health and the environment under the spills law if it's allowed to stand.

"While today’s circuit court ruling is disappointing, we expect it to be appealed and are confident that the DNR’s efforts to keep Wisconsin families safe from PFAS contamination will ultimately be vindicated," Rob Lee, staff attorney for Midwest Environmental Advocates, said in a statement.

The ruling comes as the DNR is investigating PFAS contamination at nearly 100 sites in Wisconsin. The chemicals have polluted public and private drinking water wells, forcing some residents to rely on bottled water. Elevated PFAS levels have been detected in drinking water within the towns of Peshtigo and Campbell along with the cities of Marinette, Madison, Eau Claire, Wausau and La Crosse.

Doug Oitzinger, a Marinette City Council member and the city's former mayor, called the ruling a devastating decision that could have widespread impacts for communities facing PFAS pollution statewide. He said the ruling threatens to undermine the agency's work to hold companies accountable for PFAS contamination, including Tyco Fire Products.

Tyco and Johnson Controls have been investigating and cleaning up PFAS pollution stemming from its fire training facility in Marinette since 2017. Wisconsin Attorney General Josh Kaul recently sued Tyco for violating the spills law because the company failed to immediately notify the DNR about the release of chemicals from its site when the contamination was first discovered in 2013. The company has said it believes the contamination was confined to its site.

"If you don't have a rule on this, based on the theory of WMC, they should never have to report it," Oitzinger said. "In the meantime, people were drinking this stuff in some pretty nasty concentrations. We know it's a hazardous material or substance."

The lawsuit ruled on Tuesday is one of two filed by WMC that challenges the agency’s authority to regulate PFAS. A Jefferson County judge ruled in January that the DNR can test for PFAS as part of a separate case about wastewater sampling, but the agency can’t pursue enforcement until standards are in place.

In February, the Natural Resources Board approved the DNR’s recommended standards for surface water and weakened the drinking water standard for two of the most common chemicals: PFOA and PFOS. The board failed to pass PFAS standards in groundwater. Those standards still need to be approved by the Republican-controlled Legislature and Democratic Gov. Tony Evers.