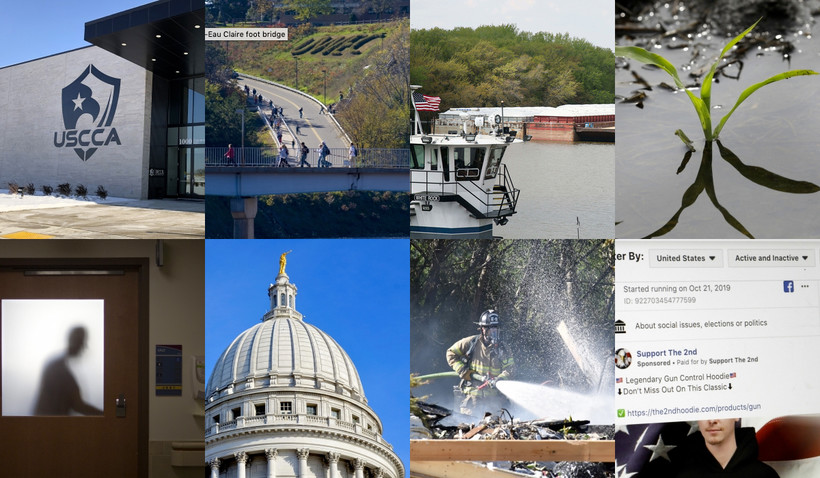 Here's What You Missed In Wisconsin News Over The Holidays

Catch Up On Stories About Politics, Health Care, Ag And More
By WPR Staff
Share:

While some of us were off for the holidays or simply not checking in with current events, the news in Wisconsin didn't stop.

Here's a look at some of the stories you may have missed during the days around Christmas and New Year's.

The United States Concealed Carry Association, a group based in West Bend, hopes to continue its growth by attracting NRA members with its message of responsible gun ownership and family protection. Tim and Tonnie Schmidt started the USCCA in their West Bend home 17 years ago by first publishing a self-defense magazine. Today, the USCCA employs about 300 people and has more than 300,000 members.

A proposed $100 million, 244,000-square-foot sports and events complex in Eau Claire will have to be redesigned after a major funding partner pulled out of the project. The Sonnentag Event and Recreation Complex project has been in the works since 2014 after the University of Wisconsin-Eau Claire Foundation announced a $10 million gift of riverfront property from alumni.

The UW-Eau Claire Foundation, Mayo Clinic Health System and Eau Claire YMCA were founding partners in the complex proposal, but this month it was announced the YMCA was pulling out over concerns "that significant capital debt could put the long-term fiscal well-being of the YMCA at risk to deliver on their mission."

Despite losing potentially $20 million in funding, supporters still say ground will be broken this summer.

There was a major decline in shipping and increased maintenance needs after water levels on the Mississippi River remained high for most of 2019, according to the U.S. Army Corps of Engineers. More than 20 trillion gallons of water had flowed through Lock and Dam 10 in Guttenberg, Iowa, as of November, setting a new record high. The 50-year average for the lock is 12.4 trillion gallons.

The conditions caused a significant decline in the amount of commodities shipped. According to the Corps, 77 million tons of commodities were shipped on the river before the season ended on Thanksgiving. That's 25 percent lower than the 10-year average.

A record-setting amount of precipitation and below normal temperatures caused delays for farmers throughout 2019. The annual Crop Progress Review for 2019 shows corn and soybean harvests in Wisconsin were three weeks behind the five-year average, coming in as the second slowest harvest pace in the past 40 years of records, according to the U.S. Department of Agriculture. In Wisconsin, the late harvest lead to the tilling of fields happening at the slowest pace in 40 years.

There are striking health gaps between rural and urban America. According to recent data from the Centers for Disease Control and Prevention, people in sparsely populated areas are more likely to die from cancer, heart disease, chronic lower respiratory disease, stroke and unintentional injuries.

In Wisconsin, about 1.5 million people — roughly a third of the state's population — live in rural areas. Finding ways to improve health outcomes for those people is an ongoing effort among health experts.

"When you look across these deaths you see this pattern of higher risk behaviors in rural communities and also less access to primary health care," said Pat Remington, emeritus professor at the University of Wisconsin School of Medicine and Public Health.

Wisconsin's election board remains deadlocked on how to handle a court order that says the state must purge more than 200,000 names from Wisconsin's voter registration list.

The Wisconsin Elections Commission, which is split evenly between Republicans and Democrats, met Monday to address the matter but failed to come to an agreement.

The case involves records of voters who may have moved and was initiated by a conservative legal group. The state Department of Justice has appealed the order to purge the names.

Some Wisconsin fire departments are no longer using firefighting foam that contains PFAS — a group of man-made chemicals that have been linked to increased cholesterol and cancer risk, among other health hazards. The Madison Fire Department switched to PFAS-free foam in mid-December. Firefighters in Fond Du Lac have also stopped using foam with the chemicals.

A nonpartisan group based in La Crosse is hoping to help voters elect ethical political leaders in the next election through a new 2020 Citizens Guide.

LeaderEthics-Wisconsin, the nonprofit group behind the guide, defines ethical leaders as truthful, transparent with public information, unifiers rather than dividers, and willing to represent their entire constituency.

"Those four principles, they're pretty rock solid if you were a senior leader in health care or education or business or the service industry," said Lee Rasch, the group's executive director. "It's the irony that that's true in all of those other occupations except the political arena. And so we have to get people to think 'why would we accept that and why can’t we raise that bar?'"