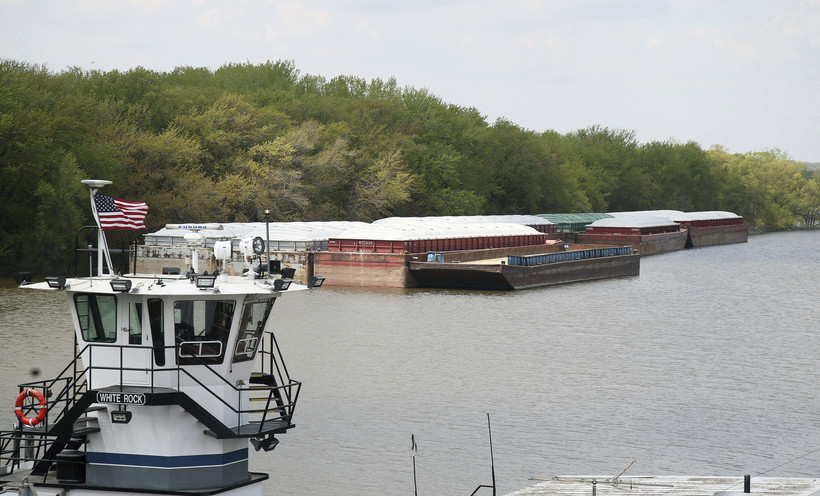 A record-breaking amount of water on the Mississippi River caused major shipping delays and increased maintenance needs in 2019.

More than 20 trillion gallons of water had flowed through Lock and Dam 10 in Guttenberg, Iowa, as of November, setting a new record high.

"The 2019 navigation was one for the record books, to say the least," Moes said. "We kind of went from late ice to high spring flooding. And that flooding, that high volume of water just kind of sustained itself through mid-summer."

"There was need to remove more but rather than dredging the full channel width, we elected to narrow the channel in certain areas just to ensure that we were able to continue to keep navigation flowing," Moes said. "As we were removing material from one area, we were trying to also identify other areas of need and kind of leapfrogging up and down the river the entire season."

Moes said the district sent two of its dredges south to St. Louis, Missouri, and Vicksburg, Mississippi, to help with more severe flooding and dredging needs. Floods in Illinois and Iowa effectively shut down navigation on the Upper Mississippi River for several weeks this spring.

The challenging conditions caused a significant decline in the amount of commodities shipped.

According to the Corps, 77 million tons of commodities were shipped on the river before the season ended on Thanksgiving. That's 25 percent lower than the 10-year average.

Doug Hosszu is president of the Upper Mississippi Waterway Association, a shipping industry trade group. He said sustained high waters this season were "unprecedented" and forced many ships to tow fewer barges.

"You go often times from 12- to 15-barge tow down to a 9-barge tow, so you really lose efficiencies and increase transportation times for people getting their commodities to market," Hosszu said.

He said the water level also made some docks inaccessible, adding more logistical challenges for shipping companies and the industries, like construction and agriculture, that rely on them.

"We’ve had floods certainly in the past and high water, that's not uncommon. But it's usually two, three weeks and it's business as usual. That just really was never the case this year," Hosszu said.

Hosszu said there’s no indication that next year’s season will be as challenging. But he is concerned flooding events like the one this spring may becoming more common.

"We certainly seem to be having more high water events in general, which is concerning," Hosszu said. "The more high water, the more silting, the more dredging required. And there's a cost for that and there's shipping delays involved with that."

Moes said the Corps will be continuing to track the volume of water on the river and take into consideration how this year’s condition impacted navigation as it plans for the future.