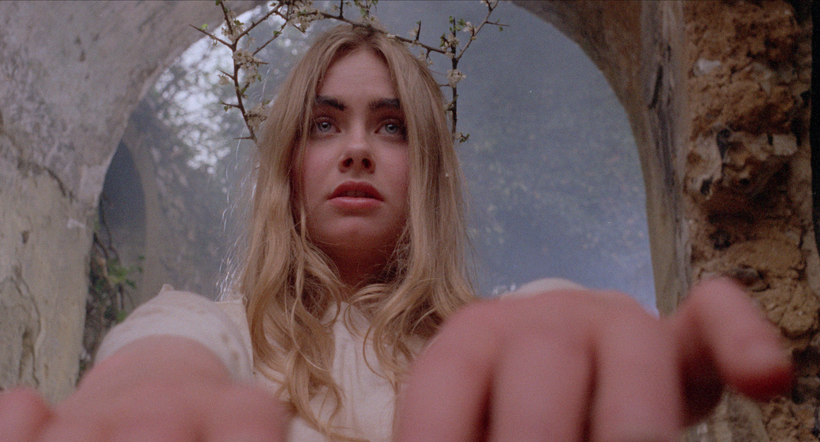 Still from "The Blood on Satan's Claw," the 1971 folk horror film directed by Piers Haggard. Photo courtesy of Severin Films

The haunted history of folk horror: Filmmaker Kier-La Janisse on the growing subgenre

What comes to your mind when you think of folk horror? Maybe that time Bob Dylan pulled out an electric guitar at the Newport Folk Festival in 1965? Well, that’s not the kind of folk horror we’ll be talking about here. We’re talking about a subgenre of the horror film.

It's a genre that author and critic Kier-La Janisse made an expansive documentary called "Woodlands Dark and Days Bewitched: A History of Folk Horror." The film explores the history of folk horror from the 1960s to the present day. It features more than 50 interviewees and touches on over 200 films.

Janisse joined WPR's "BETA" from the festival circuit in Spain to talk about the growing subgenre and how to define it.

"I think the basic definition you could use would be to say a horror film that takes place almost always in a rural environment that deals to some degree with folk customs, practices or beliefs," Janisse said. "And that often features small, isolated communities. And often there is a clash of belief systems that will happen between insiders and outsiders from those communities."

In "Witchfinder General," Vincent Price portrays a witch hunter named Matthew Hopkins, based on an actual historical figure. The film takes place in 1645 during the English Civil War and finds Hopkins traveling around the English countryside collecting money from various villages to eliminate people accused of witchcraft.

"The Blood on Satan's Claw" takes place in England during the early 1700s. A farmer discovers a deformed skull buried in a field and the skull has a kind of demonic power over the young people in the village.

"All the schoolchildren start to become affected," Janisse explained, "and that film is very focused on the youth revolt and what happens when this community of kids stops following the rules."

The third film in the unholy trinity is "The Wicker Man," and what Janisse says is probably the most well-known of the folk horror films.

It's about a police sergeant who travels to an island off the coast of Scotland named Summerisle to investigate the case of a missing young girl. The island is home to an isolated pagan community. Lord Summerisle (Christopher Lee) is the leader of the islanders who worship their ancestors' pagan gods.

While all three of these films are very different, Janisse says people look at "the tendrils of folk horror kind of stemming from those films in some way."

"There's probably more British folk horror than from anywhere else," she added, explaining that the British tend to be very nostalgic about the history of their homeland so folk horror is a kind of film they tend to gravitate toward.

"If you think about Australia or America, for instance, our history is very upsetting and it's dealing with genocide and slavery and things that are living issues," Janisse explained. "These things have not gone away. When we look back on our own history, it's not with this nostalgia. It's something that's met with shame and guilt and a lot of negative feelings."

Janisse said that one of the things that distinguishes American folk horror from the folklore of other countries is the vast size of the United States. As people created settlements throughout the country, regional types of folk horror developed.

"As you start looking at the way that people move to Appalachia and moved out west and moved to the Prairies, you realize that there is actually a lot of American folk art. It doesn't look anything like British folk horror necessarily. People didn't call these films folk horror. But when you think about it, 'Children of the Corn' is absolutely a folk horror film."

One of the most compelling parts of Janisse's documentary occurs during the discussion of the Indian burial ground trope that became very common in 1970s horror films. Jesse Wente is a horror fan and the executive director of Canada's Indigenous Screen Office.

In the film, Wente points out that the Indian burial ground is a piece of fiction created by white settlers.

"So many of the horror films that deal with the Indian burial ground are about people building their houses on an Indian burial ground," Janisse said. "What Jesse talks about is this idea that the threat of thinking about the Indigenous people that have been displaced by colonization, the threat of that for the settlers is that they have to face the fact that they have displaced people and that that can happen to them as well."

Janisse said it was chilling when Wente said it, but it became even more chilling when the documentary premiered at the Fantasia International Film Festival in Montreal, Quebec in July 2021. The festival screening occurred around the same time that the bodies of over 1,000 Indigenous children were being discovered at the former sites of residential schools all across Canada.

"Bodies of kids that were forcibly taken from their communities and put into residential schools with the aim of assimilating them into white culture by punishing them if they use their own language, not allowing them regular communication with their families in their communities," Janisse elaborated. "And so many communities were just broken up and displaced and disconnected from each other. People have often talked about it as just creating that disconnection was an act of genocide in its own. It's something that definitely creates the kind of anxiety that's going to show up in horror films like this."

Janisse said one of the reasons for the resurgence in folk horror films is that there are definite similarities between the 1970s and our present era, as Howard David Ingham points out in the film.

She continued, "I think that there was more of a desperation about it in the 70s. They're like 'I need something to be a support system for me because the world is collapsing around me and I don't know what to do.' And I feel like we're going through a lot of that now. And COVID has definitely exacerbated that and increased that curiosity for people that feel like there is a reemergence of interest in folk culture and that the folk horror films are just part of that."