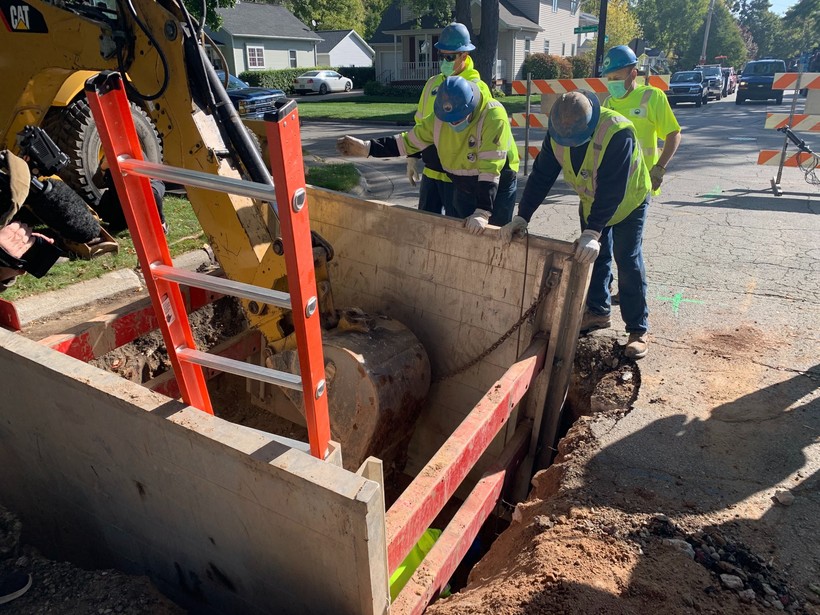 Crews replace a lead service line on Emilie Street in Green Bay, Wis, on Tuesday, Oct. 6, 2020. It was the last one in the city, officials said. Megan Hart/WPR

Green Bay officials gathered Tuesday on Emilie Street to celebrate the completion of the city’s five-year effort to remove more than 2,000 lead pipes.

The multimillion-dollar work wrapped up at the home of Deb Weaver, who moved to Green Bay six years ago. The fact that officials had the foresight to invest in replacing the city's lead pipes shows why it's a great place to live, she said.

"We have access to city amenities, yet it feels like a small town, and in small towns people genuinely care about one another," she said.

In all, Green Bay Water Utility replaced 1,781 utility-owned and 247 privately-owned lead service lines. Homeowners paid nothing out-of-pocket, according to the nonprofit utility. There are no known lead pipes left in Green Bay.

"It's really a great example of what we can do when we identify a problem, but also allocate the resources that are necessary to really address it," said Green Bay Mayor Eric Genrich, who grew up on Emilie Street.

Nancy Quirk, general manager of Green Bay Water Utility, said the journey began years ago when tests showed the water in some homes was contaminated with lead.

"Instead of making excuses or kicking the can down the road, our utility chose to quite literally dig deeper to get to where we are today," she said.

Around the time the water crisis in Flint, Michigan, made national headlines, Green Bay Water Utility committed to removing all lead service lines by the end of 2020.

Quirk said the project encompassed three parts: find the lead pipes, replace them and pay for it.

The utility worked with the city's Department of Public Works to replace water mains at the same time crews repaved roads, making it cheaper. They worked through rain, heat, sleet and snow, she said.

"I am so happy and proud today of what this utility has accomplished," she said.

Financing the work was a collaborative effort. Rates increases, Safe Drinking Water Loans from the state Department of Natural Resources and funds from the Lambeau Field tax — originally established to help pay for renovations at the stadium — all contributed, Quirk said.

David Ross, assistant administrator at the EPA, said he’ll share Green Bay as a model as other cities address their lead service lines.

Green Bay joins Madison in having retired all its lead service lines. Milwaukee has more than 70,000 lead lines, but officials have said funding is a barrier to replacing them.

Lead exposure can cause health problems, especially in children.