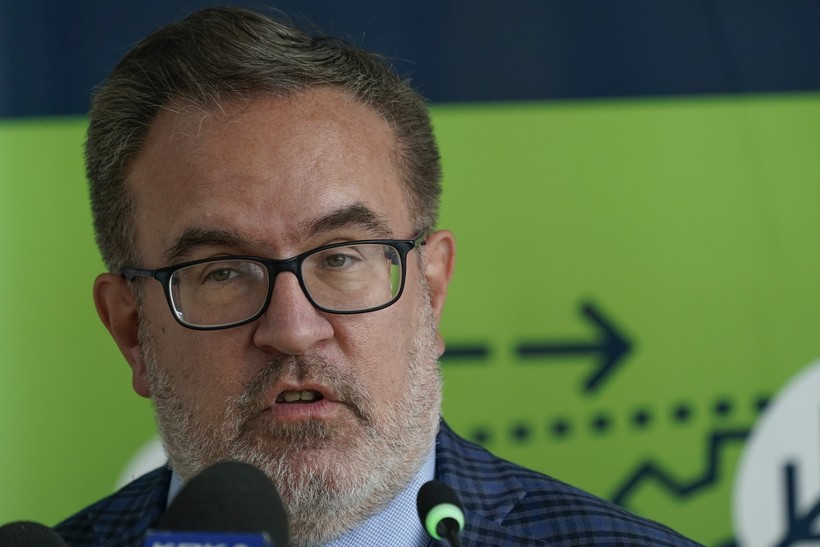 Andrew Wheeler, the EPA Administrator, speaks about the rollback of the 2016 methane emissions rules to undo Obama-era rules designed to limit greenhouse gas emissions from oil and gas fields and pipelines at the Energy Innovation Center Thursday, Aug. 13, 2020, in Pittsburgh. Keith Srakocic/AP Photo

A proposed overhaul of the U.S. Environmental Protection Agency's lead and copper rule could become finalized within weeks, although critics say it doesn't go far enough to keep lead out of drinking water.

U.S. Environmental Protection Agency Administrator Andrew Wheeler touted the proposed changes, and the Trump administration's record on the environment, in Michigan on Wednesday. The EPA administrator was there in part to announce $95 million to help with upgrades to the state's water infrastructure, which became a focal point for the nation's lead issues following the Flint water crisis in 2014.

The existing lead and copper rule has been in place since 1991 to keep drinking water safe from lead, which is harmful to the nervous system and linked to developmental issues in children. The proposed revisions would require water sampling at schools and day care centers, and require water systems to map all their lead service lines.

"This way, we're ensuring the worst contaminated pipes aren't the last miles replaced, because it goes without saying that everyone, regardless of their zip code, deserves the safe drinking water," said Wheeler.

Yet, Wheeler acknowledged there's no timeframe for completing that inventory, noting some states and cities may be further along than others.

Wisconsin water utilities have already identified more than 176,000 lead service lines that are publicly owned, along with more than 148,000 private lead lines.

The proposed revisions to the lead and copper rule don't go far enough to address lead in drinking water, according to Carly Michiels, government affairs director for Clean Wisconsin.

"We know that there is no safe level of lead in drinking water, yet they're allowing it to go up to 15 parts per billion, which is just unacceptable," said Michiels.

That threshold marks the existing action level at which water systems are currently required to take action to minimize lead levels. The new rule would also set a warning level of 10 part per billion for water systems, which would trigger them to study corrosion or require them to optimize their water treatment. The environmental group said in comments to the EPA that threshold is too high.

Wheeler and President Donald Trump have boasted about the administration's work on air and water pollution over the last four years, even as the agency has worked to roll back 100 environmental regulations. Trump claimed in Tuesday night's presidential debate against Democratic challenger and former vice president Joe Biden that he wants "crystal clean water and air," adding that he hasn't destroyed business in pursuit of that goal.

A report released last year gave the state a failing grade for not preventing lead in school drinking water. Nearly 4,000 children in Wisconsin had elevated blood lead levels in 2018, according to the Wisconsin Department of Health Services. Children can be exposed to lead through lead-based paint, water pipes and other lead-based products, according to the Centers for Disease Control and Prevention.

Gov. Tony Evers proposed borrowing $40 million to replace lead lines under the current budget. The proposal drew criticism from Republican lawmakers, who said it would be too expensive. GOP lawmakers backed local efforts to address issues or install water filtration systems, as well as legislation that allowed utilities to provide financial assistance to customers to replace water lines.

Madison was the first major utility in the nation to replace around 8,000 known public and private lead service lines, according to Wisconsin Watch. The removal of lines cost roughly $19 million and took nearly a decade to complete.

Milwaukee has more than 70,000 lead service lines that need to be replaced, which could cost the city up to $756 million. Milwaukee Water Works Superintendent Karen Dettmer told WPR's "The Morning Show" that funding is the main issue with addressing lead lines.

The Wisconsin Department of Natural Resources receives funding from the EPA to offer financial assistance to communities through its Safe Drinking Water Loan Program. The agency is also providing around $63 million to communities for private lead service line replacements.

Wisconsin utilities are further along in identifying lines that need to be replaced, according to Denise Schmidt, administrator of the water utility regulation and analysis division for the Public Service Commission. The commission began requiring utilities to track customers' lead service lines several years ago.

"Our utilities have been working sooner at developing these inventories," said Schmidt. "It's hard work."

The American Water Works Association supports the rule's requirements for utilities to develop inventories, but it opposes revisions that would require them to test for lead in drinking water at schools and daycare centers. Angel Gebeau acknowledged that mapping lead lines is easier said than done. The chair of the Wisconsin section of the national association noted some homeowners don't want to know if lead lines exist because they fear it will reduce the value of their home, declining both sampling and inspections.

Nancy Quirk, general manager of the Green Bay Water Utility, said they had to work harder with some property owners to get their lead service lines replaced. But, she said they've replaced all but one of the 1,780 lead lines owned by the utility and 247 lead lines owned by customers. The utility spent about $6 million and accessed around $1 million from the state's Safe Drinking Water Loan Program to pay for the replacements.

Quirk thinks rule revisions requiring mapping of lead lines is important for utilities to understand what they're facing.

"I think, in bigger utilities, you just got to start. It's going to take a while to find all the information," said Quirk.

The lead and copper rule revisions would also give utilities even more time — about another 20 years — to replace lead service lines once they've been identified, which critics say exposes another generation of children to contaminated drinking water.

"You can't wait until kids are poisoned to replace the lead line," said Michiels.

Editor's note: An earlier version of this story said lead-based paint is the most common source of lead poisoning. The story was updated to include multiple pathways for lead exposure on Oct. 1, 2020, at 2:35 p.m.