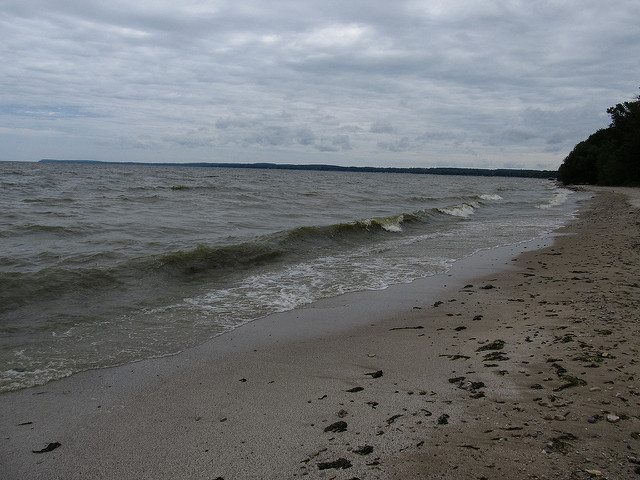 A study by a University of Wisconsin-Milwaukee researcher shows dead zones are a persistent problem in the bay of Green Bay.

The zones affect deep waters and can decrease or eliminate oxygen levels potentially harming fish and other wildlife.

J. Val Klump is the dean of UW-Milwaukee's School of Freshwater Sciences. He and other researchers have been measuring oxygen levels at the bottom of the bay, and recently published their findings in the Journal of Great Lakes Research.

Their research — conducted by lowering monitors into the water — has found what scientists call hypoxia, or a deficiency in the amount of oxygen. Hypoxia sets in when oxygen levels fall at or below two milligrams per liter.

Klump said surface waters usually have upwards of nine milligrams of oxygen per liter. He explained that the bay of Green Bay's relative shallowness — an average of just 30 feet — makes it more susceptible to dead zones because hypoxic water is normally found at the bottom of bodies of water where oxygen is less prevalent.

"As surface water warms up and the bottom water will stay cool and warm water is less dense so it floats on top of that cold water." In effect, he said "it puts a cap on the bottom water so it can’t re-oxygenate because it does not re-contact with the atmosphere."

Klump said it's hard to tell if the problem has gotten worse over the years because there is a lack of long-term research — aside from a single monitor put in by the city of Green Bay in 1986 near the mouth of the Fox River.

"If you look at what that bottom sensor says, it looks as if in the last decade or so the number of times that sensor detects hypoxic water has increased," Klump said.

Dead zones can have a negative affect on healthy lake ecosystems, including deterring species like lake flies, a main source of food for fish, Klump said. And in 2005, thousands of gobies washed up on the eastern shore of the bay due to low oxygen.

"This hypoxic blob was pushed right up onto the beach then you would see, presumably, a lot of dead fish." But Klump added that to the naked eye, "No one would notice it if it was a particularly good or a particularly bad year."

Dead zones are fed by nutrient runoff from farms or cities when the nutrients sink to the bottom of bodies of water and suck up all the oxygen.

Klump and his team will continue taking water samples from the bottom of the bay throughout this summer.