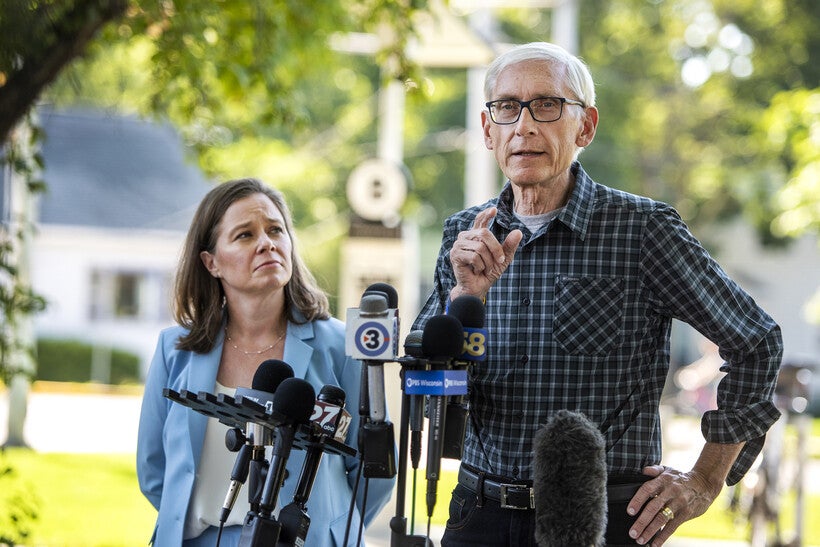 Gov. Tony Evers speaks to reporters with Sara Rodriguez, a member of the state Assembly and Democratic candidate for lieutenant governor, on Wednesday, Aug. 10, 2022, in Madison, Wis. Angela Major/WPR

Evers made an appearance at a Milwaukee Press Club event Tuesday
By Evan Casey
Share:

Gov. Tony Evers said increasing shared revenue for municipalities across the state would be a top priority for him if he wins his reelection bid this November.

Speaking at a Milwaukee Press Club event Tuesday, Evers said he wants to "reset" the state's relationship with cities and counties.

"We have to increase shared revenue. Simple as that. That will be my top priority," Evers said. "There's only so much they (municipalities) can do without money."

Shared revenue, which is the largest state aid program for local municipalities, has been cut for several years. Combined with state revenue limits, the decline is leading officials in Milwaukee to make tough budget cuts and pushing municipalities across the state to go to referendum asking voters for more funds to pay for services. A 2021 op-ed from the mayors of Madison and Brookfield said shared revenue has been cut incrementally by $94 million since 2003.

Milwaukee Mayor Cavalier Johnson also said the city could have received an additional $155 million dollars for its 2023 budget if shared revenue had kept up with inflation.

Evers said Tuesday he wants to increase shared revenue by 10 percent in the next two years, if reelected.

"That's going to be a significant, significant increase, considering they (municipalities) got zero percent over the years prior to that," Evers said.

Evers added that increasing shared revenue will also help address crime in places like Milwaukee, where homicides are on pace to set another record this year.

Evers' opponent Tim Michels has said he plans to increase state funding so police departments can hire more police officers. Michels' "Back the Blueprint" plan calls for a 50 percent increase in police offices in the state's most "dangerous neighborhoods" in one year.

Evers also used his visit to Milwaukee to reiterate his support for access to legal abortion. He said he wouldn't sign an abortion ban bill that created exceptions for sexual assault and incest. Evers' comments come weeks after Michels said that he would sign such a bill if elected governor.

"No, I wouldn't sign it because that leaves the underlying law in place, which is a ban on abortion here," Evers said Tuesday.

Access to legal abortion has been in sharp focus for voters since the Dobbs decision overturning Roe v. Wade. That decision means an 1849 abortion ban has gone into effect across Wisconsin.

Michels recently changed his stance on the issue after he said the 1849 abortion ban was an "exact mirror" of his position.

In recent months, Evers has attempted to safeguard abortion rights across the state.

The Milwaukee visit comes days before the candidates are set to debate each other for the first and only time.

A recent CBS News Poll found Evers and Michels were tied in the gubernatorial race. That poll found the economy, inflation and crime were the top three issues for voters in Wisconsin this year.