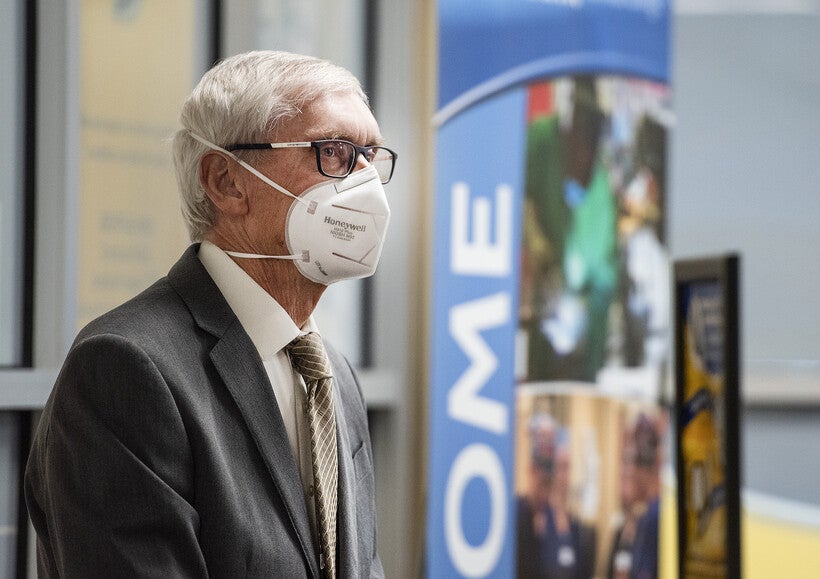 As the omicron variant continues to drive COVID-19 case numbers higher in Wisconsin, Gov. Tony Evers is focusing on ways federal support can help the state cope with the latest virus surge.

Evers' powers to respond directly to the pandemic through emergency declarations and statewide orders, including things like mask mandates and capacity limits at businesses, were sharply curbed by Wisconsin Supreme Court decisions earlier this year.

"I'd love to be able to think through what we could do that might be around mitigation, but the fact of the matter is, Republicans and the state Supreme Court have limited that," Evers said in an interview with WPR.

So, instead of mandates and state health orders, Evers said he will enter 2022 with a focus on how best to allocate billions of dollars in federal COVID-19 aid around the state, as well as getting support from the federal government for things like hospital and care facility worker shortages.

Wisconsin received $2.5 billion in coronavirus aid from the federal government in March. That's on top of more than $3 billion from federal aid packages in 2020. The governor has the authority to decide how the vast majority of those funds are spent.

According to the Legislature's nonpartisan budget office, Evers had already allocated roughly $1.64 billion of the latest federal funding as of mid-December. That leaves roughly $890 million left to spend.

Evers said he will continue to focus on economic development as he doles out the money, but also noted he plans to reserve some funds — which must be allocated by the end of 2024 and spent by the end of 2026 — for public health measures, including supplying testing and personal protective equipment to local governments and health care facilities.

"What we have to guard against, though, is having all that federal money spent down," Evers said. "Because we don't know what's going to happen in the future. We have to make sure that we have adequate public health money to help out our colleagues at the county level ... and also our hospitals."

In response to an ongoing shortage of workers in hospitals and nursing homes across the state, the governor said he will continue to reach out to the federal government to supply workers. He said that is the "primary" way to address the problem as Wisconsin's pool of health care workers seems fully tapped.

"I don't know of any nurses or nursing assistants that are not working right now (in the state)," he said.

Evers said state responses could include "moving people around the state" or deploying the Wisconsin National Guard to assist health care facilities, but noted President Joe Biden has begun to deploy federal military doctors and support staff to sites across the country, including Wisconsin. The Federal Emergency Management Agency announced earlier this month that it would send a team of 20 U.S. Navy medical providers to Bellin Hospital in Green Bay.

"They have a fairly robust group of people they’ll be able to send across the country," Evers said. "So we’re hopeful that will continue to be an answer for us."

As the state moves toward the height of the 2022 election cycle, Evers also said he will continue to oppose Republican-backed changes to election laws in Wisconsin.

The Republican-controlled Legislature approved several bills earlier this year in response to GOP criticism of the 2020 election, including measures that would have limited absentee voting. Evers vetoed all of them.

"I will do whatever I can personally, as governor, to make sure that people that are eligible to vote can vote," he said. "I have a veto pen, I'll use it. I'll use it every chance I get."

The governor has also been sharply critical of Republican-backed investigations of the 2020 election, including an ongoing effort led by former conservative state Supreme Court Justice Michael Gableman. He argues the efforts are a waste of taxpayer money and perpetuate unsubstantiated concerns about election administration.

Amid the Gableman investigation and in the wake of an audit by the Legislature's nonpartisan audit bureau, Republican state lawmakers have called for changes to the bipartisan Wisconsin Elections Commission. Evers said he wouldn't support any such changes.

"We have a good system," he said. "We look forward to keeping that in place."

The investigations and calls came after Wisconsin completed a series of routine state election audits and a presidential recount in the state’s two largest counties. None of the reviews have uncovered widespread fraud or wrongdoing. There were also numerous Republican-backed lawsuits in the state, all of which have failed to result in findings of wrongdoing by election officials or voters.