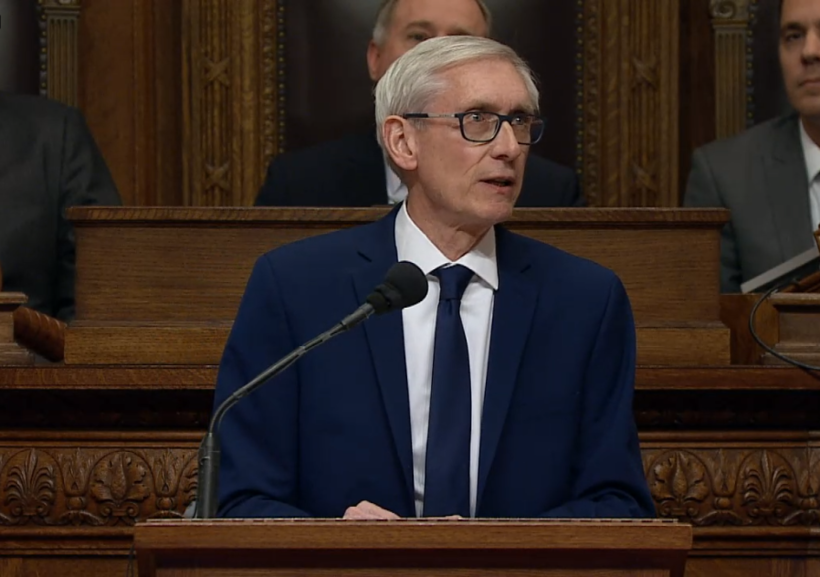 Proposal Would Hike Gas Tax By 8 Cents Per Gallon
By Shawn Johnson and Laurel White
Share:

Wisconsin's gas tax would go up by 8 cents per gallon, state government would pick up a bigger share of school funding than it has in more than a decade and Medicaid would be expanded to an estimated 82,000 residents under the state budget proposal unveiled Thursday by Democratic Gov. Tony Evers.

Evers' $83.4 billion, two-year spending plan would also index the gas tax to allow for automatic increases in the future, legalize medical marijuana, restore government funding to Planned Parenthood and take power away from state legislators to draw their own district lines.

He would pay for the changes in a variety of ways, including by collecting hundreds of millions more from manufacturers and capital gains than the state does right now.

Those ideas and others in Evers' first budget as governor provide the clearest signs yet that state government is markedly different today than it was in the eight years when it was run by former Republican Gov. Scott Walker.

"At the end of the day, our budget is about putting people first," Evers said.

At the same time, the governor faces the sobering reality that many of his priorities, both large and small, are likely dead on arrival in the Republican-controlled state Legislature.

Evers has spent the past several weeks rolling out pieces of his budget, but the transportation funding plan he introduced Thursday was new.

It would also bring back automatic gas tax indexing, a law that was initiated in 1985, then repealed 20 years later by Republican lawmakers and Democratic Gov. Jim Doyle.

Under indexing, the state's gas tax goes up automatically to keep up with inflation. Wisconsin's gas tax hasn't gone up since indexing went away in 2006.

Evers would also increase a registration fee for heavy trucks by 27 percent.

All told, the Evers administration said changes would increase transportation funding by more than $600 million over the two-year budget.

A major portion of that funding would be used to reduce new transportation borrowing in the budget to just $338 million, which the Evers' administration contends would be the lowest level in two decades.

It would also help finish construction on Milwaukee's Zoo Interchange project, which was put on hold in Walker's last budget. In addition, Evers would pay for the expansion of Interstate 43 from two lanes to three in Milwaukee and Ozaukee counties.

While members of both parties have said they're open to new forms of revenue to pay for roads, it remains to be seen whether they'll embrace Evers' proposal. Legislators haven't taken a vote to increase the gas tax in more than two decades.

Another cornerstone of Evers' budget would increase state spending on K-12 education by roughly $1.4 billion, including a $606 million infusion for special education.

The change would mean state government would return to the days when it funded two-thirds of the cost of public education, a benchmark initiated by former Republican Gov. Tommy Thompson in 1997 that was repealed by Doyle and was never restored under Walker.

While some Republicans have said they support two-thirds funding in principle, GOP leaders have questioned whether the state could realistically support the pledge under Evers.

Evers would increase the amount schools are allowed to increase property taxes by roughly $200 per pupil in each year of the budget. Low-revenue school districts would get additional funds.

When it comes to higher education, Evers pledged a $150 million increase for the University of Wisconsin System, which would be the UW's largest state funding increase in more than a decade. Part of that would be used to offset the lost revenue from continuing a tuition freeze for in-state undergraduate students.

But beyond school funding, Evers education budget includes some political lighting rods. It would offer in-state tuition to immigrants living in the country illegally, and it would cap enrollment for Wisconsin's private school voucher program.

The governor would also completely phase out a voucher scholarship for special needs children and eliminate a tax credit for private school tuition.

Evers also revealed for the first time another major source of funding that would pay for his budget, calling for limits on a tax break for investors.

Right now, people who hold capital gains for more than a year don't have to pay the full state tax on the income.

Evers would require higher-income investors to pay the same tax rate on their capital gains as they pay for regular wages and salaries. That change is expected to generate about $505 million for state government over two years.

Evers would also scale back tax credit for manufacturers that earn more than $300,000, generating another $516 million for the state.

Those two sources of revenue would more than offset a new $832 million tax cut Evers wants for individuals who earn below $80,000 and families that earn below $125,000. They'd receive a 10 percent tax credit under the governor's budget. Evers would also expand Wisconsin's Earned Income Tax Credit.

Republicans To Craft Their Own Budget

The GOP reaction to Evers' budget was scathing and swift.

"This is a budget that's based on somebody who's spent too much time in Madison," said Assembly Speaker Robin Vos, R-Rochester, at a GOP press conference after the speech ended. "They have spent time in a liberal bubble, thinking this is what the people of Wisconsin want. It isn't."

Vos and other Republican leaders said major tenets of Evers' budget were unacceptable, and would never pass the Legislature.

"To me, it's a thousand-page press release, not a budget," said Sen. Majority Leader Scott Fitzgerald, R-Juneau. "A lot of the items that the governor ticked off I think were kind of the greatest hits of the Democrat party."

Fitzgerald said there was little room for Republicans to find common ground with the governor given this budget as a starting point.

"There's kind of complete disregard for the Republican-controlled Legislature," Fitzgerald said. "Because sitting there I'm just thinking in my mind a number of members who are clearly going to reject everything in this document just full out."

Fitzgerald said Republicans would set Evers' proposal aside and build their own budget.

"I don't think we have a choice," Fitzgerald said.

The governor has rolled out several budget proposals in recent weeks. Those include plans to legalize of medical marijuana, return of state funding to Planned Parenthood, and remove a deadline for closure of the state’s embattled youth prison.

But Evers also proposed a wide range of other changes Thursday that would effectively erase major policies of the Walker administration.

All of the plans would need approval by Republican lawmakers.

Some of the highlights would: