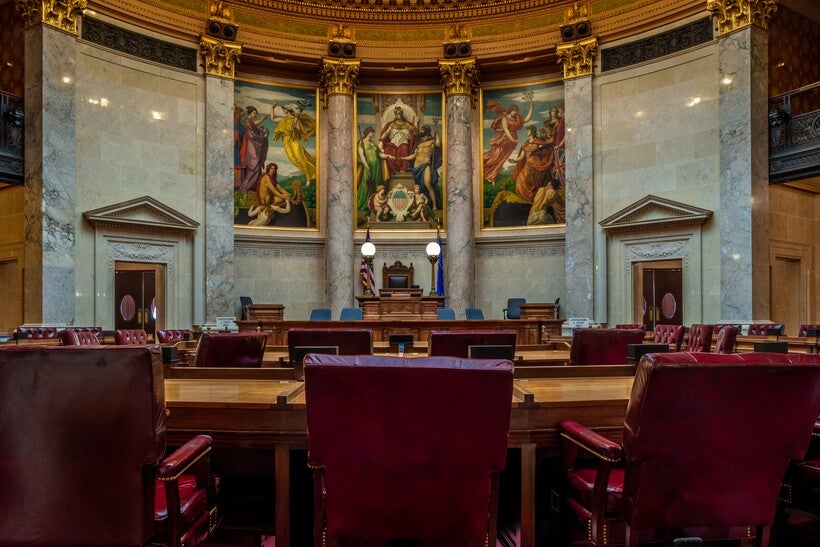 Republicans in both houses of the state Legislature passed a GOP-backed tax cut Thursday over the objections of Democratic Gov. Tony Evers, but the governor has yet to say definitively whether he will sign or veto the plan.

State senators convened at 7:30 a.m. to pass the proposal on a party-line vote after Democrats in that chamber blocked a final vote on the plan Wednesday. The state Assembly passed it later Thursday morning with two Democrats, state Rep. Nick Milroy, D-South Range, and Rep. Steve Doyle, D-Onalaska, joining all Republicans to support it.

The bill is one of several Assembly lawmakers are taking up Thursday, which they've said will be the final Assembly session day of the year.

The GOP bill would spend down a projected surplus in Wisconsin's budget brought about by an estimated $818 million increase in tax collections.

Evers has said he wants to use the surplus money on school funding, introducing a bill earlier this month that would spend roughly $250 million on schools, with $130 million of that aimed at reducing property taxes through the state's school aid formula. The governor's plan would also restore the state's commitment to funding two-thirds of the cost of education.

During brief remarks in the Senate before Republicans cut off debate Thursday morning, state Sen. Tim Carpenter, D-Milwaukee, said Republicans were only passing their tax cut to force Evers to veto it.

"In my opinion, what is happening here is just a bogus plan put forward to make sure the governor has to veto something," Carpenter said. "I think he has every right to."

Senate Majority Leader Fitzgerald, R-Juneau, said Wednesday that he'd talked to Evers about the tax cut, and that Evers said he would consider signing it.

But Britt Cudaback, Evers' deputy communications director, suggested on Twitter there was more to the story.

"The governor told @SenFitzgerald he’ll be as open to Republicans’ tax bill as Republicans have been about passing his education plan," Cudaback tweeted.

Fitzgerald told reporters Thursday that Cudabeck wasn't in the room for his discussion with Evers, and that he stood by his description of his meeting with the governor.

"I specifically asked the governor if he would consider it, and he said, 'Yes, I will, I'll take a look at it,'" Fitzgerald told reporters. "I mean, it was genuine."

Fitzgerald said that Evers' chief of staff, Maggie Gau, asked him about education funding at the meeting. Fitzgerald told reporters that Republicans wouldn't pass Evers' school funding plan because they'd been talking for months about different versions of tax cuts before arriving at the bill the Legislature passed Thursday.

"To bring K-12 into that discussion right now at the end of session and say, 'OK we're going to allocate X amount of dollars towards K-12 and still have enough revenue left to do a significant tax cut,' it just doesn't seem feasible right now to try to make that happen," Fitzgerald said.

Evers' office didn't immediately respond to a request for comment after the tax cut passed the full Legislature.

But in his own tweet Wednesday, the governor expressed concern with the GOP plan.

"I know there are Republicans concerned about the high price tag of their own unsustainable tax bill that shortchanges our rainy day fund," Evers wrote. "My plan invests in our kids and property tax relief. There’s still time to do the right thing."

If Evers does veto the tax cut bill, Fitzgerald indicated that the money would likely remain in the state budget until next year.

"I don't see anything happening until the next state budget," Fitzgerald said. "So maybe that's when the deal gets cut."