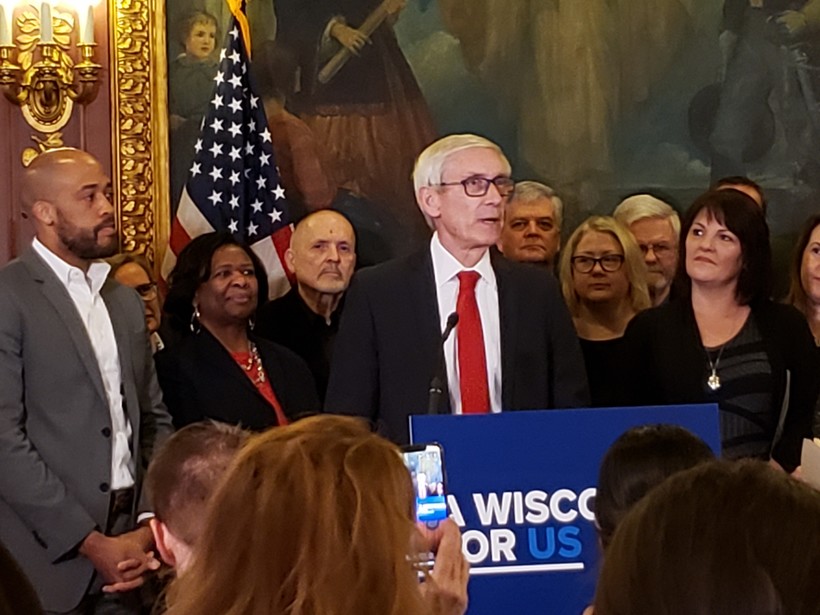 Gov. Tony Evers announced Thursday that he wants the Legislature to use a projected budget surplus to increase state spending on schools by $250 million, with an emphasis on special education and mental health funding.

Evers called a special session to deal with the plan, which he said would restore the state's commitment to funding two-thirds of the cost of public education, a benchmark first established in the mid-1990s but abandoned during repeated budget crunches more than a decade ago.

"Folks, getting back to two-thirds funding is not a new or controversial topic," Evers said at a news conference from his state Capitol conference room. "I am hopeful that this proposal will not only invest in our kids and our state's future, but that it will also start reducing the reliance on property taxes and referenda and it will receive broad bipartisan support, and I look forward to working across the aisle to get things done."

The projected state surplus, and how to spend it, is likely to dominate discussions at the Capitol during the remaining few weeks of 2020 that state lawmakers plan to be in Madison.

The Legislature's nonpartisan budget office released new revenue projections in January showing that state government would collect $818 million more in tax revenue than previously expected. After an automatic deposit into the state's rainy day fund, that would leave the state with a balance of about $705 million at the end of the current two-year budget cycle. That's about $450 million more than was originally projected.

Republicans said immediately after the surplus was announced that they wanted to use the money for some type of tax cut, but Evers said Thursday that spending more state money on schools could accomplish both of their goals.

"That reinvestment will help districts get out from undergoing to referendum every two years and continuing that spiral of borrowing money and also frankly having to go back to the community," Evers said. "We needed help around the issue of rising property taxes. We get that. Investing in our schools will do that."

Evers' special session on education will begin officially on Feb. 11, but the executive order signed by the governor can't force the Legislature to vote on his plan.

Given the immediate response by Senate Majority Leader Scott Fitzgerald, R-Juneau, it seemed unlikely that Evers' plan would pass the Senate, at least in its current form.

"Senate Republicans have been focused since late last year on using our surplus for a tax cut for hard-working families, and the governor knows that," Fitzgerald tweeted. "I don’t see us budging off that position. It appears that the teachers' unions are the ones calling all the shots in the East Wing."

Assembly Speaker Robin Vos, R-Rochester, also said that increasing state spending was something Evers and Democrats "know we won't do."

"I just met with Governor Evers yesterday and there was no mention of this special session," Vos tweeted. "The governor may say he wants to work together but it appears he’s only interested in scoring political points."

Evers' plan would spend $79.1 million on special education and another $4.5 million on "high cost" special ed.

The $130 million set aside for equalization aid would return the state to its two-thirds funding benchmark, which Evers noted Republicans had repeatedly said they supported.

For example, in a letter to Evers dated Jan. 10, 2019, members of the Assembly Republican caucus listed it as one of their top priorities.

"We look forward to working with you to meet the historic two-thirds funding threshold set as a goal for the next state budget," the GOP lawmakers wrote.

In addition to the special session on education funding, Evers has also called a special session on agriculture. While that proposal was greeted more warmly by GOP lawmakers, Vos has said that Republicans will go "bigger and bolder" than the governor when it comes to helping farmers.