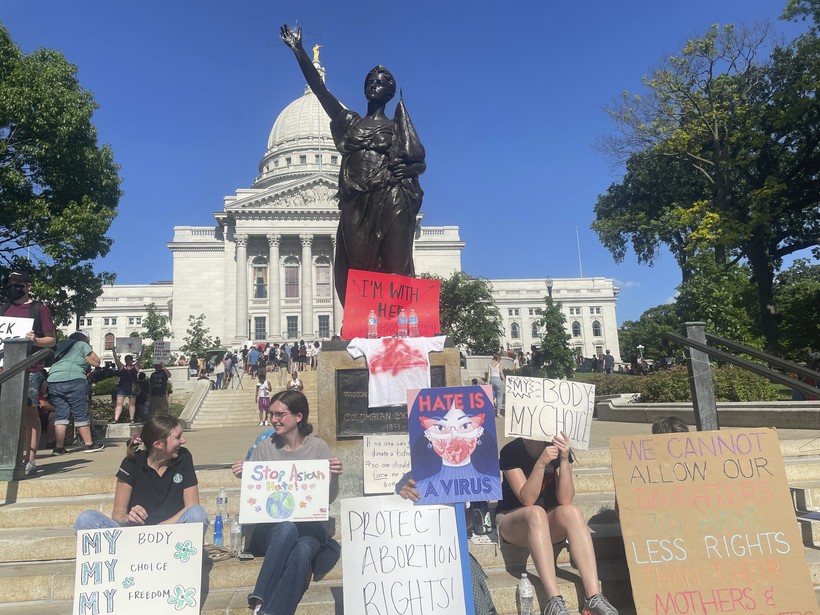 Protesters gather outside the state Capitol building in Madison, Wis., Friday, June 24, 2022. Earlier that day the U.S. Supreme Court stripped away women’s constitutional protections for abortion. The court’s overturning of the landmark court ruling in Roe v. Wade is likely to lead to abortion bans in roughly half the states, including Wisconsin. Harm Venhuizen/AP Photo

Lawmakers say there's no threat of prosecution under the challenged laws
By Danielle Kaeding
Share:

Republican leaders in the Wisconsin Legislature want a judge to throw out a lawsuit filed by Democratic Attorney General Josh Kaul that challenged the state’s 173-year-old abortion ban.

The collapse of the landmark ruling put Wisconsin’s 19th century abortion ban back into effect. The state adopted laws in 1849 and 1858 that banned physicians from performing abortions unless the woman’s life is at risk.

"We're trying to get clarity about what the law is, and ultimately a ruling that that 19th century ban does not come back into effect just because Roe was overturned," Kaul told Wisconsin Public Radio on Tuesday. "There were laws that were passed, subsequent to Roe, that we've argued are fundamentally inconsistent with that ban."

That includes a 1985 law that allowed abortions before a fetus could survive outside the womb. Kaul has said the state's abortion ban could be invalidated because it hasn’t been used since Roe v. Wade took effect.

In the motion filed Monday, Republican leaders argue the ban is still in effect, saying there’s no legal basis to render it obsolete based on lack of use. They also say Kaul, the Wisconsin Department of Safety and Professional Services, the Wisconsin Medical Examining Board and former Democratic State Rep. Sheldon Wasserman lack legal standing to bring a case because they’re not private citizens who could be affected by the ban.

"Plaintiffs are public officials and agencies — not individuals or entities who could be accused of violating the State’s abortion laws," attorneys for lawmakers argued in a brief supporting the motion to dismiss.

They also contend individual lawmakers, including Republican leaders, don’t have a duty to enforce the state’s abortion statutes. They argued Kaul and others have provided no credible threat of prosecution under the challenged laws.

"Without review of real-world application and enforcement (if any), the parties and the Court would be left to argue about 'abstract disagreements,'" the brief states.

"If that case is dismissed, it would mean that the ban remains on the statute books," said Kaul. "They've raised a few different arguments for why they believe it should be dismissed. But we will be responding to those arguments in our briefing. We look forward to moving forward with this case and having it heard by the courts."

Evers tried to repeal the state's abortion ban prior to the ruling by the U.S. Supreme Court that invalidated Roe v. Wade. But Republican lawmakers took no action during the special session.

Editor's note: The Associated Press contributed reporting for this story.