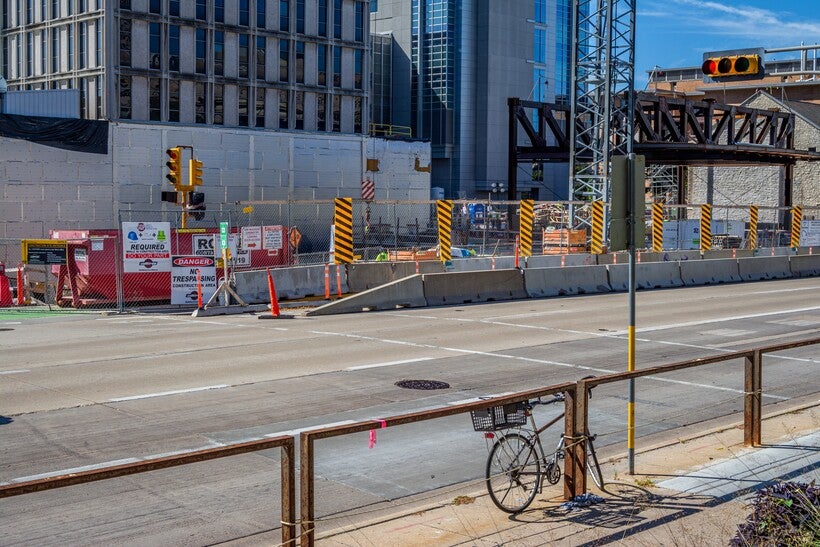 A building under construction along University Ave. on the University of Wisconsin-Madison campus. Bill Martens/WPR

The plan passed the committee on a party-line vote of 11-4, with Republicans voting in favor and Democrats against.

The UW System projects included in Evers’ $1 billion plan included $117 million for a new Science and Technology Innovation Center at UW-River Falls, $96 million to replace Albertson Hall at the UW-Stevens Point, and $94 million on the Cofrin Technology and Education Center at the UW-Green Bay.

All of those projects are funded under the Republican-approved plan.

The GOP plan did not fund the project.

"Investing in the capital needs of our University of Wisconsin System statewide touches every corner of our state," he said. "Building projects are more than brick and steel and concrete, they are an identity for the campus, they change the feel, they change the experience of college kids when they walk on to campus."

After the vote, UW System President Tommy Thompson called the approved Republican plan a "significant step forward for our campuses."

"We appreciate the committee’s investment in maintenance and repair funding for our current facilities, and in moving forward critical projects throughout the UW System," Thompson said in a prepared statement. "These are much needed investments that will ensure our students have the important educational opportunities they need to graduate and enter the workforce."

Outside of the UW System, Evers’ plan would have also spent $66 million to expand the juvenile treatment center at the Mendota Mental Health Institute in Madison and $46 million on a Milwaukee County juvenile corrections facility. Both facilities are part of a plan to replace the Lincoln Hills School for Boys and Copper Lake School for Girls, which have faced allegations and lawsuits related to inmate neglect and abuse and have been slated for closure for years.

Republicans voted to approve the $66 million Mendota Mental Health Institute expansion last month, but on Tuesday bypassed the $46 million for the Milwaukee facility, instead approving only $4 million for project planning.

Goyke, who has been a key figure in juvenile justice law changes over the past several years, argued delaying the Milwaukee facility will delay the closure of Lincoln Hills and Copper Lake.

"I don’t understand what the majority party can’t understand about how to finally take us across the goal line and modernize our juvenile justice system," he said. "The delay in closing Lincoln Hills is squarely on the shoulders of the Republican legislative leaders."

The governor’s proposal also called for $164 million for a new state office building in Milwaukee and $4 million on planning for a new office building in Madison to replace the "GEF 1" building that currently houses the state Department of Workforce Development. Neither of those projects were funded in the Republican-approved budget plan.

Republicans have raised concerns about paying for new state office buildings when the future of in-person work and office space needs are uncertain because of work changes during the COVID-19 pandemic.

Both of the budget committee-approved capital budgets under Evers are substantially larger than any capital budget passed during the eight years of former Republican Gov. Scott Walker's administration.

The capital spending plan will be considered by the full Legislature when the body takes up the entire 2021-2023 state budget. The deadline for the budget is June 30, but lawmakers and the governor could go beyond that date. If they do, the current state budget will remain in effect to fund programs.