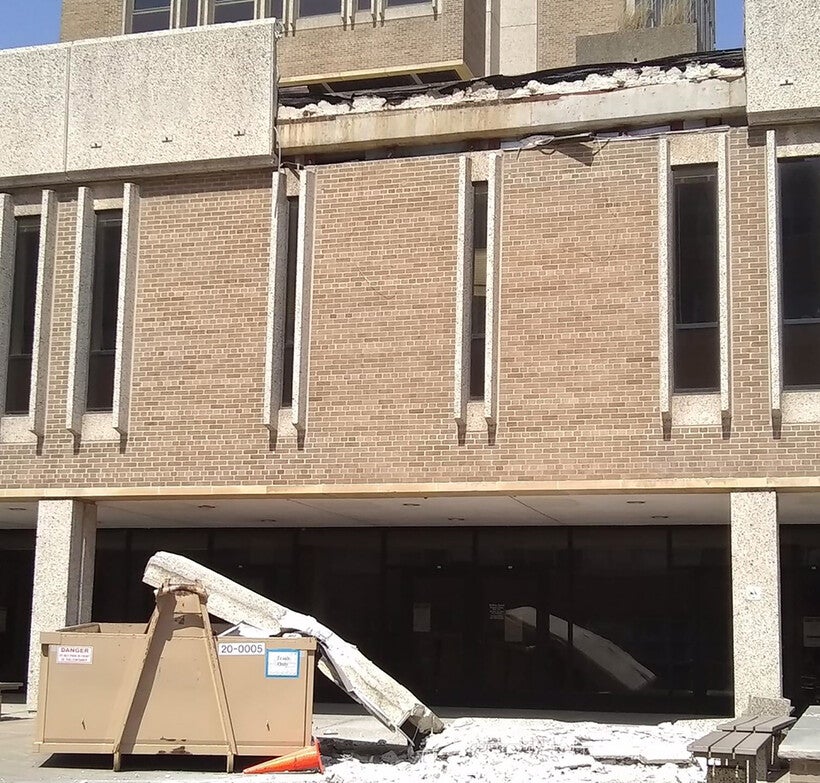 A large concrete slab that was part of the facade on Van Hise Hall fell on Sunday, April 4, 2021, on the UW-Madison campus. No one was injured. Photo courtesy of Laura Guse

A large slab of concrete fell off an aging building at the University of Wisconsin-Madison over the weekend, smashing steps away from an entrance to the highly-trafficked academic and administration hub. The incident highlights a major challenge for state universities across Wisconsin: how to balance limited budget resources with a growing number of buildings that have fallen into disrepair.

The concrete facade fell off Van Hise Hall on Sunday afternoon. No injuries were reported, according to the school. Van Hise Hall is a 54-year-old building that houses the UW System administration offices and several UW-Madison academic departments. It also hosts UW System Board of Regents meetings. At 19 stories tall, it is the second tallest building in Madison, after the state Capitol building.

In the university’s 2005 master plan, Van Hise Hall was slated for demolition sometime "over the next 20 years," along with several facilities deemed "inefficient and obsolete 1960s and 1970s era buildings." However, the latest master plan, released in 2015, pushed Van Hise’s demolition to 2035 — or later.

Gary Brown, director of Campus Planning and Landscape Architecture at UW-Madison, confirmed Monday there is "no defined timeline" for replacing the building.

"We will continue to maintain/upgrade this facility until it is removed to assure it is safe for use by our faculty, staff and students," Brown said via email. 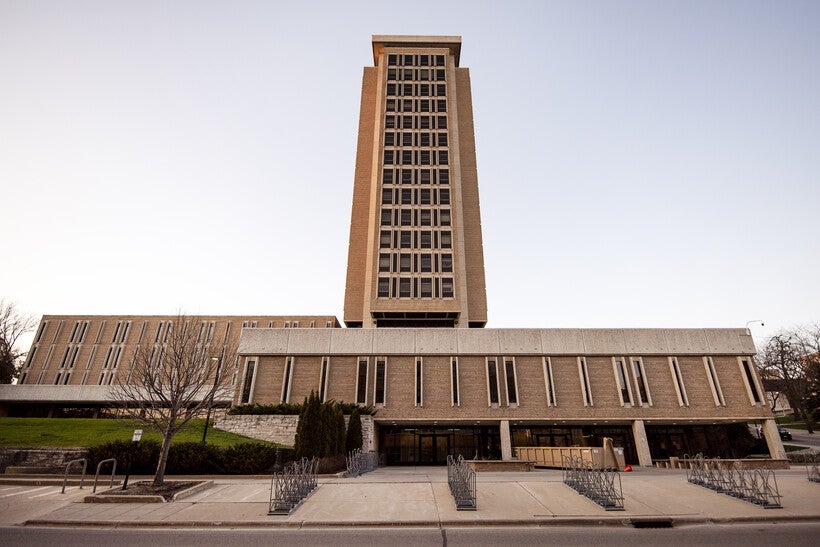 Gov. Tony Evers’ latest, roughly $2.4 billion capital budget proposal, which outlines spending on construction projects across the state, includes about $1 billion for the UW System. System administrators say those funds are sorely needed, as numerous buildings are in states of disrepair similar to Van Hise.

"Van Hise Hall has exterior envelopes not unlike other buildings throughout UW System that are aging and in disrepair," the System said in a tweet Monday. "It’s why over 83% of our capital budget is for renovation and replacement. Van Hise Hall is not even on our short list, but Albertson Hall (@UWSP) and Cofrin Library (@UWGB) face similar exterior issues and improving them is critical."

"More than half of the UW System’s buildings were built in the 1950s, 60s, and 70s, and many now require significant renovation work to ensure continued safety as well as to support continued excellence in teaching, learning, and research," Thompson said in a prepared statement.

According to the UW System, many of the aging buildings are "overdue for HVAC, electrical, and plumbing repairs as well as exterior repairs, renovation, and replacement."

Last month, Republicans on the state Building Commission rejected Evers’ 2021-23 capital budget plan. Projects outlined in the plan include $100 million for a new engineering building on the UW-Madison campus, which would replace a building built in 1938.

However, the Building Commission's rejection may not spell the end for those projects. The body, which is made up of an equal number of state lawmakers from both parties, also failed to approve the governor's entire $2.5 billion capital budget two years ago, but GOP lawmakers went on to approve a $1.7 billion capital budget months later, with $1 billion for UW System projects.

State budget negotiations are expected to ramp up over the next few months. The budget is scheduled to be finalized by July 1, but debate on the spending plan could go past that date.