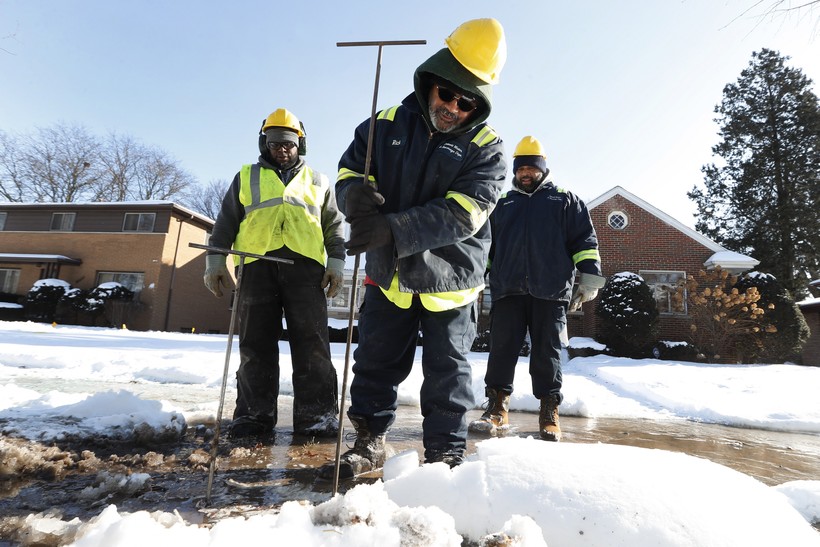 The extreme temperature swings in the past few weeks put pressure on Wisconsin's infrastructure. In Madison, it raised concerns about how water mains will fare as climate change progresses.

The Madison Water Utility responded to 32 water main breaks in one week, from Jan. 28 to Feb. 4, during the polar vortex and rapid thaw. In a single day, Feb. 1, the city experienced seven breaks.

The last time that Madison saw such an influx of main breaks, Barrilleaux said, was during the 2014 polar vortex.

"I think so," said Barrilleaux. "I think this winter is a really interesting example. In early January, there was no frost line in the ground. Last week, it was 4 feet into the ground. That's a huge shift."

Some of Madison’s water mains are more than 100 years old, installed in the 1880s when the utility formed, but those aren’t the most troublesome pipes.

The mains most susceptible to breaks were installed in the post-World War II era. They’re made from a less expensive and less durable material: spun-cast iron. A dependable main should last about 100 years, but Barrilleaux said that in Madison and across the country, the baby boom water mains are breaking down after 70 years.

Where in Madison are these vulnerable pipes?

"In all the parts, except for the isthmus," Barrilleaux said. "We have main breaks on the west side, the east side, the north side, the south side. Everywhere that we have to be able to respond to."

A typical repair can take anywhere from two to six hours and often involves putting a metal sleeve over the broken area. More severe repairs might require digging up stretches of road.

"It's only so much that pipes under the ground can take," Barrilleaux said. "And this winter in particular has been really eye-opening in terms of the swings that we're seeing and that maybe we'll continue to see for some time."

Madison, like many cities, has been working on replacing its aging water infrastructure. Barrilleaux said the Madison Water Utility has replaced 100 deteriorated mains over the past 10 years, and it will take three more decades to replace the remaining 300 miles.

She said they can’t speed the process up.

"First of all, those replacements are paid for by the people who pay their water bills," Barrilleaux said.

One mile of water main costs $1.5 million to replace.

It also requires tearing up streets, which causes disruption to traffic and residents.

The utility tries to pair water main and street replacements together, as in the case of the months-long Monroe Street construction on the city's west side.

The main replacement program is both long-range and never-ending, Barrilleaux said.

"Thirty years from now, we’re going to have pipes in the ground that need to be replaced that are just fine right now," Barrilleaux said. "So it's an unending process of renewing and sustaining Madison's critical water infrastructure."

In the meantime, the Madison Water Utility will have to respond to breaks as they occur.

"When it gets to be 6 feet under the ground and frost line moving different depths in different parts of the city and there’s different ages of water main and different kinds of pressure, it is just anybody's guess where we're going to see the next main break and how severe it's going to be," Barrilleaux said.