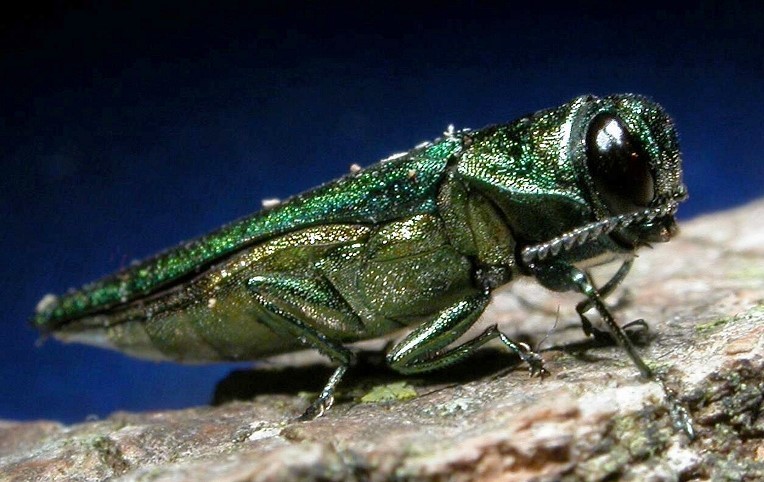 The emerald ash borer has killed tens of millions of ash trees in the U.S. Photo courtesy of David Cappaert, forestryimages.org

Extreme Cold May Have Chilling Effect On Emerald Ash Borer

Dangerously cold temperatures in Wisconsin and much of the Upper Midwest have been keeping people out of school, away from work or cooped up inside. But the extreme cold might also have a chilling effect on the invasive emerald ash borer.

The Asian beetle that originates from China has killed tens of millions of ash trees across the country. The invasive pest was first discovered in Wisconsin in 2008, which has since spread to more than half the counties in the state.

However, a recent study in Minnesota found frigid cold temperatures around 20 degrees below zero can cut their numbers in half, according to Rob Venette, the study’s co-author and a research biologist with the U.S. Forest Service.

"When it gets to minus 30, then we're looking at about 90 percent mortality," said Venette.

Venette noted the cold pertains only to air temperatures as the insects aren't as vulnerable as people to dangerously cold wind chills. The bark of the tree provides a bit of insulation to the invasive pests so they’re not directly exposed.

Venette said he and other researchers studied ash borer larvae in the lab and in the field to measure how much cold it takes to kill them during the last polar vortex in 2014. At that time, they recorded up to 70 percent mortality when temperatures reach 23 degrees below zero.

"Because it's been so much colder this go around, we’re expecting much more mortality," he said.

Venette and Andrea Diss-Torrance with the Wisconsin Department of Natural Resources said this week's extreme cold will likely kill up to 80 percent of the invasive pests.

Diss-Torrance, invasive forest pests program coordinator for the DNR, said the cold could buy landowners time to treat ash trees that haven't been infested with an injectable insecticide to prevent the disease from spreading.

"Or even kill it out if the infestation has just started and the population in that tree is still pretty low," she said.

Either way, the cold will likely mean their numbers will spread much more slowly and un-infested trees stand a better chance of remaining that way for another year.

"The challenge, of course, is that they’re going to be a few insects that survive this extreme cold and they’ll help to re-establish some of those populations," said Venette. "Within a year or two, unless it’s cold again, we expect those populations to be back where they are about now."

The tree-killing beetle isn't the only invasive insect that may be impacted by the extreme cold. The weather may also affect populations of gypsy moths, Japanese beetles, and the brown marmorated stink bug that have damaged trees, plants and fruit crops.