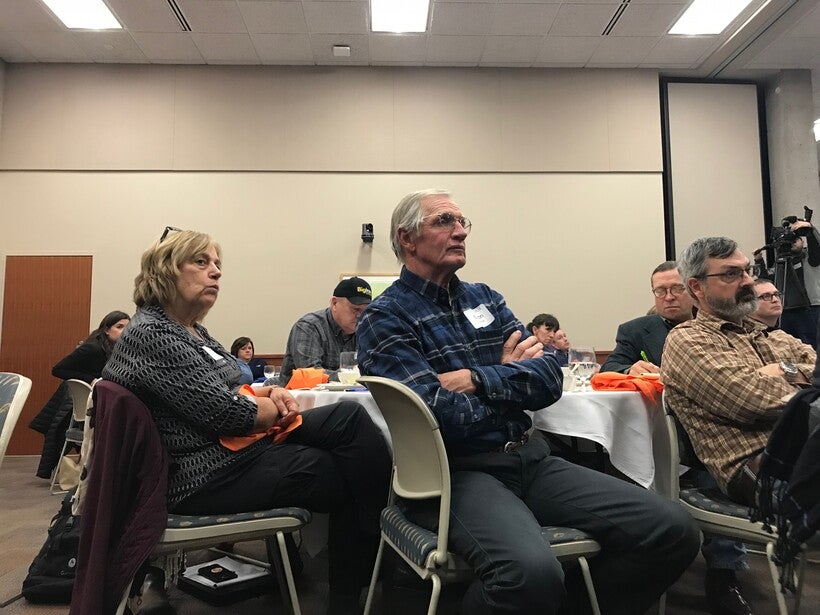 Experts Say There's No Farm Crisis But Plenty Of Challenges

Agriculture in Wisconsin isn't in crisis, but many farmers will be happy to put 2019 behind them.

That's according to a panel of farmers, politicians, state officials and academics who spoke on Thursday at the University of Wisconsin-Platteville. The panel, co-hosted by the news outlet WisBusiness and the University of Wisconsin-Madison's Center for East Asian Studies, discussed how years of low crop prices, lack of governmental support and the more recent trade war with China have limited farm growth or driven farmers out of business.

State Rep. Travis Tranel, R-Cuba City, is a farmer himself. He said most legislators don't know where to begin to solve these problems because they don't know anything about agriculture.

"It is unbelievable," he said. "When our state started, the Legislature was comprised pretty much of farmers and a few attorneys. Now, it's a lot attorneys and, you know, me."

Recently, the Legislature has tried to help farmers cope emotionally with their economic challenges, funding mental health counseling vouchers and proposing a scholarship program to send farmers to business classes.

Tranel said that money "is not gonna do a darn thing."

"Farmers need markets to sell product to at an affordable price so they can pay their bills. Short of that, you're not gonna accomplish anything," Tranel said.

Agriculture is a huge part of Wisconsin's economy, which employs almost 12 percent of all workers in the state, according to the Wisconsin Department of Agriculture, Trade and Consumer Protection.

That means the problems that impact individual farmers hurt the rest of Wisconsin's economy, too, said Paul Mitchell, director of UW-Madison's Renk Agribusiness Institute. He pointed to the farm goods that make their way into Wisconsin's large vegetable processing industry.

"Our raw commodities are touched by a lot more people in the state. They're not shipped to Texas and manufactured into food. A lot of them are manufactured here," he said.

A new report from the Federal Reserve says harvests in large areas of the Midwest — including Wisconsin — will be much smaller this year. Rain delayed planting, and crops might not have enough time to grow before the first hard frost.

"There's a lot of young people, a lot of women who are very interested in going into farming, but finding that opportunity right now makes it almost impossible," she said.