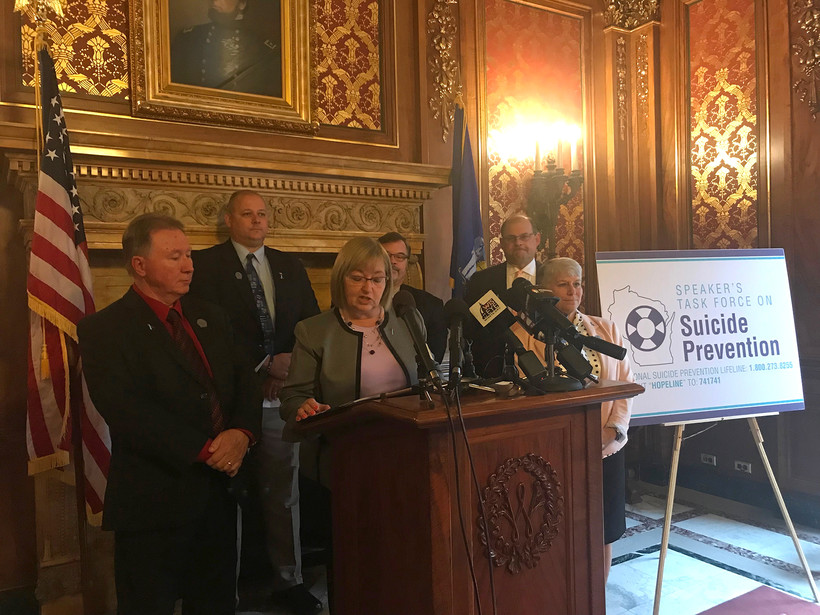 New Series Of Bills Aims To Combat Suicide In Wisconsin

Suicide was the ninth leading cause of death in Wisconsin in 2017, and state lawmakers released a series of proposals Wednesday aimed at preventing future deaths.

Throughout the spring and summer, the bipartisan Task Force on Suicide Prevention heard suggestions from the public at hearings around the state. The task force held a press conference Wednesday to officially release several pieces of draft legislation based on those hearings — although the recommendations had come out in some news outlets the day before.

Talking about suicide will help combat the strong stigma around it, said Rep. Joan Ballweg, R-Markesan, and task force chair.

"Education and communication, normalizing the conversation around suicide prevention, can move the needle," said Ballweg.

If passed, the draft legislation will create a statewide suicide prevention program and provide grants for local suicide prevention programming. One grant would provide scholarships for farmers to attend business classes to try and reduce their everyday stress. Another would allow mental health professionals to apply for an interim license to provide care before they finish their usual licensing requirements.

"There is a shortage of mental health workers, as you know, in the northern parts of our state. In fact, there’s 20 counties that don’t have a single psychiatrist that services them," Tittl said.

Another proposal focuses on guns. A study from University of Wisconsin-Madison researchers found suicides made up almost three quarters of all gun deaths in the state from 2000 to 2014.

The bill would give grants to organizations who promote the Gun Shop Project, an effort to train gun shop workers to notice signs of suicide and avoid selling guns to people in crisis, as well as giving those people a place to store their guns to keep themselves safe.

"This legislation is a voluntary way to help save lives," said Rep. Jesse James, R-Altoona.

But to Marc Herstand, executive director of the Wisconsin chapter of the National Association of Social Workers, voluntary ways aren’t always enough.

"It’s not a negative to train gun shop owners, that’s a positive, and to have storage," he said. "But this is so much bigger than that."

Herstand had been lobbying the task force to include red flag laws in their recommendations. Red flag laws allow family or friends to petition a judge to temporarily revoke someone's right to buy, own or carry weapons if they believe that person may be a threat to themselves or others.

A recent Marquette University Law School poll of registered voters in Wisconsin found high levels of support for red flag laws, which are already in place in over a dozen states, including Indiana and neighboring Illinois.

State Democrats have repeatedly called for the legislation. That includes Gov. Tony Evers, who reiterated his support Tuesday at a luncheon in Madison.

The task force is also calling for a quicker release of $110,000 a year to fund a suicide prevention hotline. The money was included in the state budget, but the Republican-controlled budget committee had not released the funding, according to the Associated Press.