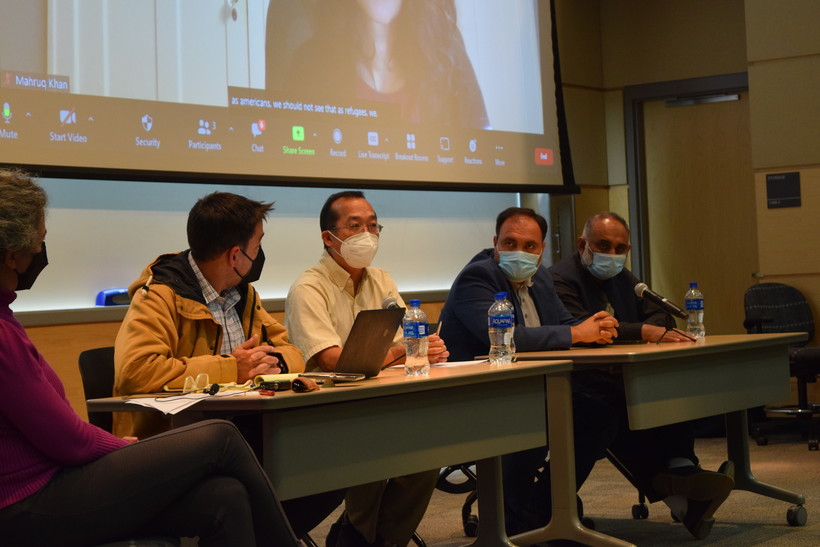 Vincent Her, second from left, talks about his experience as a refugee 40 years ago and how Wisconsin communities can help welcome Afghans being resettled across the state during a panel event at the University of Wisconsin-La Crosse on Tuesday, November 9, 2021. Hope Kirwan/WPR

Not seeing newcomers as foreigners, allowing space to mourn loss of home will help Afghans feel at home in Wisconsin
By Hope Kirwan
Share:

Those who have studied previous refugee experiences say not seeing newcomers as foreigners and allowing space for them to mourn the loss of their home will help arriving Afghan evacuees feel more at home in Wisconsin.

Vincent Her is a cultural anthropologist at the University of Wisconsin-La Crosse who teaches a class on refugees and transnational communities. He was a refugee himself 40 years ago, when his family fled their home in southeast Asia in the aftermath of the Vietnam War and came to America.

During a panel hosted by UW-La Crosse earlier this month, Her said he sees similarities between his family's experience and that of the nearly 65,000 people who were evacuated during the U.S. withdrawal from Afghanistan.

Nearly 13,000 of those Afghans were brought to Fort McCoy, about 38 miles northwest of La Crosse, while they waited to be resettled, and thousands are still currently living on base.

"The decision to leave your country is never planned. It's spontaneous. It is uncertain. Even when you are driven by the need to stay alive, you are never certain about what's going to happen," Her said during the event. "That uncertainty I think is still there (for the Afghan evacuees), much like what my family went through in the 1980s. We knew we were coming to America, but we didn't know what America was. Not on a map, not the direction of travel."

As hundreds of Afghans are settled in Wisconsin over the coming months, Her and the other panelists reflected on what local communities can learn from the experiences of previous refugee groups.

Omar Granados is an associate professor in UWL’s Global Cultures & Languages Department. For the last five years, he has been working to preserve the experiences of 14,000 Cubans who fled to the U.S. in 1980 and were housed at Fort McCoy. Granados said using a military installation to host refugees had a negative impact on the acceptance of Cubans in local communities, and he worries what effect it will have on the Afghans staying there today.

"You're presenting these individuals to the media and to the public as people who need to be contained in a military base, watched by the (U.S.) Army, surrounded by a barbed wire fence. The social future of those individuals already doesn't look too bright," he said.

Granados said there is often a lot of attention given to providing for people's physical needs when being resettled in a community, with donations of food and clothing and resources to help them find a place to live. But he said people arriving in a new country and culture need social and emotional support, too.

"The best thing that we can do for any refugee or migrant is to listen to their story, to validate that story, to allow their cultural narrative to exist. Because that is the only path to alleviate the trauma of migration and the trauma of separation and cultural displacement, allowing that cultural space for mourning," Granados said.

Her said one of the best ways to support new arrivals is by immediately accepting them as fellow Americans instead of outsiders.

"We should not see them as refugees, we should not continue to refer to them as refugees. In the case of Hmong Americans, we have been here for 46 years and many continue to refer to us as Hmong refugees or Hmong," Her said. "I prefer the term Hmong Americans because I basically grew up here. I raised my whole family here and we are as American as any other family. We eat turkey for Thanksgiving and pumpkin pie. Those are a part of our new food culture."

But Her said accepting new Americans into a community doesn't mean expecting them to discard their culture for the food and practices of white Americans.

He said when Hmong people from Southeast Asia started arriving in the U.S. after the Vietnam War, the federal government thought the best way to get people to assimilate quickly was by settling Hmong families in different communities.

"The hope is that if you keep them far apart, then they will quickly adapt, they will quickly become immersed in the community and you will never hear from them again," Her said. "Rather than opening up to the community, they isolate themselves and they keep to themselves. Neighbors will say, 'How come these people are so quiet? They’re not like Americans.' Or if the family does things differently, then they say, 'Well, these people don't behave like Americans.'"

He said it wasn't until these families reunited in communities around Wisconsin that they could regain their identities as Hmong and start to form a new identity as Hmong Americans.

Afghans at Fort McCoy have said they are eager to begin their new lives here and wish the resettlement process could move more quickly. Part of the desire to be resettled is because living conditions are becoming more cramped at the military base as winter weather keeps children and families inside. But some Afghans say people are also eager to experience real life in America and begin working in order to support family that is still in Afghanistan.

But Granados cautions that resettling families across the country will need help to get started.

"It's not just about putting them in the (resettlement) process and speeding the process. It's also the action of accompanying this person, not just for the three months in which they're going to join American society, but becoming an ally in many ways and just clearing the path and opening doors and explaining how things work," he said.

Granados said he hopes Wisconsinites will tap into their shared sense of humanity and see this wave of resettlement as an opportunity to help someone in need.