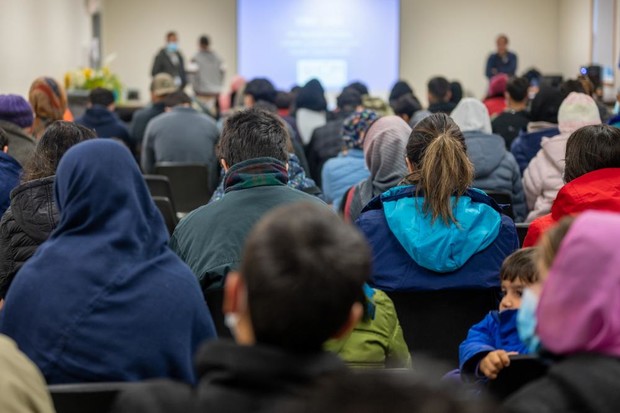 Afghan evacuees receive a resettlement pre-brief, Oct. 28, 2021, at Fort McCoy, Wisc. The evacuees learn about the entire moving process step-by-step from Fort McCoy to their new home in the United States. The Department of Defense, through U.S. Northern Command, and in support of the Department of Homeland Security, is providing transportation, temporary housing, medical screening, and general support for at least 50,000 Afghan evacuees at suitable facilities, in permanent or temporary structures, as quickly as possible. This initiative provides Afghan personnel essential support at secure locations outside Afghanistan. U.S. Army photo by Staff Sgt. Ryan Rayno, 181st Multifunctional Training Brigade

Afghans at Fort McCoy are eager to resettle in new communities, but housing and language barriers are slowing things down

Javed Hamim Kakar is a journalist from Afghanistan living at Fort McCoy with his family while they wait to be resettled in the United States.

Kakar represents the families in his block of barracks at the base, listening to their concerns at nightly community meetings and bringing those to military officials to help solve any issues.

He said the problems with getting food and resources that emerged early on in the Afghans stay at the base have been solved, and now people just ask him when they will be able to leave the base.

"The weather is getting cold, and every family has children, you know Afghans are big families. So the children cannot go outside to play, and they are stuck inside the barracks," Kakar said. "Children are out of school since five months, so (families) want to go to their homes and children can start going to schools."

Kakar said the adults are also eager to start working because of the financial crisis that has affected so many in their home country. He said many people in Afghanistan are no longer able to collect salaries, especially those with government or teaching jobs.

"They are facing financial crisis, and they are hungry," he said. "So we want to go out and start working, and we can manage to send them some money that can solve their food problems."

Afghan refugees began arriving at the base in August.

Kakar said people understand the resettlement process will take time, especially because there are nearly 13,000 people living at the base. But they are still hoping officials will find a way to speed up the process.

Holly Kirking Loomis is the lead for the U.S. Department of State at Fort McCoy. She said across the eight military bases hosting evacuees, roughly 14,000 Afghans that have been resettled, with "a couple thousand" leaving Fort McCoy.

"We have people leaving nearly every day from Fort McCoy, and we are really prioritizing in particular the resettlement of pregnant women, of medically vulnerable guests or those who have other kinds of concerns," Kirking Loomis said.

She said resettlement agencies make sure all new arrivals have access to the appropriate services and care when they arrive in their new communities. That’s part of why resettlement hasn’t happened sooner for the Afghans waiting at bases like Fort McCoy.

"One point I would make is how important it is to balance both resettling people as quickly as we can but also be sure that we’re doing it right," Kirking Loomis said. "If you know that you’re receiving a mom with kids and a new baby, then you would prepare slightly differently than if you're receiving an extended family of multi-generations. So every community that will receive Afghan guests is preparing through the resettlement agency affiliate for the particular needs of that particular family."

She said it’s difficult to say how long the average family will have to stay at the base before they’re resettled because each case depends on their circumstances and their legal status when they arrived. She said where families want to settle in the United States could also affect how quickly resettlement agencies can receive and house them.

"Some places where our Afghan guests might have family connections or other kinds of connections are facing affordable housing shortages. So some of our guests who are looking to go to northern Virginia or Sacramento, (California) may have a longer wait than others, just given the capacity constraints and affordable housing constraints in some of those higher demand areas," Kirking Loomis said.

Affordable housing is also an obstacle for Wisconsin communities welcoming Afghan refugees, said Karmen Lemke with Catholic Charities of the Diocese of Green Bay. She said they've turned to landlord groups and local organizations working on housing access for help.

"(It’s) the identification of landlords or other creative solutions. We’ve been partnering with some of our universities on different housing arrangements," Lemke said.

Lemke said they’ve helped settle 24 individuals so far and have offered to place up to 125 Afghans in the Green Bay area. She said her group often has a couple of weeks to prepare for new arrivals, but sometimes they have only had a few days to line up an apartment and other community services.

"The process is getting better from the standpoint of our awareness of who might be coming," Lemke said "We don't want to be in a crisis situation but in all honesty, that is sometimes what we are facing."

Dawn Berney is executive director of Jewish Social Services of Madison. Her organization has welcomed 35 people so far, with cases evenly split between individuals and families. Berney said the large size of Afghan families has made finding an appropriate-sized apartment difficult.

"We need larger apartments for larger families and Madison does not have many of those available. So we are struggling, and sometimes we are having to put families in temporary housing (in extended-stay hotels) while we continue to look for three- and four-bedroom apartments," Berney said.

Berney said many local residents have offered to house Afghans temporarily in their homes. But she said that can cause more stress for the arriving families, especially when they speak limited English.

She said Afghans will be connected to English language learning program in their communities as soon as possible, but people will need time to adjust and get settled.

"People are coming in and they are exhausted, they are overwhelmed," Berney said. "Three months ago, they did not expect to be in the United States as an Afghan parolee, as a refugee. It's just a major change for people, and it's going to take time."

But resettlement agencies around the state are struggling to find enough people who speak Dari or Pashto to help translate in the meantime.

Lemke said they have been lucky to find some area residents originally from Afghanistan who have stepped in to help.

"They have been coming forward, offering their assistance to welcome, to be that interpreter," Lemke said. "We’ve been using some different services, some different apps, but the best interpretation comes from a member of their community, their language."

Berney said the problem will only grow as other community resources look for similar help.

"We are really over time going to need more people who can interpret because we need it, but also the hospitals and the doctors’ offices, the school district, social security office, social services, everyone is competing for the very few interpreters that are out there," Berney said. 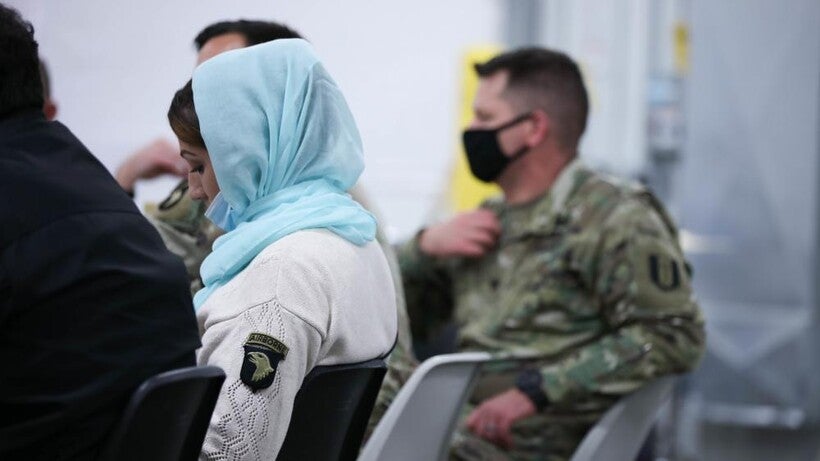 An Afghan evacuee wears a 101st Airborne Division (Air Assault) unit patch during a community council meeting with Task Force McCoy leadership at Fort McCoy, Wisconsin, Nov. 3, 2021. The community council is made up of Afghan evacuee block leaders who meet with Task Force McCoy leadership weekly to ask questions and discuss programs offered to the Afghan personnel here. The Department of Defense, through U.S. Northern Command, and in support of the Department of Homeland Security, is providing transportation, temporary housing, medical screening, and general support for at least 50,000 Afghan evacuees at suitable facilities, in permanent or temporary structures, as quickly as possible. This initiative provides Afghan evacuees essential support at secure locations outside Afghanistan. U.S. Army photo by Pfc. Caitlin Wilkins, 50th Public Affairs Detachment

Wisconsin resettlement agencies have officially committed to welcoming a total of 399 Afghans around the state in the coming months. But Berney said she expects that number will grow substantially given the large number of evacuees who are still waiting at bases in the U.S. and overseas.

Kirking Loomis said new guests are no longer coming to Fort McCoy, in part because the base is one of the most rural and northern installments providing temporary housing.

"Fort Mccoy was one of the first of the eight safe havens to come online, which meant we reached our capacity pretty quickly," Kirking Loomis said. "We’re also focused on ensuring that we have a sustainable population level here as we’re in the colder months now."

She said there are up to 30,000 additional Afghans who could be relocated in the U.S. in the next year. But she there is a policy conversation currently happening in Washington around whether military bases like Fort McCoy should continue playing a role in that effort.

For the evacuees who will remain at the base this winter, Kirking Loomis said officials at Fort McCoy are trying to expand the services they have available, including contracting an endodontist to expand dental services and bringing in the Wisconsin Lions Club to provide eye exams for children.

She said children are not attending formal school but some Afghans who worked in education have been creating lessons for children and English language classes for all ages.