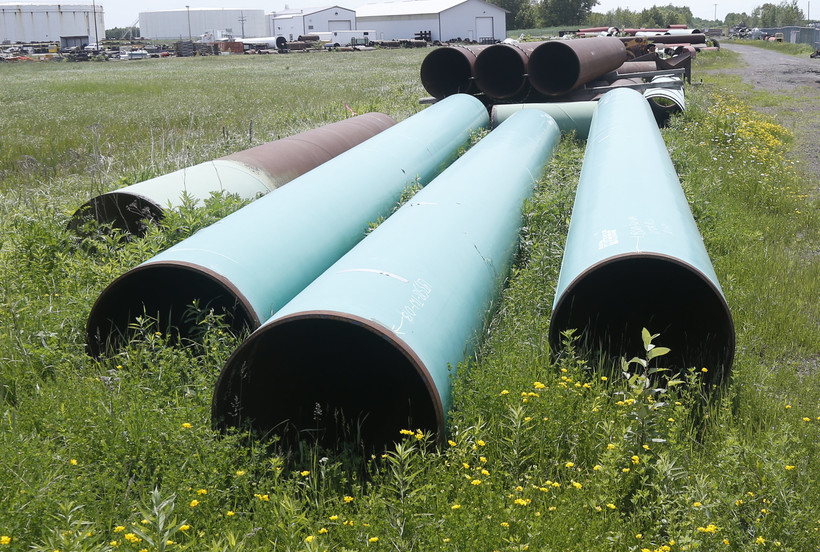 In this June 29, 2018 file photo, pipeline used to carry crude oil is shown at the Superior terminal of Enbridge Energy in Superior, Wis. Jim Mone/AP Photo

Enbridge Says More Information Will Be Provided To Regulators About Line 5 Route
By Danielle Kaeding
Share:

Multiple environmental groups say a Canadian energy firm hasn't provided enough information for state regulators to decide whether to grant waterway and wetlands permits for a proposed pipeline relocation project in northern Wisconsin. Regulators and the company say details have yet to be submitted and reviewed.

But the Wisconsin Department of Natural Resources said it's made a tentative decision to approve the permits with modifications.

Enbridge Inc. is proposing a roughly 40-mile reroute of Line 5 outside the Bad River Reservation in Ashland and Iron counties that would cross more than 180 waterbodies and temporarily impact at least 109 acres of wetlands. Enbridge is looking to move its pipeline after the Bad River Band of Lake Superior Chippewa filed a lawsuit to shut down and remove Line 5 from the tribe's reservation.

Midwest Environmental Advocates (MEA) and nine other organizations submitted comments, raising concerns about the route, surveys and plans that have yet to be completed.

"DNR seems to be proceeding through the process without a complete permit application, which is really troubling," said Rob Lee, MEA staff attorney.

The agency contends it's still early in the process with more work yet to be done, according to Ben Callan, the agency's section chief of integration services within the Bureau of Environmental Analysis and Sustainability. While the application is deemed complete, he said that doesn't mean that the project has met the agency's standards.

"We haven't determined that we're going to issue a permit," said Callan. "We have to go through a lot more evaluation and review before we can make a determination."

Callan added the agency plans to incorporate public input as part of an environmental impact statement, which must be completed before any decision is made. Callan said a timeline for that review hasn't been determined. He noted the EIS would include details on the environmental and socioeconomic impacts of the project, which would also be subject to public comment.

However, the groups highlighted that Enbridge has yet to identify the exact route since it's still working with landowners to acquire property for the project. MEA also argues that Enbridge has failed to provide accurate or sufficient information on specific waterway crossings and its plans to avoid or minimize environmental impacts, as well as ownership information. Groups said the company informed regulators that it had only completed surveys for about 70 percent of affected waters.

Enbridge argues its route was outlined in its application earlier this year and that ownership details have been submitted, adding it expects to wrap up all surveys for the pipeline relocation this week. In February, the energy firm submitted surveys along with data on areas that it hadn't yet reviewed, according to Cathryn Hanson, the company's environmental supervisor. Now, Enbridge plans to submit updated information to the agency, including photos of each of the water crossings.

"It should reflect accurate results from what our surveys have completed and what we are intending to execute," said Hanson.

Hanson said the company is preparing reports and supplemental materials that should be submitted to the DNR by late July or early August.

Yet, the groups also voiced concern about blasting that will be conducted along the pipeline route.

Once a contractor is in place, Hanson said they will develop plans at each of the sites where blasting will be used. She expects those plans to be provided in the next several months as part of the DNR's review before a final decision is made on the permits.

Line 5 carries up to 23 million gallons of oil and natural gas liquids per day from Superior to Sarnia, Ontario. The company contends the pipeline would create 700 jobs during construction and serve as a vital energy link for the region. Environmental groups have opposed the project, citing its and Enbridge's environmental track record of spills. The company said it's invested billions in the safety and integrity of its network.

Enbridge has faced legal challenges on multiple fronts over its Line 5 pipeline, including a lawsuit from Michigan's Attorney General to shut down and decommission the pipeline in the Straits of Mackinac.