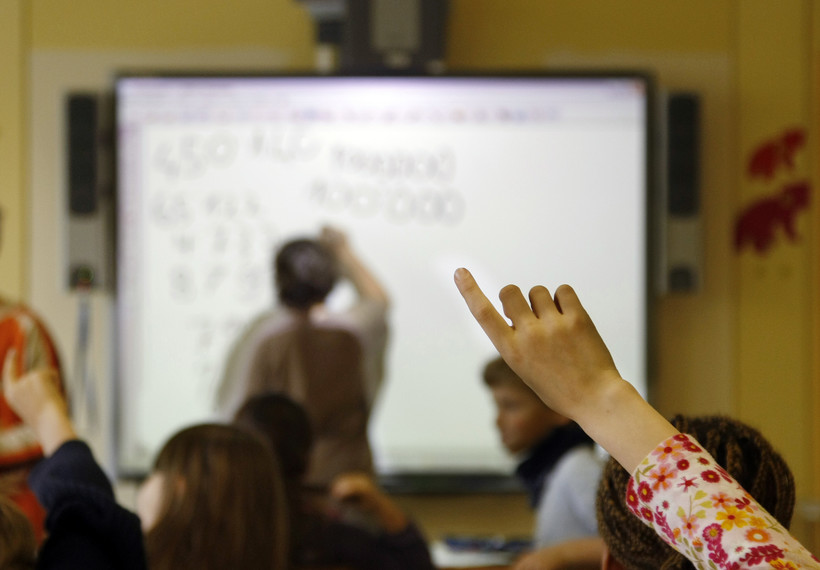 With Enrollment Down And Costs Up, School Districts Brace For Layoffs

The Chippewa Falls Area Unified School District anticipates cutting about 24 jobs going into next school year because of a steeper-than-expected drop in enrollment.

"What they were looking at, and what I had looked at prior to taking the job here, is things were not that dire," he said. "We were a district in declining enrollment the last three years, but were not expecting 149 students to be lost during the pandemic year."

Statewide, Wisconsin public schools saw a 3 percent decline in student enrollment, largely driven by drops in kindergarten and pre-K. Enrollment isn't mandatory until first grade, so some parents, worried about disease spread at in-person school or overwhelmed by the thought of supervising distance learning, opted against school this year.

At the same time, costs have gone up in many districts as they built virtual learning platforms or contracted with online education companies, bought more cleaning supplies or paid their custodial staff for additional hours, hired extra teachers to shrink class sizes to social distance-friendly numbers and otherwise adapted to pandemic learning. Federal COVID-19 relief funding provided an infusion of cash that helped districts cover some of those costs, but as schools approach the one-year mark of pandemic learning, costs have piled up.

Chad Trowbridge, Chippewa Falls' business services director, said his district's biggest cost increases this year came from personal protective equipment and cleaning, as well as setting up an online learning platform. The district is facing a $1.6 million budget shortfall this year. He said overall, staffing accounts for about 75 percent of the district's budget, and the district has about 650 people on staff.

"When you think about it, if we're declining in enrollment, it makes sense to decline in staffing," he said. "If we have fewer kids here to be educated, it probably means it should take fewer of us."

The state sets revenue limits for school districts that restrict how much money they can bring in through a combination of local property taxes and state funding. Those caps hadn't budged from the 2014-2015 school year until last school year. Trowbridge said trying to keep the budget balanced with that frozen revenue limit and rising costs over the last several years meant the district didn't have a lot of other places left to cut costs besides staff.

Chippewa Falls is among the earliest district to announce staffing cuts as a result, but Holmes said he doubts they'll be the last.

"Knowing that there were already school districts besides us that were in declining enrollment, and that the state's average is 3 percent, and we only experienced at 2.7 percent, I'm quite confident that there's other schools very much like us," said Holmes. "If that holds true, that means that there will be plenty of other districts going through the exact same sort of conversation."

Christina Brey, spokeswoman for the Wisconsin Education Association Council, the state's largest teacher and school staff union, said she hasn't heard of any other districts planning for layoffs. She noted that a recent Centers for Disease Control and Prevention study that showed low transmission in schools cited smaller class sizes as one of the necessary conditions for safe in-person instruction — and that keeping students in small groups gets more difficult with fewer staff members.

State funding for schools is determined, in part, by a three-year rolling average of enrollment numbers. Summer school enrollment, which was down even more drastically across the state, makes up a smaller part of that formula. Unions and public education advocacy groups have been pushing the state Legislature to hold school districts harmless for pandemic enrollment numbers, or otherwise protect districts against dips in their funding as a result of COVID-19 declines. Because the formula incorporates three years of enrollment data, even if school districts see their numbers bounce back in 2021-2022, they could feel its effects on their budgets even after the disease has dissipated.

Even if the state controls for this year's bigger dip in enrollment, Trowbridge said it's not likely to stave off staff reductions. This year's drop was dramatic, but he said steady enrollment declines in Chippewa Falls and elsewhere will eventually force the issue.

"Saving grace in any part of that formula doesn't mean that it's going to fix things long term — it could be temporarily put in place to give you some more time to plan for a decline," Trowbridge said. "Hopefully kids return, and hopefully we get back on a growth trend, but if we don't, we have to be prepared to deal with that."

State law requires that districts tell teachers by May 1 that their contracts won't be renewed for the coming year. Trowbridge said Chippewa Falls will settle on its plan in March and April. The most likely scenario, Holmes said, is eliminating 24 positions, ranging from teachers to support staff to administration, but the district's worst-case scenario would cut 41 jobs.