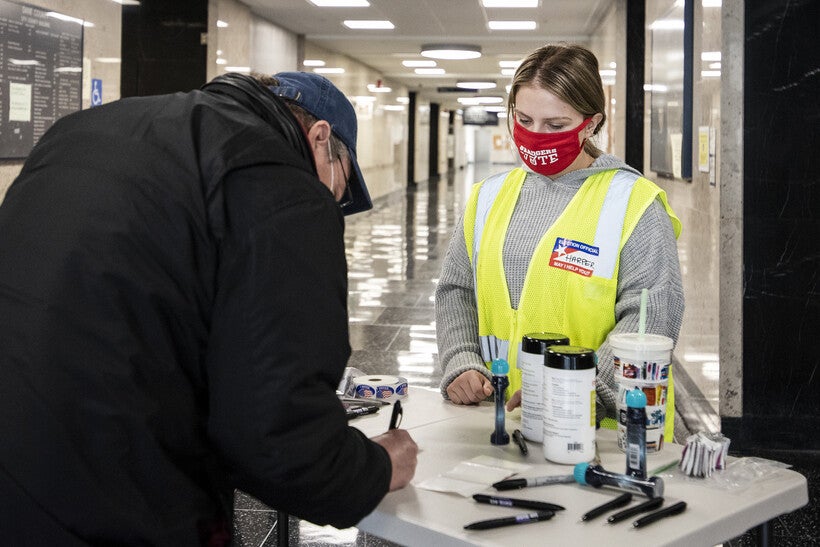 Poll worker Harper Brown helps a voter complete the early voting process Tuesday, Oct. 20, 2020, at the Madison City Clerk's Office. Brown said the line to vote was long when the location first opened, but had shortened by about 10:00 a.m. Angela Major/WPR

As Election Day Draws Near, Efforts Are Underway To Keep Polls Safe And Secure

Election and law enforcement officials are developing plans to make sure voters are safe and to ensure a secure election on Election Day as Wisconsin grapples with the COVID-19 crisis.

Many people are voting early due to the coronavirus pandemic with more than 1 million people who have returned absentee ballots. More than 75,000 people cast a ballot on the first day of early in-person voting Tuesday. That accounts for a little more than a third of all votes that were cast in the 2016 presidential election.

The Wisconsin Department of Justice has been working with the Wisconsin Elections Commission and multiple agencies to identify any threats to state elections, including election interference and voter intimidation. Wisconsin Attorney General Josh Kaul told WPR's "The Morning Show" that Wisconsin law protects people from intimidation at the polls.

"Voter intimidation is a crime," said Kaul. "It's a felony; and if people engage in that activity, they could very well be prosecuted and spend time behind bars."

Fears over voter intimidation have surfaced as President Donald Trump has called on supporters to monitor polling places for evidence of voter fraud, which is uncommon. A recent report from the Wisconsin Elections Commission found only 19 reported cases of possible voter fraud in the state over the last two years. Still, Kaul urged people to report any alleged criminal activity relating to elections.

Under state law, election observers aren't allowed to interact with voters, view ID presented by voters, take photos or videos of the polling place, handle an original version of any election documents or wear and distribute materials promoting a candidate.

Kaul said election officials can take action to prevent any threats or disruptions with voting, including removal of people from a polling place. That also applies to any interference while people are waiting in line to vote.

"If there's something going on in the line, they can go out and take action, they could potentially contact local law enforcement and ask for their help," said Kaul.

Election officials in Superior had to remove a man from a polling place during the spring elections. Superior City Clerk Terri Kalan said the man was "loud and boisterous" with voters who came to cast their ballots.

"He refused to leave at first until the chief inspector told him that she had called law enforcement, and they were on their way, so he was gone by the time law enforcement showed up," said Kalan.

Kalan said people are welcome to observe as long as they follow the law, adding that they've been working with law enforcement to ensure voters will be safe.

"We will have immediate access from law enforcement to respond to any issues that may come up," said Kalan.

Kalan said local election officials are also expecting guidance from the commission on how to address the possibility of firearms at polling places.

The commission's spokesperson, Reid Magney, told WPR's "Central Time" on Wednesday that guidance will include information about state law and local ordinances that govern firearms and what to do if any issues arise. He's encouraging clerks to work with local law enforcement so they're at the polls in case of any problems.

"Now, that said, there should not be like uniformed police stationed at polling places," said Magney. "That's potentially intimidating to some voters, and so that shouldn't happen. Also, you're not going to see any, you know, like National Guard people in uniform or anything like that."

Magney said the commission doesn't have the authority to make any rules about firearms at polling places. However, firearms that are displayed in a threatening manner at or near a polling place would be considered voter intimidation under state law.

The commission has been providing information on deescalation techniques for any conflicts that may arise as part of training sessions with election officials due to the current political climate.

Eau Claire City Clerk Carrie Riepl said she's been working with the city attorney and local law enforcement on a plan to ensure both the rights of poll watchers and voters are preserved.

She said many officers along with other city employees work at the poll sites to make sure they are safe and ensure social distancing, but officers do not appear in uniform.

"If it would escalate to the point where a line has been crossed, we will call the on-duty law enforcement," said Riepl.

Despite precautions being taken, Kaul said he's optimistic the process will run smoothly.

"We've got a very transparent process in Wisconsin, and that includes allowing for people to go to polling locations to observe the process, and that's something that has happened in many elections in Wisconsin," said Kaul. "That should in no way interfere with what's going on with voting."