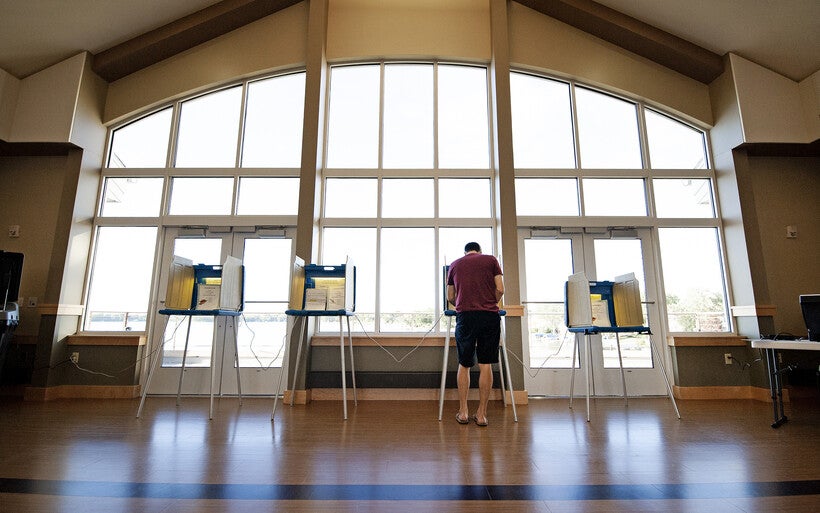 During Tuesday’s presidential debate, President Donald Trump repeated a familiar call for his supporters to monitor polling places across the country for voter fraud. In Wisconsin, election observers are common and officials say they have nothing to hide.

"This is going to be a fraud like you’ve never seen," the president said near the end of the 90-minute debate Tuesday evening, the first of this presidential election cycle. "I’m urging my supporters to go into the polls and watch very carefully, because that’s what has to happen."

The president issued the same call in 2016, leading some to raise concerns about voter intimidation and point out voter fraud is very uncommon.

In Wisconsin, a recent report from the state Elections Commission found fewer than 20 incidents of possible voter fraud between the 2018 general election and this year’s fall partisan primary. Several million ballots were cast over the course of those elections.

"It’s a good way for people to get a much better understanding about how elections work," Magney said.

This year, poll watchers will be required to wear masks when they are inside polling places to limit the possibility of spreading the coronavirus, Magney said.

Under law, election observers must stay within a designated observation area between 3 and 8 feet from the places where people register to vote or announce their name and address to receive their ballot.

According to a summary of state law provided by the state Elections Commission to groups in 2018, observers are not allowed to:

Observers are allowed to raise concerns about individual voters if they have personal knowledge the voter in question isn’t qualified to vote because, for example, they are underage or don't live in the area. All concerns must be supported by specific evidence and brought to the attention of the polling place’s chief inspector.

Observers who abuse the process may be asked to leave the polling place by its chief inspector, who must provide written documentation summarizing the reason the observer is asked to leave.

"Behavior that is disruptive, including conversing with or intimidating voters, or causing undue delays in the registration or voting procedures, will not be tolerated," the 2018 Elections Commission guidance said.

The state also empowers chief inspectors to control the number of election observers on site, allowing them to ask some watchers to leave if the polling place becomes too crowded.

During a Sept. 16 event at Marquette University, Election Commission head Meagan Wolfe said, in light of the current political climate, things like deescalation techniques for conflict situations are being emphasized in training sessions with election officials ahead of Election Day.

Poll watchers may stay at an election site after polls close at 8 p.m. to observe continued work, including the final printout of election results from the voting machines at the site. After results are printed, machines are connected to an encrypted network and transmit results to county election officials.

Magney said people should consider becoming poll workers if they want to have more hands-on involvement on Election Day.

"Instead of sitting there and watching things, why not get some training, get paid, and really become part of the process and help out your local community," he said.

To serve as a poll worker, you must be at least 18 years old, except for specially qualified 16- and 17-year-old high school student poll workers, and be a U.S. citizen. Under state law, employers are required to give employees unpaid leave to be a poll worker, as long as the employee gives at least seven days notice. Training for poll workers is conducted by local election officials and is being offered online during the COVID-19 pandemic.