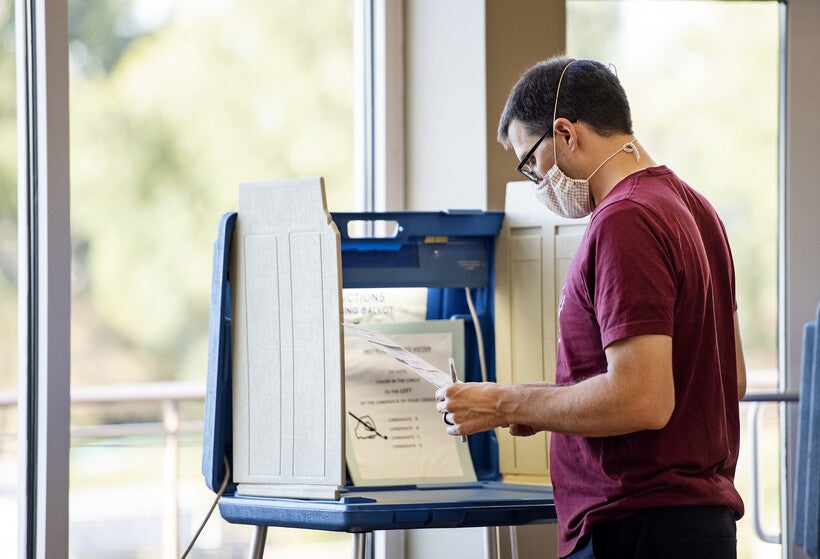 Brandon Combs of Oconomowoc glances at his ballot after filling it out Tuesday, Aug. 11, 2020. Angela Major/WPR

Election Day is still two weeks away, but Wisconsin voters can begin early voting Tuesday. It runs through Nov. 1.

Voters will need to show a photo ID when they go to vote in person.

Reid Magney, a spokesperson for the Wisconsin Elections Commission, said hours will vary at polling places across the state and some smaller towns will require voters to have an appointment.

At some polling places across the country that began early voting before Wisconsin, there have been long lines of voters waiting to get into their polling locations.

"Those are also in places where the weather is nice, and it’s supposed to be in the 40s tomorrow with rain, so how many people show up tomorrow to do that, is a really good question," Magney said Monday.

Magney said it’s safe to assume voter turnout will be high for this year’s presidential election, but how high is unclear.

"Presidential elections in Wisconsin tend to cover about 3 million voters," Magney said. "The 2016 election was a little less than 3 million. But based on what we’ve seen from voters, we probably expect it to be a little more, but that’s hard to say."

Magney said because of the coronavirus pandemic, voters are encouraged to wear masks to the polls, follow social distancing rules and bring their own pens, although sterilized pens will be provided.

In Madison, Deputy City Clerk Jim Verbick is expecting a lot of voters who are eager to get their ballots cast.

Madison will have 13 early voting locations and one appointment-only location.

Verbick believes turnout will be high.

"It has been steadily increasing," he said. "We had quite a lot two years ago for the November 2018 election. It is hard to estimate if it will be higher than that one. But we do expect a very high turnout."

Milwaukee also has 13 early voting sites. The city originally planned to work with the Milwaukee Bucks and Brewers to hold early voting at the Fiserv Forum and Miller Park, but those plans were canceled. Milwaukee officials feared using the sites could be legally challenged due to a recent court ruling, and that ballots placed there could be at risk of not being counted, Claire Woodall-Vogg, Milwaukee Election Commission executive director, said.

Green Bay is planning on a robust early voting period. The city has one site, the clerk’s office at City Hall, said Celestine Jeffreys, chief of staff for the Mayor of Green Bay.

Green Bay has also been staffing up for Election Day. The city has about 380 poll workers and is hoping to have 500 by Election Day.