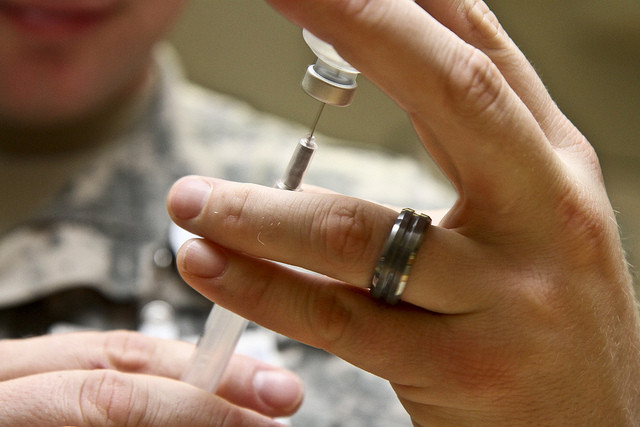 Fall is the time of year to get a flu shot. Photo: US Army Corps of Engineers (CC-BY).

Doctor Offers Guide To Flu Season, Getting Vaccinated In Wisconsin

While This Year’s Vaccine Is Same As Last Year, Annual Booster Is Still Needed
By Judith Siers-Poisson
Share:

Scattered cases of influenza are already showing up in Wisconsin, but luckily, vaccines have also started becoming available.

Witht that in mind, a Wisconsin physician offers a guide to what people need to know about this year’s flu season and the process of getting the vaccination.

First of all, it's a good idea to review what “the flu” is in the first place. Dr. James Conway, who teaches at the University of Wisconsin School of Medicine and Public Health and specializes in infectious diseases in children, said that while the term is used for a wide range of ailments, medically speaking it’s a “respiratory virus that’s highly contagious and transmitted very readily from person to person.”

“Those are the ones that really end up being much more complicated and can end up leading to a lot of problems and unfortunately, in some cases … death,” he said.

Each year,  flu vaccines are formulated to respond to the most likely and most common strains of the virus present that year — an assessment made by the World Health Organization and the U.S. Centers for Disease Control and Prevention after they analyze data from the Southern Hemisphere’s winter flu season.

Conway said that based on this year’s assessment, the vaccine formulation for this year will be the same as 2013’s. He nevertheless cautioned that people who got the flu shot last year should still get another one this year, since the immunization doesn’t last for that long.

“We do try to teach them to work and play well, and share, but unfortunately they also share a lot of secretions,” Conway said.

Other groups that are considered to be high-risk are those for whom the complications that can come with flu are more of a concern. Conway said that those groups include elderly people, smokers, people with asthma, and people who have a compromised immune system.

Pregnant women are of particular concern because recent flu outbreaks have shown them to be particularly susceptible. Conway emphasized that the risk in those cases aren't only to women, but to the unborn fetus as well.

There are several options for receiving a flu shot, according to Conway. He said that a flu mist that is given nasally, without any needle, actually appears to be more effective than shots for young children. Similarly, he said that there are higher-potency formulations for elderly patients and other high-risk populations.

Conway said that the immunity builds in the recipient over a period of about two weeks after the injection is given, which means getting the vaccination as early in the season as possible is wise. He added the immunity provided by a flu shot in August will last easily until the end of the flu season in May of the following year.

“There’s no concern in most of our minds, now that we’ve got better science around this, that it’s ever too early to vaccinate,” said Conway.

UW Health provides comprehensive information on this year’s flu season and the flu in general.

For information on getting vaccinated against the flu, contact a primary health care provider or use this listing of Wisconsin Local Health Departments and Tribal Health Clinics to find a location.