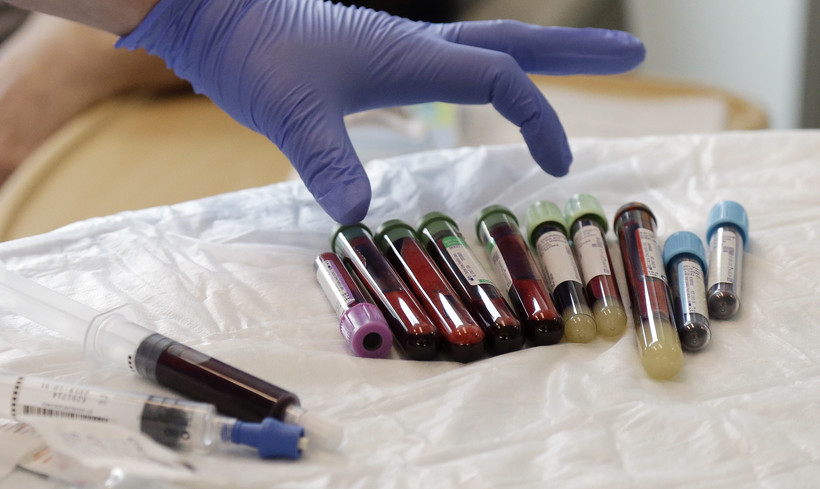 In this photo taken March 21, 2017, a nurse reaches for blood samples taken from a patient receiving a kind of immunotherapy known as CAR-T cell therapy at the Fred Hutchinson Cancer Research Center in Seattle. Immune therapy is the hottest trend in cancer care and its next frontier is creating "living drugs" that grow inside the body into an army that seeks and destroys tumors. Elaine Thompson/AP Photo

Some of the most deadly cancers are also among the hardest to detect before symptoms appear, but Wisconsin researchers used technology to develop what they believe could be a more effective and inexpensive way to identify cancer early.

Researchers at the University of Wisconsin-Madison analyzed fragments of DNA floating outside of cells in plasma samples to test for markers of cancer. The researchers accurately distinguished between cancer patients and healthy individuals 91 percent of the time.

"We would hope that it would help us diagnose patients with cancer earlier and at a point where they can still be treated with surgery and other existing treatments that we have and cured of their disease," said Muhammed Murtaza, an associate professor of surgery at the UW School of Medicine and Public Health.

Murtaza is also the associate director of the Center for Human Genomics and Precision Medicine. He led the study, published in Science Translational Medicine.

The team studied sequencing data from more than 2,600 blood plasma samples from nearly 1,000 patients with one of 11 different types of cancer. Among others, those include brain, breast, liver, lung, stomach and bile duct cancer.

"By including these multiple different cancer types, I think what we've shown is that what we're measuring is relevant across cancer," Murtaza said, though there is some variation. The test was more accurate for brain and bile duct cancer, for example, than gastric, but he said they hope to improve the results in the future by focusing on one type of cancer at a time.

Even for patients with Stage 1 cancer, the model was accurate 87 percent of the time.

"Our hope would be that we catch the cancer before it metastasizes and potentially be cured using existing clinical approaches," Murtaza said. 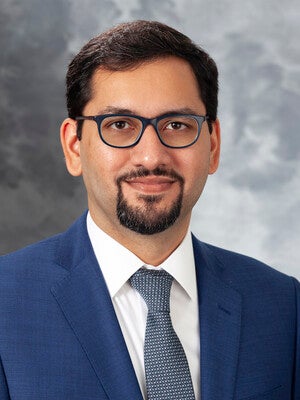 Muhammed Murtaza led a study at UW-Madison, using DNA from blood samples to test for markers of cancer. They accurately distinguished between cancer patients and healthy individuals 91 percent of the time. Photo courtesy of Muhammed Murtaza

The concept of using a blood sample to identify a cancer patient is not new, but Murtaza said this study suggests that researchers can work with a fairly small amount of blood in a much more cost-effective way — about $50 or less for a sample run in the research lab.

"Lots of work has been done in the field of liquid biopsies, focusing on mutations. I think what differentiates this is the focus of our work on trying to look at fragmentation patterns," Murtaza said.

The researchers also used a machine-learning approach to separate the samples.

As for next steps, he said, the team hopes to investigate whether their approach could be paired with existing diagnostic tests for patients at high-risk of developing specific kinds of cancer.

Another possibility is using the samples to see how patients undergoing chemotherapy are responding to treatment.

Rebecca Minter, professor and chair of the Department of Surgery at the UW-Madison School of Medicine and Public Health, leads a pancreatic cancer prevention program. She said that while many of the most deadly cancers are relatively rare, few effective methods exist beyond imaging.

"The problem is with imaging alone, we often will see nothing and then the next time we image we can see a large cancer," she said.

For patients with pancreatic cancer, the five-year survival rate is about 12 percent, often because their disease has progressed to a late stage before doctors can intervene with curative therapies, she said. In part, it's also because of biology. Minter said some tumors are so deadly, and some cells too aggressive.

But she thinks Murtaza’s research can help doctors intervene early.

"It allows us to look, in a nonspecific way, for a lot of bad cancers. And then we can hone in on what the actual cancer might be from there," Minter said.

She added "it has the potential to affect people worldwide," especially Wisconsinites who will be among the first to access clinical trials, treatments and therapies.

"The great sort of milieu or environment in Madison in particular, with startup facilities that can help now take these types of discoveries to the next level, is really exciting," Minter said.

Murtaza said the team plans to apply for future funding from the NIH to validate their approach. The researchers could also partner with industry, he said, as some companies have already expressed interest.

Over the last three decades, the U.S. cancer-mortality rate has fallen by one-third, according to a recent report from the American Cancer Society, a trend Murtaza attributed to progress in early detection and treatment.

"Our study is another sort of step in that direction and trying to make early detection feasible across a large section of our society, and then making such a test more accessible and cost-effective," Murtaza said.