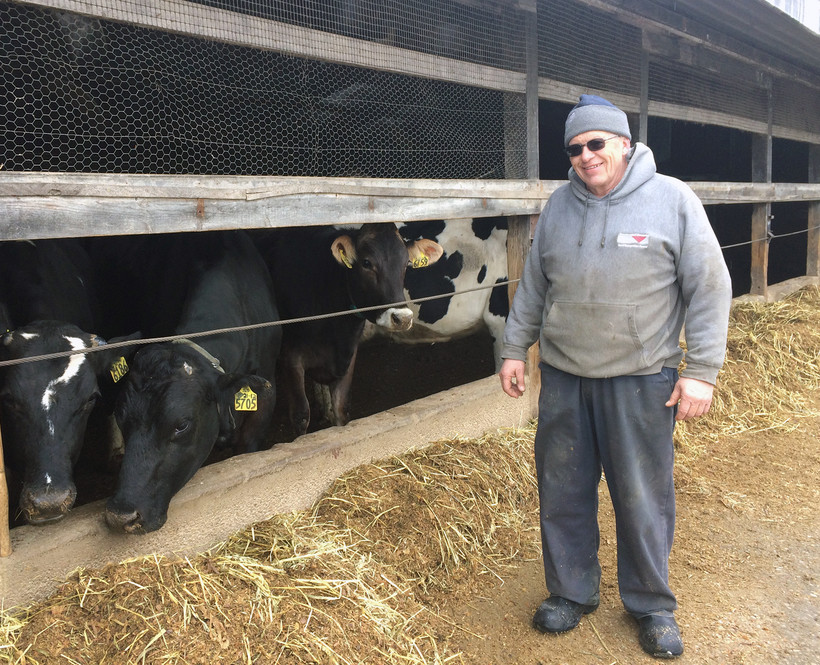 Jack Herricks at his farm in Cashton, Wisconsin. Hope Kirwan/WPR

"I would have a better chance of getting a dollar by helping my grandkids dig for quarters in the sand pile than I would be by spending any dollars on MPP," said Herricks.

Experts say that the program is intended to protect farmers from market fluctuations, but because of the way it was set up, only a handful of farmers are getting that protection, while many others, like Herrick, are left to feel the pinch of lower milk prices.

Congress created MPP to replace other dairy programs that paid farmers a subsidy if domestic milk prices fell below a certain amount.

"The shift was taking place in part to align dairy programs more with crop programs, which have been based on insurance ideas for quite a few years now," said Mark Stephenson, director of dairy policy analysis at the University of Wisconsin-Madison. "The reason we got away from direct payments was to be more in line with other (international) trading partners."

Stephenson said MPP is similar to car insurance and makes sure farmers can cover their expenses.

"Producers decide the level of coverage or safety protection that they want, a little bit like thinking about how much deductible would I want on an auto insurance policy," Stephenson explained.

The program subtracts the average cost of feed in the U.S. from the average price farmers receive for their milk to find a production margin. If that margin falls below a farmer’s level of coverage, they receive a check to cover the difference.

Stephenson said lawmakers wanted to protect farmers from high feed prices, an issue that affected the dairy industry in 2012.

"That was a time when people were thinking, 'Farmers can be vulnerable not only to low milk prices but also high feed prices,'" Stephenson said. "Since that time we haven’t had particularly high feed prices. Its been more (low) milk prices and the margin has not been sensitive enough to cover those needs." When milk prices fell in 2015, feed prices also experienced a major decline. So even though farmers were receiving about 29 percent less for their milk, MPP’s calculations did not trigger a payment.

Herricks said he wanted to opt out of the program after the first year of receiving no help.

"In a stressful economic time like we’re in now is when there should be a program that would be kicking in to help support us and it's just not there," Herricks said.

As milk prices have continued to stay low, only producers with the highest levels of coverage have ever received a payment from the program. A 2017 report from the Congressional Research Service found premium payments from farmers have exceeded what the program has paid out.

Stephenson said it's obvious the MPP formula wasn't working: "Congress did not intend this to be an income stream for the U.S. Treasury, they intended it to be a safety net for dairy farmers."

National lawmakers have taken steps to fix the program. In the budget deal passed in February, Congress approved legislation to lower the premium costs of MPP coverage.

"What they did for those ... premiums is to reduce them dramatically. They’re something like 80 percent lower in cost than they were before," Stephenson said.

Lawmakers also switched the program from a bi-monthly calculation to a monthly payout, making the program more responsive to changes in milk prices.

"All of those things make the program a little bit more sensitive so I think it will be more appealing to dairy farmers to look at this," Stephenson said.

But whatever their opinion, Congress is unlikely to make any more changes to the program in this year’s Farm Bill discussions and President Donald Trump has proposed cuts to federal crop insurance programs in his 2019 budget plan.

While lawmakers have not revealed their proposal for the next U.S. Department of Agriculture spending bill, Stephenson said dairy has been a sticking point in previous Farm Bills and many lawmakers already feel producers have received the changes they need.

Even with all of the changes, Wisconsin's Herricks said he won’t be signing back up for the program.

"MPP is kind of like a ship that’s left port," Herricks said. "They're trying to get the word out that they’re going to come back and see if there are any more passengers, but I don't think there’s going to be many at port side wanting to get on.”

Herricks said he’s not entirely opposed to the program, but with no sign of an improvement in milk prices this year, he’s not interested in spending money on a program unless he knows it will work.

"We’re not inclined to spend money after something that doesn’t offer much of a return," Herricks said. "So my outlook on it is very guarded, to see ‘OK, are these changes really going to offer the potential of helping out or not?'"