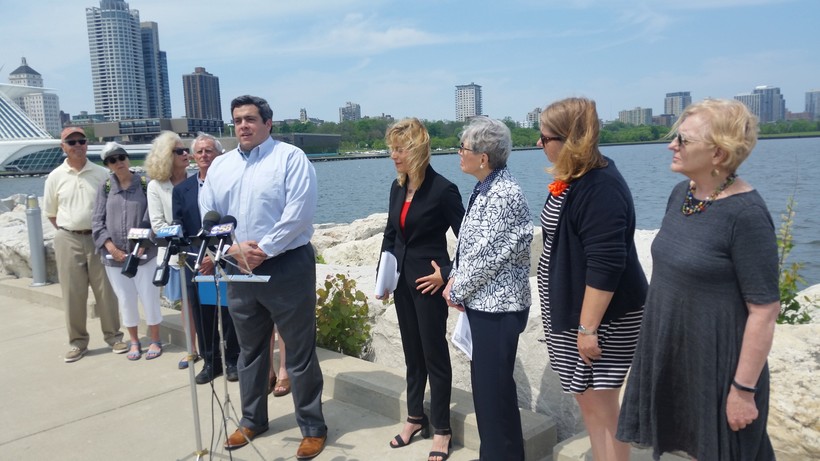 The Wisconsin Department of Natural Resources says it is studying a petition filed last Friday to take another look at the Lake Michigan water diversion approved in April for the Foxconn factory being built in Racine County.

The state agency is being asked to allow an administrative law judge to review plans to have Racine take 7 million gallons of water a day from Lake Michigan and send it to Foxconn for use in the production of liquid crystal display panels.

Environmental groups and others explained their request at a Milwaukee news conference Tuesday afternoon.

Petitioner Louise Petering of the League of Women Voters of Wisconsin said the DNR incorrectly ruled the diversion would be for public purposes, allowing it under the 2008 Great Lakes Compact.

"This precedent, if allowed to stand, undoes a core provision of the Compact, essentially unraveling the international agreement and it will do undetermined damage to the sustainability of the Great Lakes," Petering said.

In documents released Tuesday by the DNR, the agency argues the water piping system in Racine serves the public, and therefore the diversion to the Foxconn site outside the Great Lakes Basin meets the Compact's public water supply requirements.

But Jodi Habush Sinykin of Midwest Environmental Advocates said that claim is faulty.

"It's a stretch. But worse than that, it is a misinterpretation not just of the letter of the Great Lakes Compact — the actual words — but of course the intent and spirit, which is to provide very limited exceptions to diversions of Great Lakes water outside the Basin," she said.

Attorney Jimmy Parra of Midwest Environmental Advocates said he thinks the petition meets the standard for a review by an administrative law judge. But said the case could quickly end up in a county court, or before the Wisconsin Supreme Court.