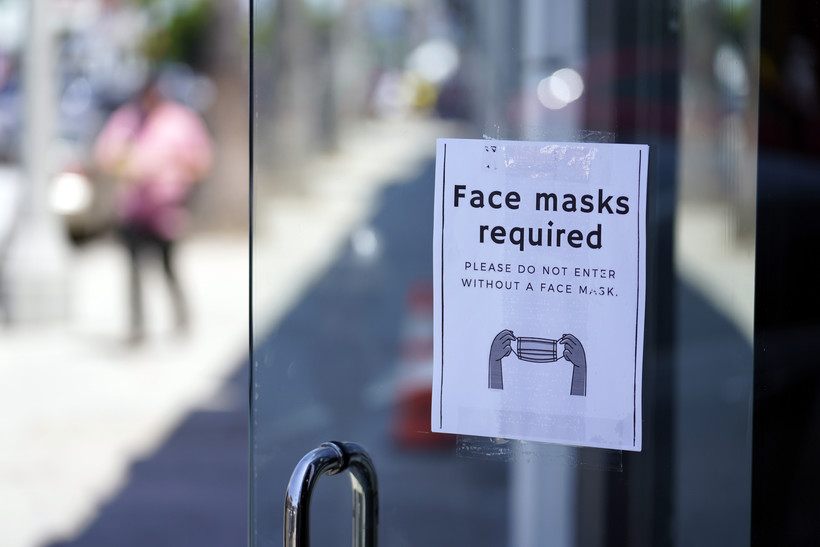 A sign advises shoppers to wear masks outside of a store Monday, July 19, 2021, in the Fairfax district of Los Angeles. Los Angeles County has reinstated an indoor mask mandate due to rising COVID-19 cases. Marcio Jose Sanchez/AP Photo

A conservative member of the Dane County Board is calling for public health officials to immediately "pull back" a mask mandate until elected officials and the public can weigh in. But the proposal is getting resistance from doctors and researchers who help set local health policy.

Supervisor Jeff Weigand has introduced a resolution calling for the health officials to explain the reasoning behind their emergency order.

The Dane County Board of Health fired off a letter to the community in response, calling it "disheartening" that Weigand is spreading what it called misinformation by suggesting public health decisions aren’t based on science, facts and data.

"Public health at its core deeply values the input of the community and stakeholders it works with. But during emergency situations, we have to act quickly, look at the data and what’s working to make those decisions," said Kim Whitmore, a member of the Dane County Board of Health who is an assistant professor in the College of Nursing at Marquette University.

A Marquette University Law School Poll in October found mask mandates to be very popular with Wisconsinites. That survey was taken when COVID-19 cases were spiking.

Cases again are on the rise around Wisconsin but have not reached levels of last fall and winter. Many communities that had mask mandates decided not to issue them again, instead relying on the community to willingly do so as the more contagious delta variant emerged. Others, including Dane County and the city of Racine, implemented new masking requirements.

There has been pushback in those communities.

"So while popular opinion may often go against science and data, we have to make sure we are driving all these decisions with that in mind, so our community can continue to be kept safe in the midst of this pandemic," Whitmore said, noting the general public may not have all the expertise the health department has.

In August, the Wisconsin Supreme Court effectively allowed the county’s mask mandate to remain in place by issuing an order denying a request to hear a lawsuit against it. Instead, the high court left it up to the state's lower courts to consider any future legal challenges first.

Editor's note: This story has been updated to reflect Kim Whitmore's current position at Marquette University.