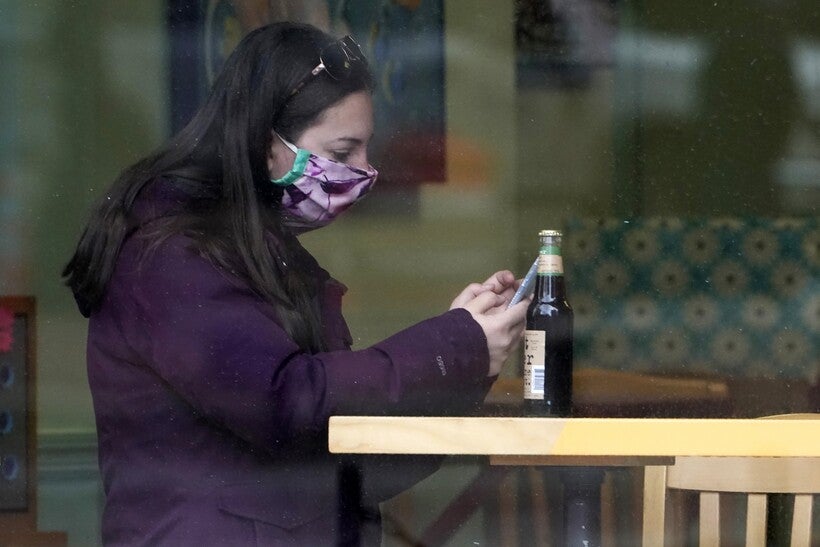 A person wears a face covering to help prevent the spread of coronavirus at a restaurant, Tuesday, Nov. 17, 2020, in Portland, Maine. Robert F. Bukaty/AP Photo

Hoping to avoid a repeat of last year's fall surge of COVID-19 cases, state health officials are urging Wisconsinites to mask up before the Labor Day holiday weekend, avoid indoor gatherings and stay home if sick.

Some local governments are going even further by requiring face coverings indoors. On Tuesday, the city of Racine passed an indoor mask mandate in public spaces that could go into effect on Saturday.

The city of Merrill in Lincoln County is requiring face coverings in all city facilities, Mayor Derek Woellner announced Tuesday. In a Facebook post, Woellner cited data from the Lincoln County Health Department that showed in the past month, more than one-third of people tested were positive for COVID-19 and that out of 10 people hospitalized for the disease, only one was vaccinated.

Relatively low vaccination rates is also a factor in the city of Racine's decision to require masks, replacing a previous order that ended June 30. Officials with the city's Health Department said 41 percent of residents are fully vaccinated and additional precautions are needed.

Critics lambasted the new measure as the "tyranny of government" during a public meeting, but some residents welcomed the mandate. Jeremie Anders told Racine alders that the policy would protect children under 12 who can't be vaccinated yet and could prevent hospitals from filling up.

"This pandemic has gone on way too long, and we need a reprieve. Masking will help," he said. “I believe we are obligated to do many things for public safety such as stopping at a stop sign and wearing a mask should be no different to protect others."

COVID-19 cases are rising in Wisconsin due to the more contagious delta variant. State health officials say people who aren't yet fully vaccinated continue to make up the majority of cases, hospitalizations and deaths from the disease.

In India, a devastating surge caused by delta ended relatively quickly and there are signs that might be the case in the U.S., where the rise in new infections is slowing somewhat in the South.

Dr. Ryan Westergaard, chief medical officer at the Wisconsin Department of Health Services, cautions that the variant is unpredictable.

"So we certainly should not count on the fact that the delta surge, everywhere else it's happened lasted two months, and then it peaked and went away. We can't be complacent and assume that's going to happen," he said during a media briefing Wednesday.

The seven-day average for new infections is higher than it has been in six months, according to state data. Hospitalizations were up by 130 patients compared to last week.