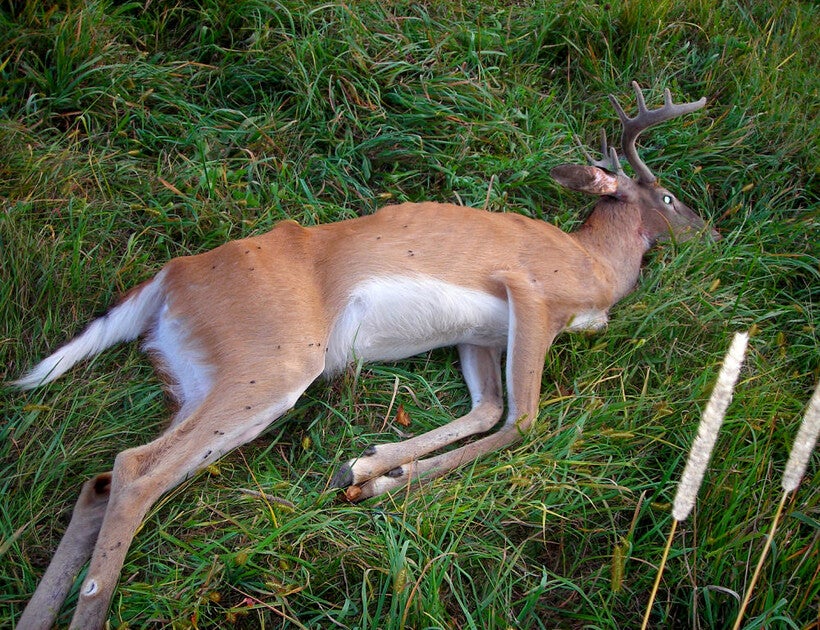 This 2½-year-old buck was found dying of chronic wasting disease in Iowa County, Wis. Iowa County is one of the hardest hit locations for CWD in Wisconsin. Wisconsin Department of Natural Resources

Almost twice the number of deer tested positive for chronic wasting disease in 2018 from the previous year.

The state Department of Natural Resources announced this week more than 17,200 deer were sampled for CWD in 2018, of which 1,061 deer tested positive. In 2017, there were 597 deer that came up positive for CWD out of 9,841 deer sampled. Sampling data shows the CWD prevalence rate remains around 6 percent compared to 7 percent in 2016 and 9 percent in 2015 when fewer deer were sampled.

Tami Ryan, chief of the DNR's Wildlife Health Program, said the vast majority of deer that tested positive were in southern Wisconsin.

"We're seeing an increasing trend in the number of positives from year to year that are being detected," she said. "That is primarily a pattern that is emerging from the southern farmland zone.”

CWD was first detected in southern Wisconsin in 2002. Since then, around 5,200 deer have tested positive out of more than 227,000 sampled, according to the DNR.

Former Gov. Scott Walker came under criticism for the state's handling of CWD as it spread across the state. During his campaign for re-election, Walker called for emergency rules to address CWD that sought to require double-fencing of deer farms and ban movement of deer carcasses from CWD-affected counties. An emergency rule that required double-fencing expired this year and state lawmakers suspended a DNR rule in October that would prevent the movement of deer carcasses from infected areas.

Critics have now taken aim at Gov. Tony Evers for not including funding in his budget to address CWD. DNR Secretary Preston Cole has defended the governor, saying Evers is waiting for research results on the disease. He added the DNR needs to do more to increase hunter participation in sampling.

The agency has done just that in the last year, said Ryan.

Ryan said focused surveillance across 19 counties in west-central Wisconsin and the use of self-service kiosks by hunters helped drive increased sampling in 2018. She said the 24/7, do-it-yourself approach to sampling deer has received positive feedback from hunters and staff. The agency has also seen more participation from hunters as concerns over the disease are on the rise.

"We are certainly seeing an increasing trend in the interest on behalf of deer hunters to have their deer sampled more so from the standpoint of wanting to know whether or not the deer have CWD," she said. "They're using that information to inform whether or not they’re going to have that meat processed or consume that meat."

There are 56 counties now affected by the disease in the state — a dozen of which have been added in the last year. Ryan said the DNR plans to focus surveillance across 18 counties in northern Wisconsin this year as part of sampling efforts.