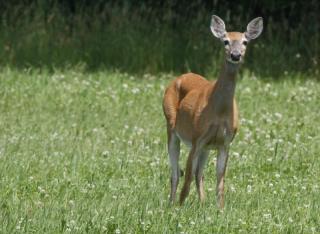 The Legislature's rules committee voted to suspend a new restriction that would have prevented hunters from moving deer out of CWD-affected areas of the state. The committee voted 6 to 4 to block that portion of an emergency rule that was designed to slow the spread of chronic wasting disease.

A motion to suspend restrictions that require added fencing of deer farms failed 4 to 6.

Lawmakers debated the rule that was developed to ban movement of deer carcasses from CWD-affected areas and require deer farms to add another layer of fencing within a year. They also took issue with enacting new restrictions just weeks away from the state’s nine-day gun deer season.

State Rep. Adam Jarchow, R-Balsam Lake, argued the emergency rule is an example of executive overreach in an election year. He called the restrictions "pure pandering."

"It’s a political stunt masquerading as policy and those who will suffer from it are hard-working folks who live in my district and like to hunt," he said. "My constituents work all year long. They sacrifice their vacation and they work overtime, so they can have that one week a year of Wisconsin’s deer-hunting tradition. Now, if they get a deer, they can’t bring the damn thing home without following some absurd procedure or paying someone to butcher it."

Since 2002 when CWD was first discovered statewide, 55 out of 72 counties have become CWD-affected areas.

In May, Gov. Scott Walker ordered the Wisconsin Department of Natural Resources to require new restrictions to prevent the spread of the disease. The Natural Resources Board approved an emergency rule in August.

Walker has been criticized for not taking more aggressive action on CWD during his term. A Walker spokesman said the governor has been listening to concerns across the state.

"Governor Walker has worked to protect Wisconsin’s strong hunting heritage and he will continue to work with all interested parties to fight the spread of CWD," wrote Walker spokesman Tom Evenson in an email.

Scott Karel, the DNR’s program and policy analyst, pushed for the emergency rule to take effect.

"This new rule will help ensure that carcasses most likely to pose a risk of spreading CWD are not transported to areas where CWD is less prevalent or has not yet been detected," Karel said.

The rule was set to take effect Oct. 1, but State Sen. Steve Nass, R-Whitewater, called a public hearing of the Joint Committee for Review of Administrative Rules to consider blocking the new restrictions.

Nass, co-chairman of the committee, posed questions to DNR staff about enforcement, noting the committee had received "numerous" emails from hunters concerned about transporting deer across county lines.

"The first year is educational," responded Scott Loomans, the DNR’s wildlife policy advisor. "It’s definitely possible to get cited though."

Under the emergency rule, deer would have had to remain in its county of origin unless it was submitted for CWD testing, deboned, quartered or taken to a licensed processor within 72 hours of leaving the county where it was harvested.

Mark Brust with the Wisconsin Bowhunters Association said the regulations on hunters are unenforceable. He said it would likely result in hunters leaving carcasses behind in the woods or less participation in the state’s hunting heritage.

"Some hunters that have always butchered their own deer have already indicated they would quit hunting before taking their deer elsewhere," Brust said.

The new restrictions have also been widely opposed by the state’s deer farmers, who have argued added fencing requirements may put them out of business. The DNR estimates it would cost farmers around $876,000 to nearly $1.3 million for fencing materials, but those figures do not include installations costs.

Rick Vojtik, president of Whitetails of Wisconsin, said double-fencing would do nothing to slow the spread of CWD.

"These costs are overboard and extreme. The fencing costs are one portion of the cost and, in itself, too costly," said Vojtik. "The cost for me to clear the two-and-a-half miles of fence in order to install the fence puts this way over the top. It’s not just the fencing alone."

A number of deer farmers echoed that sentiment, saying it may cost individuals hundreds of thousands of dollars to comply. They also said the timeline for installing additional fencing was not realistic.

"Myself, I’m 67 years old and I’m still working nights. I’m not asking for any pity. All I’m stating is a fact: (I’m) trying to keep these deer alive and fed and in good condition," said deer farmer Michael Gillis of Suamico.

However, tribes, conservation and wildlife groups said the rule was vital to protecting the state’s multi-billion dollar wild deer herd. Research has shown CWD can be spread through proteins called prions that are found in an infected animal’s urine, blood, feces and saliva. The disease can also be spread directly from animal to animal or indirectly through the environment where an infected animal had lived.

"There currently is a shooting preserve in central Wisconsin in Marathon County that has had 74 positive CWD deer on it, and it only has a single fence,” said George Meyer, executive director of the Wisconsin Wildlife Federation. "That is a very dangerous situation."

According to documents obtained by Wisconsin Public Radio, Wilderness North in Marathon County had 74 positive tests as of early May this year. Under current regulation, shooting preserves are not required to depopulate deer herds since all animals are dead when they leave the farm.