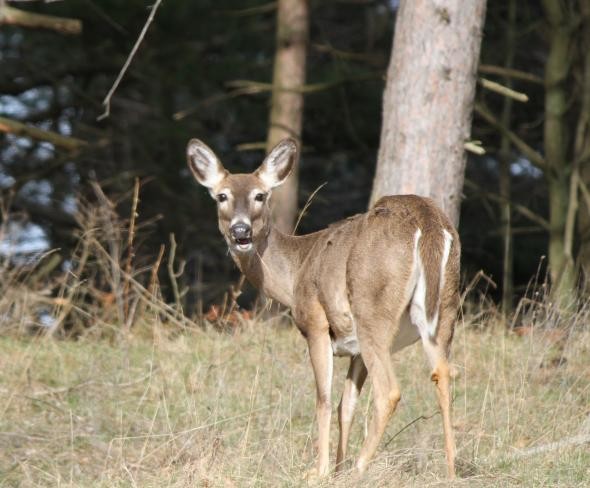 Walker Calls For Emergency Rules To Slow Spread Of CWD

New Regulations On The Way For Deer Farms, Hunters
By Rich Kremer
Share:

Gov. Scott Walker is calling on the state to be more aggressive in its response to the spread of chronic wasting disease with a list of emergency rules that deal with fencing requirements and transportation of live and dead deer.

In a press release issued Wednesday morning, the governor laid out a three-part plan that includes the creation of new rules for the 376 registered deer farms and hunting ranches in the state. Walker ordered the state Department of Agriculture, Trade and Consumer Protection, which regulates deer farms, to create an emergency rule requiring enhanced fencing.

Deer farms are required to have a single, 8-foot fence. The new rule would require a second fence, an electric fence or an impermeable physical barrier.

Walker also called on DATCP to create an emergency rule banning the movement of live deer from farms and hunting ranches in CWD-affected counties. In March, concern was raised in Bayfield County after it was announced that 22 deer had been transferred to a hunting ranch there from a deer farm in Kewaskum that had tested positive for CWD in February.

In an email, DATCP spokesman Bill Cosh said the state Veterinarian Dr. Paul McGraw was out of the office and that the agency declined to comment on this story.

"We’ll be working this summer to get rules in place for the hunting season this fall and we think we do need to be doing more in this area," said Loomans. "We have regulations currently but they’ve kind of become out of date."

Loomans said that’s because current law allows hunters to move carcasses from places that have a high prevalence of CWD, like Iowa County, to other counties that are listed as CWD-affected but may have a lower prevalence of the disease.

"And with the distributions of positives that we have now that rule is not really effective," said Loomans. "You can actually move carcasses fairly freely under current rules even though some of the areas where CWD has been identified, it has been simply one deer or it may not even exist in the wild."

In his press release, Walker said the new rules will help control the spread of CWD in Wisconsin and will compliment a state CWD response plan initiated in 2010.

"We need to protect Wisconsin’s hunting traditions and long-standing heritage by working together to contain the spread of chronic wasting disease in deer," Walker said. "Wisconsin put together a comprehensive plan years ago that implemented new testing procedures to identify and root out CWD while committing to new steps to combat CWD. Today, we will move forward on implementing new rules that will place us among the leaders in the nation’s fight against CWD."

State Rep. Nick Milroy, D-South Range, has been among lawmakers calling on Walker and the Republican majority in the state Legislature to do more to address CWD since 2016. Milroy said the governor’s call for emergency rules on fencing and transferring live and dead deer are important first steps.

"I hope this is just the start of the conversation, that we can continue to learn more and understand more about this disease, and put in place rules and regulations that are going to limit the spread to other counties," said Milroy, but added he’d like to see the Legislature take even more aggressive steps.

"I think the things we need to look at are a moratorium on any new deer farms until we can get a handle on this disease, specifically as it relates to deer farms, and I also think we need to seriously consider a statewide baiting and feeding ban," said Milroy.

State Sen. Rob Cowles, R-Green Bay, also applauded the governor’s call for new rules on CWD. He said Wisconsin’s deer hunting tradition "has been put more and more at risk by the spread of CWD."

"Today’s announcement of new administrative rules by the governor to combat the further spread of CWD is a welcome step towards ensuring the future of Wisconsin’s deer population is healthy and the future of Wisconsin’s deer hunting tradition is strong," said Cowles. "I commend the governor on this announcement and hope to see DATCP and DNR expedite the rulemaking process."

The group Whitetails of Wisconsin, which advocates for the state's deer farming and hunting ranch industry, did not immediately respond to requests for comment on the governor's proposed rules. In the past, the group has said that deer farming is highly regulated and that deer are routinely tested for CWD.