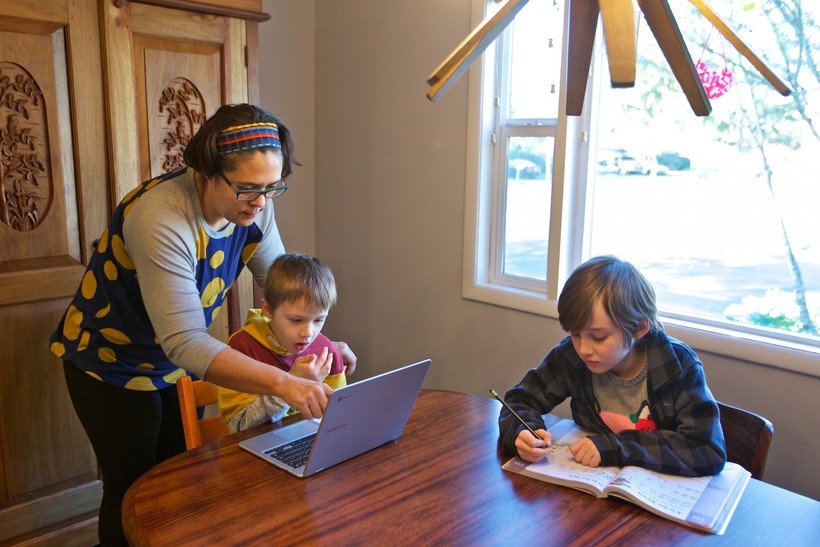 In this March 17, 2020 photo an Orgeon women helps her sons with online lessons. Craig Mitchelldyer/AP Photo

If Rural Virtual Academy hadn't decided to cap its overall enrollment at about 1,500 students for this school year, Principal Charlie Heckel thinks the school could have easily doubled in size.

RVA opened in 2005, making it one of Wisconsin's oldest still-operating virtual charter schools. Its enrollment for the 2019-2020 school year was 1,006 students, according to DPI data, though Heckel puts that number closer to 1,100 students.

"We know that that (cap) limited opportunities for some additional children who maybe wanted to get in," Heckel said, "but we did not feel comfortable jeopardizing the quality of what we have in place by taking on too many new kids, too many new teachers, too many new staff."

He said he thinks that based on the interest from families, as well as what he heard from colleagues working in virtual charter schools in other parts of the state, RVA could have enrolled 3,000 students for the 2020-21 school year.

Other virtual charter schools have expanded in response to growing demand as well. Wisconsin Virtual Academy is one of three charters housed within the McFarland school district, all run by the company K12. The other two, Insight School of Wisconsin and Destinations Career Academy, didn't see as much of an increase, but WIVA gained about 1,000 students, up from 2,000 total across its K-8 and high school in 2019.

Enrollment in virtual charter schools had been growing before the pandemic, but interest spiked this year.

"That has been definitely, I would say, a result of COVID, and families looking for a solution to have their children have some consistency in education," said Susan Stewart, interim president of WIVA, ISWI and Destinations. "We've been doing this for a long time, and so our infrastructure — our online school, our processes and procedures, how we onboard teachers and families — has been established."

Stewart said she thinks the distribution of where students come from has remained pretty steady as enrollment has jumped. Some of WIVA's students are zoned for its district, McFarland, but many are from other parts of Wisconsin. They are getting more younger students now than usual, though.

In Lake Geneva, which is home to a virtual charter elementary school as well as a high school, enrollment spiked from about 27 students last year to more than 60 this year, according to Jan Eckola, director of curriculum and instruction for the district.

The pandemic is also, in some cases, attracting a broader range of students to schools. Pre-COVID-19, Stewart said students came to WIVA for a variety of reasons. Some wanted classes they couldn't get through their zoned school, while others had been bullied and wanted to get out of that environment. Some students had their own kids at home, and needed to finish schooling while juggling childcare.

WIVA is still attracting those students, Stewart said, while also bringing in new families who might not have considered virtual schooling before COVID-19 made it a necessity.

Heckel, with RVA, said virtual charters are appealing more to students with medical conditions that make them especially wary of in-person learning during the pandemic, whose home districts might not be offering the kind of virtual options they want.

RVA is operated out of a consortium of 40 Wisconsin school districts. Heckel said that pre-pandemic, the school pulled about half its students from those 40, and half from open enrollment out of other districts. Though the pandemic may have changed who in both those groups was interested in a virtual charter school, he said the proportions have stayed about the same with the 400 or so new enrollees — about 50-50.

Virtual charter schools have also seen a jump in requests from districts for help in setting up a virtual curriculum, as many are either going all-virtual themselves, have in-house virtual options for families who want to keep their kids home, or have set up a virtual contingency in the case of COVID-19 closures.

Moving forward, Stewart said WIVA is trying to shore up student engagement, and working to improve scores in math and English. WIVA scored behind its home district, McFarland, and behind Wisconsin as a whole on math achievement and growth in its 2018-19 annual report cards for both the K-8 school ("meets few expectations") and the high school ("fails to meet expectations").

"We have people that call the students if they're not engaged, so we're very much aware that we need to continue to innovate, to reach out to families, and find solutions so that the report card will show all the effort that's currently going into educating all the students," Stewart said. "We're hoping that this year we're going to see some really good jumps in our performance."

Heckel credits RVA's relatively high marks in the annual report card in part to the self-selection among families who were choosing virtual school before COVID-19.

"Families that choose a public virtual school option typically have parents that want to be really involved with their children's education," he said. "When parents call here, email us or talk to me, I make a promise to them that this is a high-touch virtual school, our teachers meet with kids daily and we offer live daily instruction with kindergarten, so we stay very engaged with the families and the students."

While this year brought a boom in interest and enrollment, virtual charter schools aren't banking on it outlasting COVID-19.

"What we don't know, obviously, is when schools do reopen, if those students will decide to stay in virtual education or if they'll want to go back," Stewart said.

Heckel said RVA hired 17 new staff members for this school year. He was hesitant to go beyond 1,500 kids in part because that would require investing in new devices and other infrastructure that might not be necessary next year, as well as even more new staff.

"We don't want to be hiring people here and then letting them go in a year," he said.