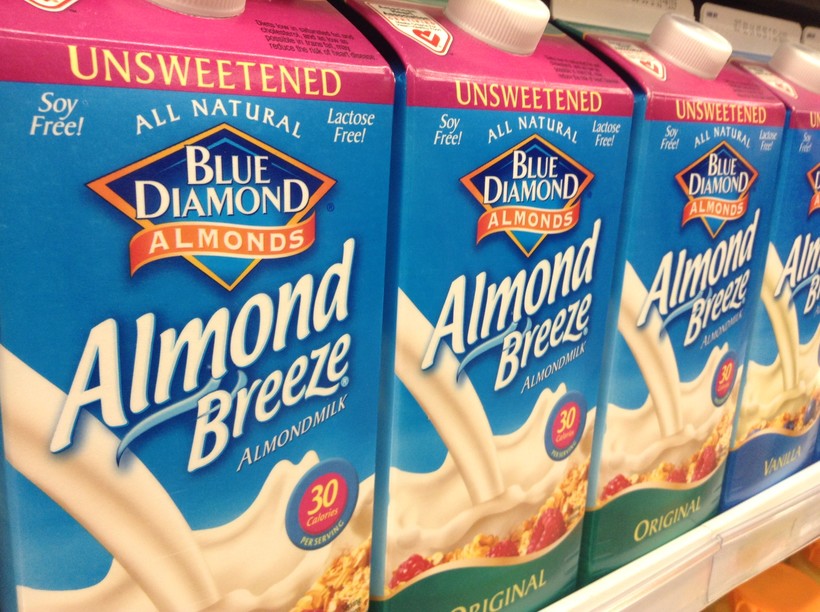 Alternatives to dairy milk include options made of soy, amond, and hemp. Photo:  Mike Mozart (CC-BY).

Public Comment Period Coming To An End As Federal Officials Consider Cracking Down On Plant-Based Milks
By Hope Kirwan
Share:

A national poll found half of surveyed consumers think soy milk, almond milk or other plant-based drinks should not be labeled "milk."

The online survey was conducted by market research firm Ipsos and commissioned by Dairy Management Inc., an organization funded by the national Dairy Checkoff Program.

One survey question asked consumers whether plant-based milk alternatives should get to use the term "milk" if they are not recommended as a substitute for dairy milk under federal dietary guidelines.

Forty-nine percent of survey respondents said no, but another 31 percent said they weren't sure.

The issue of labeling plant-based milk alternatives is something the U.S. Food and Drug Administration has been taking public comment on since September 2018.

The agency extended the original comment period until Monday, Jan. 28 after receiving requests for an extension.

In a notice on their website, FDA officials said the agency "believes that the extension will allow adequate time for interested persons to provide input without significantly delaying any potential further action on these important issues."

Scott Rankin, head of the Food Science Department at the University of Wisconsin-Madison, said the extension reflects how complicated the issue is.

"In the last decade, maybe five years, we’ve seen this terrific proliferation of different types of these sort of plant-based beverages," Rankin said. "I think people are trying to understand how to respond to (the FDA) correctly, what type of opinions they should be sharing. Is this a regulatory issue? Is this an issue about nutrition?"

Dairy supporters have been asking the FDA to crack down on plant-based alternatives for years. Federal regulations define milk as the lacteal secretion of one or more healthy cows. Dairy industry advocates say alternative products that carry the name "milk" mislead consumers into thinking they’re buying a product with the same nutritional value as dairy.

"It's going to be increasingly an important issue as technology creates ever more complicated alternatives to dairy products," Bjerga said. "Dairy is just one part of this broader battle, but dairy winning this battle is very important for the future of food and agriculture so that products will have integrity and consumers will know what they are buying."

But those in favor of plant-based milks argue consumers already know they’re buying a product that's different from dairy milk.

Amberlea Childs owns Plant Joy, a food and health company in Milwaukee. She said consumers are seeking out plant-based milks because they want something different.

"We shouldn't hold the non-dairy industry captive because they’re doing well," Childs said. "At the end of the day, if the product name has to change, I guarantee that’s not going to change the decreasing sales of dairy and the increasing sales of plant-based milks."

Childs said she is in favor of the FDA strengthening their oversight of food labels and taking a closer look at product claims about health benefits.

"My hope would be that there would be better clarification on the differences of our products," Childs said. "That doesn’t have to be with a title, but maybe we come to better labeling standards, maybe there has to be words that describe your products better."

After the public comment period closes, it’s unclear how quickly the FDA will issue a decision on the subject. Many agency employees are still furloughed under the federal government shutdown. Bjerga said it’s hard to know how the shutdown will impact the timeline.

"You would think an extended shutdown would delay action. But since it's always hard to tell how long it will take them to take action in the first place, I don't know if we’re going to be able to say they did it that way because of the shutdown," Bjerga said.