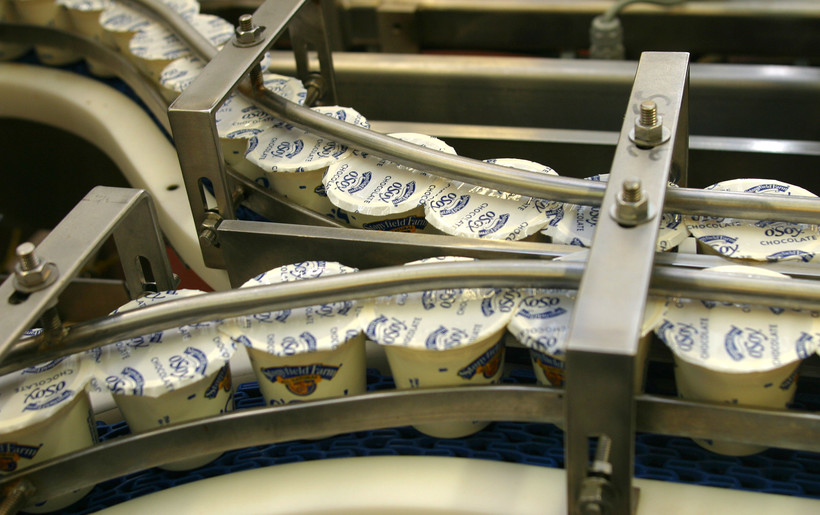 Chocolate O'Soy, one of Stonyfield Farm's new dairy free cultured soy products, rides a conveyor on it's way to packaging and finishing at it's Londonderry, New Hampshire facility on May 22, 2003. The yogurt maker produces 40,000 cases of O'Soy a month. Larry Crowe/AP Photo

The data from Nielsen shows soy milk, almond milk and other plant-based products made up 13 percent of total milk sales at United States grocery stores in the last year. That's up from 9 percent in the year before.

"There are so many more good tasting options on the market that we never saw before, so I think that’s what’s driving a lot of the growth," said Michele Simon, executive director of the Plant Based Foods Association, a trade group that commissioned the Nielsen study.

The report comes a week after the U.S. Food and Drug Administration released more information about how it plans to evaluate the use of dairy terms like "milk" and "cheese" for plant-based foods.

"In addition, some of these products can vary widely in their nutritional content — for instance in relation to inherent protein or in added vitamin content — when compared to traditional milk," Gottlieb said in the statement. "We intend to look at these differences in relation to potential public health consequences."

The agency plans to collect feedback from stakeholders and the public over the next year before issuing new guidance for the industry.

The review has long been pushed for by the dairy industry. Wisconsin Democratic U.S. Sen. Tammy Baldwin has introduced legislation in the past to prevent non-animal products from using dairy terms.

Rankin said milk was first exclusive to cows, but now includes all milking animals. But he said extending that term to include plants may not be fair to farmers because of extensive regulations applied to dairy milks.

"A dairy farmer needs to abide (by) hundreds of pages of regulation in order to make 'milk.' So they spend enormous amounts of energy and resources. If they do something wrong, literally it's not 'milk' anymore," Rankin said.

He said plant milks don’t face the same regulatory burden, so it’s unfair that they should get to use the same name.

But producers of dairy alternatives say the FDA is the one creating an uneven playing field.

"That is a highly anti-competitive stance that they’ve taken," said Jim Richards, CEO of Milkadamia, a company in Illinois that makes milk and creamers from macadamia nuts. "They’ve chosen to support one part of the industry over another. Nut farmers, they’re farmers too. They work just as hard as dairy farmers. Their products are just as legitimate."

Because of the pressure from the dairy industry, Richards thinks the FDA will eventually prevent plant-based foods from using dairy terms. But he’s not worried about losing customers.

"They won’t win back one single person from non-dairy back to dairy. People aren’t leaving because they’re confused or because it's called milk or not being called milk. They’re making a lifestyle choice that’s not going to be affected by the censorship of one very powerful political group," Richards said.

Related Links:
WisContext: Dairy Defends Its Turf Over The Definition Of Milk