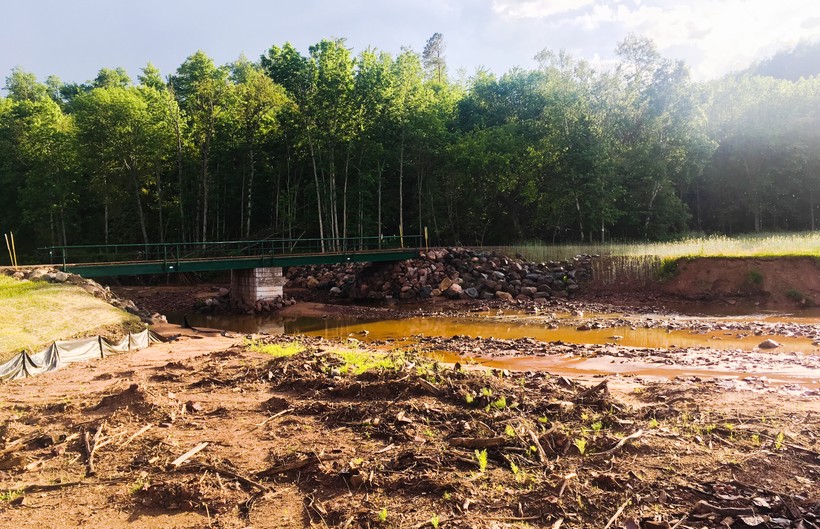 In this photo taken in July 2017, damage can be seen at Saxon Harbor by the Oronto Creek. Saxon Harbor sustained an estimated $10 million in damage from the July 11, 2016, storm. Officials are still assessing the cost to rebuild the harbor.

One year ago Tuesday, heavy rains flooded northern Wisconsin, leaving behind a wide band of devastation. The storm claimed several lives, washed out dozens of roads and caused $26 million in damage to public infrastructure. Homes and businesses sustained millions more in damage.

Some of the hardest hit areas are still recovering, and it may be several years before all the damage is repaired.

Standing on the shoulder of U.S. Highway 2 near Odanah, Ed Kolodziejski with the Bad River tribe pointed out a portion of the road near Denomie Creek severely damaged in the July 11 flood. 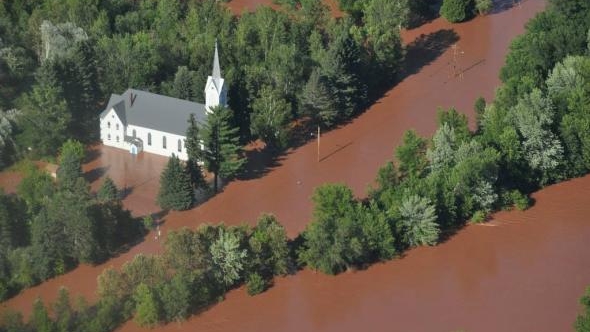 Flood waters surround the Bad River reservation in northern Wisconsin after a storm dumped as much as 10 inches of rain in a single night in the July 11-12, 2016, storm. Photo courtesy of the Bureau of Indian Affairs

"The bridge was still there, but all the riprap on both sides — that was flushed away," he said. "The eastbound side of the highway was washed away."

The flooding caused more than $5 million in damage to the Bad River reservation’s roads. Downed trees and twisted culverts blown out by floodwaters still line the road banks.

"We still got places out there that are not passable yet because of washouts," said Bad River Tribal Chairman Robert Blanchard. "We have a number of homes that have been affected. Those are being taken care of through imminent threat grants through our housing, so people are getting the help that they desperately need to make their home livable again."

Around 10 homes were damaged on the reservation. Hundreds more homes and businesses were impacted across the eight counties also included in a presidential disaster declaration last August.

So far, the Federal Emergency Management Agency has awarded Wisconsin about $8.2 million. But FEMA is still working with local officials to assess the damage to Saxon Harbor, which is estimated to have at least $10 million in damage to the 90-boat slip marina and campground.

The harbor is a shell of what it once was. The Oronto Creek trickles through a path carved out by rushing water that washed boats miles out into Lake Superior. Segments of road and pipe sit in a hole where the bridge over the Oronto used to stand. A temporary bridge has been installed to connect those living on the other side of the creek to Highway A, but a permanent plan to rebuild is still in the works.

Thunder rumbled overhead recently as Sally Nelson and a handful of customers chatted with one another over drinks at the Harbor Lights Restaurant and Bar on Saxon Harbor in Iron County. Nelson spent many days at the harbor, growing up just a few miles away on Little Girl’s Point.

"You can’t believe how beautiful it was before the bad storm," she said. "It’s unbelievable the damage. It’s hard to believe. We feel so sorry for Grace and Bill."

Grace Hines and her husband Bill have owned Harbor Lights overlooking the harbor for more than 40 years. Now, business is down more than 60 percent, and Grace Hines said the recovery seems to be moving at a snail’s pace.

"One thing depends on another, depends on another. That’s what gets frustrating and that is what we’re getting the questions on as people come in now. 'It’s been a year. Why does it still look like that?'" Grace said. In neighboring Ashland County, highway commissioner Emmer Shields said they’ve repaired about 90 percent of road damage. In some cases, the flood tore through culverts with an eight-foot diameter, sending them a quarter mile down the road.

Shields said many of the pipes damaged were replaced by the same sized pipes.

"We put back the ones that were already there ... because you can’t design for a 500-year or 100-year storm," he said. "You can’t do it. The road is going to go out. I don’t know if there’s a pipe big enough. You’d have to put a bridge over every crossing."

Roads are engineered to withstand a 100-year storm event under current state standards, but Shields said he’s seen about a dozen 100-year storms in the last 30 years in northwestern Wisconsin.

The state upgraded culverts and made improvements where possible while trying to restore travel routes as quickly as possible last summer, said Gary Brunner, chief project development engineer with the Wisconsin Department of Transportation. And while making quick and quality repairs is crucial, Brunner said there is a need to look at how the state plans for storms like the one that ripped across northern Wisconsin.

"We do know that evidence is pointing towards increasing frequency of large events like this," Brunner said. "I don’t think the standards have really caught up in terms of how we should try to design for the future, because you also have to think about how are we going to pay for designing for the future." 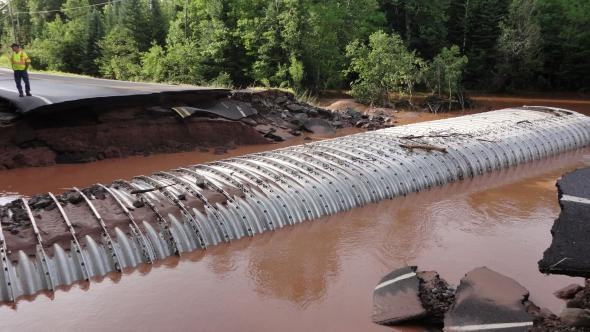 Brunner said it would break the bank if every local government tried to engineer roads to withstand 500-year to 1,000-year flood events like last July’s flood. Many towns have struggled to pay for repairs just to return them to their condition before the storm. Some local governments who have finished work are still waiting to be paid.

Shields, of Ashland County, said that could stress his department’s budget since the county fixed some of the damage for the towns.

"The towns we know can’t pay until they get the funds. And, in some cases, the towns that weren’t working with us borrowed money to pay contractors who have already been paid, but they’re still waiting for the money," Shields said. "They’re paying interest on loans they took out to get this work done."

Covering The Costs Of Repairs

Even though Wisconsin has received $8.2 million in funding from FEMA, the state can’t provide reimbursement for repairs until projects are 100 percent complete and all the paperwork has been submitted, said Lori Getter with Wisconsin Emergency Management.

"We understand it’s frustrating because for many small communities, when the damage occurred a year ago, it really hit hard on those local budgets," she said "But, again, we need to follow those procedures and policies and make sure that the work is completed before we reimburse."

Wisconsin Emergency Management previously reimbursed communities when projects were 75 percent complete, but the agency changed its policy in early 2016. Getter said the shift was made to comply with federal audits on how disaster money is spent. In some cases, the state has had to reimburse FEMA for funds that were allocated to projects that were never finished. 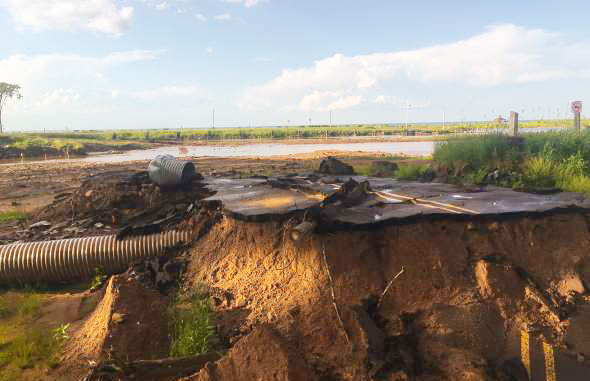 So far, a little more than $2 million has been paid out to state and local agencies for flood repairs in northern Wisconsin.

"I think people would be surprised to learn that we have projects that are going to take several years to complete, such as Saxon Harbor," Getter said. "We’re not going to start the campground until next year, so it’s going to take some time to get some of these roads and bridges and everything repaired."

Yet, Harbor Lights co-owner Grace Hines said no one thought the recovery was going to happen overnight.

"As a whole, I just want to get through July and know that nothing more is going to happen down there to make it harder and harder for it to be fixed," she said. "Because it just goes on."

Grace and her husband Bill plan to stick it out for as long as they can.