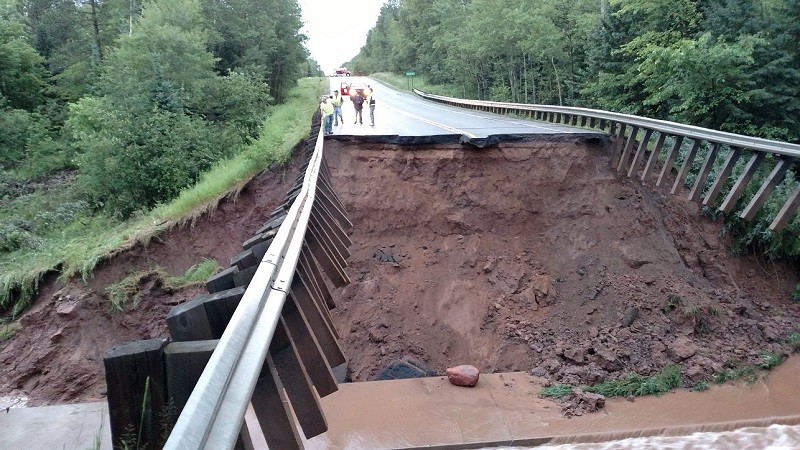 A section of Highway 63 north of Grand View in Bayfield County is washed out by flooding from intense rainfall overnight.

$1 Million In Damages Estimated In Ashland And Bayfield Counties
By Danielle Kaeding
Share:

Wisconsin Emergency Management officials are working with several agencies and counties to address washed out roads and flooding in northern Wisconsin.

As much as 10 inches of rain fell overnight across parts of northern Wisconsin. Wisconsin Emergency Management spokesman Todd Pritchard said they’re still getting an idea of the damage.

"Ashland, Bayfield and Iron counties were hit pretty hard on this one," he said. "We are getting reports that Saxon Harbor has some pretty substantial damage. A lot of boats that were in that area were damaged."

"Anything over 70 to 80 miles per hour is not out of the question ... We’re talking tornadic-strength winds," she said.

Christenson said no injuries or fatalities were reported at the Saxon Harbor marina or campground.  Eric Peterson, forest administrator for Iron County, said a few boats sank in the harbor and 19 boats were swept out into Lake Superior before they washed ashore west of the harbor.

"The harbor is essentially not there anymore," Peterson said, noting that the Oronto Creek is now flowing through the nearby campground.

"We were very, very lucky that this did not happen on a weekend," he said, adding that roughly 2,000 people use the marina and campground each weekend during the summer.

Peterson said Saxon Harbor has sustained at least $10 million in damage. He said the county will need to pursue state or federal disaster relief in order to rebuild.

In Ashland County, the county’s emergency management director Dorothy Tank said the damage appears worse than the June 2012 flood that resulted in a federal disaster declaration there.

"There is still standing water, but there is a significant amount of washouts. The washouts have completed eroded the roadways away," said Tank. "It has made the roads totally impassable."

WEM's Pritchard said Ashland and Bayfield counties are estimating at least $1 million in damages to roads, bridges and infrastructure for each county. Other counties are still assessing the extent of the damage.

"It’s going to take some time to get (roads) repaired," he said. "There’s certainly going to be an impact to people traveling, to the economy up there. That’s something I think is going to be a part of the long-term recovery."

Sections of roads are closed, flooded or washed out in Ashland, Bayfield, Iron, Sawyer and Washburn counties. Parts of U.S. Highway 2 and State Highways 13, 77, 122, 137 and 169 are impassable. Officials are advising people to stay off the roads.

In addition, Monday evening's storm left 11 kayakers stranded on the shore of Sand Island, according to Chris Smith with the Apostle Islands National Lakeshore. Smith, chief of visitor and resource protection, said U.S. Coast Guard and National Park Service vessels were sent to retrieve the kayakers. They were transferred off the island around midnight.