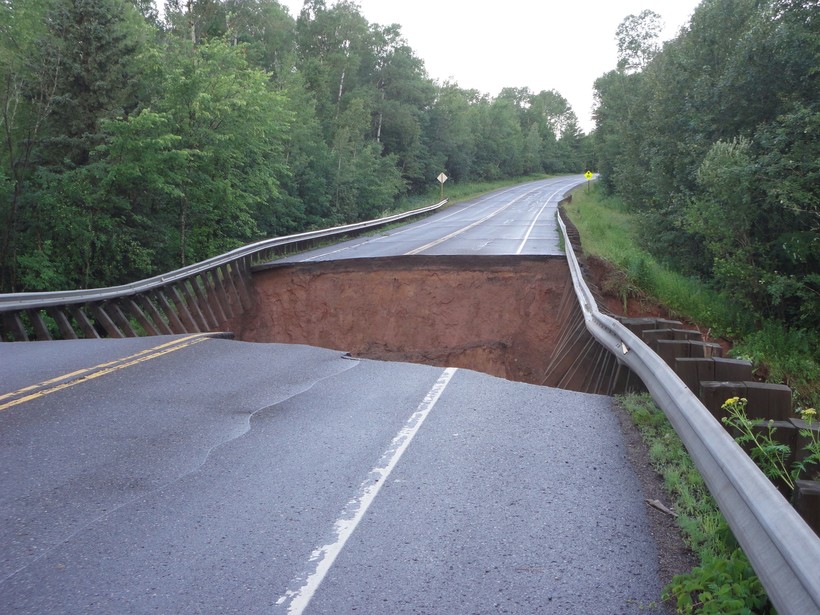 A section of U.S. Highway 63 near Grand View was washed out during the July 11 storm. Local officials hope to re-open the highway this week.

Eight counties and one tribe in northern Wisconsin can now access federal money to help pay for an estimated $25 million in flood damage to roads and public infrastructure after the July 11 storm.

Bayfield County is one of the areas hit the hardest by the storm, and its county administrator, Mark Abeles-Allison, said the federal disaster declaration is good news for northern Wisconsin.

About 87.5 percent of the expenses to repair roads, bridges and other public infrastructure will be covered by the public assistance, Abeles-Allison said.

Roads and highways are under repair and towns continue to clear trees from a wind storm that followed the flood, Abeles-Allison said.

"There’s been a tremendous amount of local effort—neighbor helping neighbor, town helping town—that’s really been heartwarming and is really important when disasters like this occur," he said.

The grants would pay to replace most losses to homes, Abeles-Allison said.

The Duluth Superior Area Community Foundation has also announced that the Otto Bremer Trust of St. Paul, Minnesota, will assist disaster victims. The trust has agreed to match up to $25,000 in donations to set up a fund to help residents in Ashland and Bayfield counties.

"People are still displaced from their homes," said Meghan Dennison, the foundation’s regional affiliate officer in Bayfield. "There are still folks that have standing water in their basements, which is causing mold to grow. Children with asthma issues are having difficulty. There are still at least 50 or so people in the city of Ashland area that don’t have hot water heaters or furnaces that are working."

Dennison said grants up to $5,000 will be available to local governments and nonprofits to assist with flood recovery.